A series of apricots from the Carmingo range are among the new varieties invested in over recent years by dps, one of the main year-round suppliers of stone fruit and […]
Tue 02/06/2015 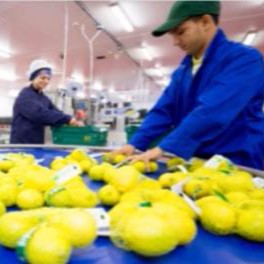 A series of apricots from the Carmingo range are among the new varieties invested in over recent years by dps, one of the main year-round suppliers of stone fruit and exotic fruit to UK retailers.

“We sold 8 tons last year and hope to have more than 10 times that available this year,” said Paul Beynon, managing director of the London-based family company which expects turnover this year of about £54 million, up from about £46 million last year.

The joint venture in the Carmingo apricots, which originated in France and have better quality eat and a longer season than other varieties, is an example of dps’s constant push to deliver what end customers want.

About a tenth of its business is evenly split between the food service and processing sectors but since 1998, dps has been focused on supplying major retail programmes in the UK and Ireland. Tesco, for example, has been one of its major clients for over 30 years.

The company keeps its eye on what’s happening at the consumer end of the supply chain. In an interview with Eurofresh Distribution, Beynon spoke of a range of ways – including meeting consumers at the shelf edge, focus groups and online surveys – dps uses to increase its understanding of those who eat its fruit.

One of the trends it has identified is that when buying stone fruit, such as peaches and nectarines, UK consumers increasingly prefer to buy them ripe. In response, dps has invested in different varieties and spent about £750,000 over the last four years to increase its ripening capacity in the UK to six ripening units.

Beynon said British consumers are also showing strong demand for home-grown produce. The British-grown apricot and cherry offer is growing quickly, while that of plums is more stagnant.

Overall, dps’s main products in summer are peaches, nectarines, kiwis, apricots, cherries and plums. In terms of the company’s total product volume, homegrown produce accounts for about 10–15% in the case of cherries, and 5–10 % each for plums and apricots.

The products where the company is seeing demand grow most are apricots – last year the value of dps’s apricot sales was 100% higher than in 2013 – and the sharon fruit.

Most of dps’s Northern Hemisphere produce comes from Spain and arrives by lorry, while most of that from the Southern Hemisphere comes by ship, mostly into London Thamesport and Tilbury, and a small amount by air.

Revival of demand for organic produce

Beynon said demand for organic fruit was static, if not receding, in the early days of the recession, but in the last 12 months has improved. “It’s now growing again and there’s no reason for that to stop,” he said.

Though it does not have a produce brand – all the produce it procures for retailers is sold under their brands – as previously mentioned, dps takes great interest in engaging with and understanding the end consumer.

“What we find is it’s about quality, taste and shelf life,” Beynon said. Aesthetics get consumers to pick up a product but consistency in the latter three is what keeps them buying it.

An example of dps’s ongoing innovation to address these factors was the launch of a 6-fruit pouch in its kiwi line. More aesthetically pleasing than a punnet and net, it helped drive sales.

Why shortening the supply chain is crucial

Beynon also talked about the importance of shortening the supply chain – and making it as responsive and efficient as possible – in order to ensure the freshest quality and reduce waste, and thereby costs.

With the advent of new money in the big, newer powerhouses, such as Brazil, China, the Middle East and India – dps’s sources now have many more options as to where they sell their product.

The days of Britain being the number one place to do so is not quite the case now, Beynon said. To have the best chance of securing produce from desired sources means having the most efficient supply chains. “The more efficient the supply chain the higher the grower return you can provide.”

How freight, labor costs have changed the supply chain dynamic

Beynon said dps thus constantly evaluates the way it brings product from source. For example, with plums from South America it used to bring them over in finished punnets but now tends to ship them bulk after an increase in freight prices in recent years. “It’s very important to fill that transport because that cost probably outweighs those for higher labour cost.”

In the past, higher labor costs in the UK meant DPS preferred not to pack there. “Now, due to higher freight costs, it works out more economical to pack efficiently in the UK,” he said.

Category: Uncategorized
Tags: dps, stonefruit, UK
We use cookies on our website to give you the most relevant experience by remembering your preferences and repeat visits. By clicking “Accept All”, you consent to the use of ALL the cookies. However, you may visit "Cookie Settings" to provide a controlled consent.
Cookie SettingsAccept All
Manage consent