What should the next generation of wholesale markets be like? Ioannis Triantafyllis, member of the board of the World Union of Wholesale Markets, recently set out his vision for the […]
Tue 03/04/2018 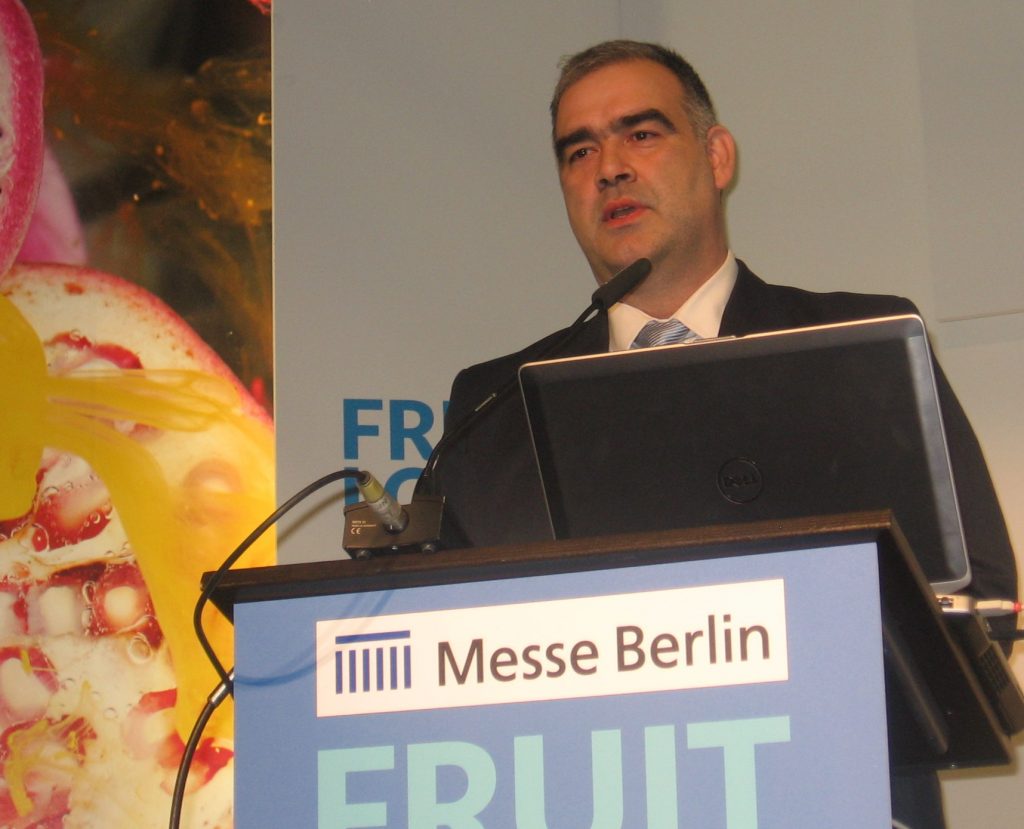 What should the next generation of wholesale markets be like? Ioannis Triantafyllis, member of the board of the World Union of Wholesale Markets, recently set out his vision for the future, one in which markets will still be close to the cities they feed while harnessing the latest in green and cold chain technology. At the Fresh Produce Forum at Fruit Logistica in Berlin in February, his presentation was part of a session titled ‘Wholesale Markets 3.0 – from distribution centre to food hotspot’. Triantafyllis, general manager of the Central Markets and Fishery Organisation in Athens, said the markets of the future should be near cities, or hubs or ports, but not necessarily in them. They must be the location for “functional shops”, with loading and unloading docks and whatever other facilities the wholesalers need, especially the meeting of cold chain requirements. As for the number of merchants, Triantafyllis argued for a critical mass only – not a lot, but also not too few, to avoid any monopolisation. Tomorrow’s markets should also have the latest in sanitation, environmentally-friendly (green) technology, be technologically ready and also socially responsible, he said.

What’s wrong with today’s markets?
Triantafyllis had started his presentation by looking at the many challenges facing the world’s wholesale markets today. Why are wholesale markets so unpopular, he asked. Among the reasons are that they are blamed for unnecessarily occupying urban space, for traffic congestion and waste production, and for being unnecessary in the long term, he said. “But someone has to feed the city. How can you feed the city when far away from it?” Triantafyllis stressed that the New Covent Garden Market is in central London and Rungis, which he said is considered the most successful wholesale market in the world, is just 6 km from the centre of Paris. As for concerns about markets causing traffic congestion, he said the alternative to trucks going into a central market would be for them to be spread about on city roads. Triantafyllis also pointed to other solutions, such as at Mercazaragoza, where it is possible to simultaneously load two 600m-long trains. “One rail equals four trucks so just imagine 40 of them,” he said. As for concerns about food waste, he said he believed the amount occurring was probably less than commonly thought. The Melbourne market, for instance, produces around 5,000 tons of waste annually and achieves a 95% recycling rate. Similarly, Mercabarna has a recycling rate of more than 80%.

The problems facing many markets
Among other challenges facing the wholesale markets in Europe is that most were built more than 40 years ago and so tend to be aging facilities. As they are also often owned by state or municipal authorities and their capital turnover is not so fast, it is difficult to find a private company willing to invest large amounts of money that is going to deliver slow returns, Triantafyllis said. Other problems are that the businesses inside markets are often family owned and run along old business models by people with no specific business education. There is limited use of marketing, technology and traceability, lack of central management and networking, and the level of merchants is not homogenised. Adding to the challenge is the rapidly changing environment within which markets operate, including stricter food laws, and the need to be ‘greener’ and better manage and reduce waste – which Triantafyllis said is the biggest problem – as well as to optimise logistics management, such as by adoption of last mile policies and use of urban consolidation centres (UCCs). The latter are things that are going to come in in our lives and most markets are not ready for them, he said. Quality market management is also essential but in order to make the necessary leap to modernity, many changes are needed than the states or local governments that own the markets need to be willing to allow. Added to that is the need for funding, such as to fix up the many old facilities.

Category: Uncategorized
Tags: Central Markets and Fishery Organisation, FL Fresh Produce Forum, Ioannis Triantafyllis, JB, wholesale markets, World Union of Wholesale Markets
We use cookies on our website to give you the most relevant experience by remembering your preferences and repeat visits. By clicking “Accept All”, you consent to the use of ALL the cookies. However, you may visit "Cookie Settings" to provide a controlled consent.
Cookie SettingsAccept All
Manage consent