Source: Freshfel     With the UK all but certain to leave the EU in 2020, the European fruit and vegetable industry is viewing with great concern the potential impact […]
Mon 06/01/2020 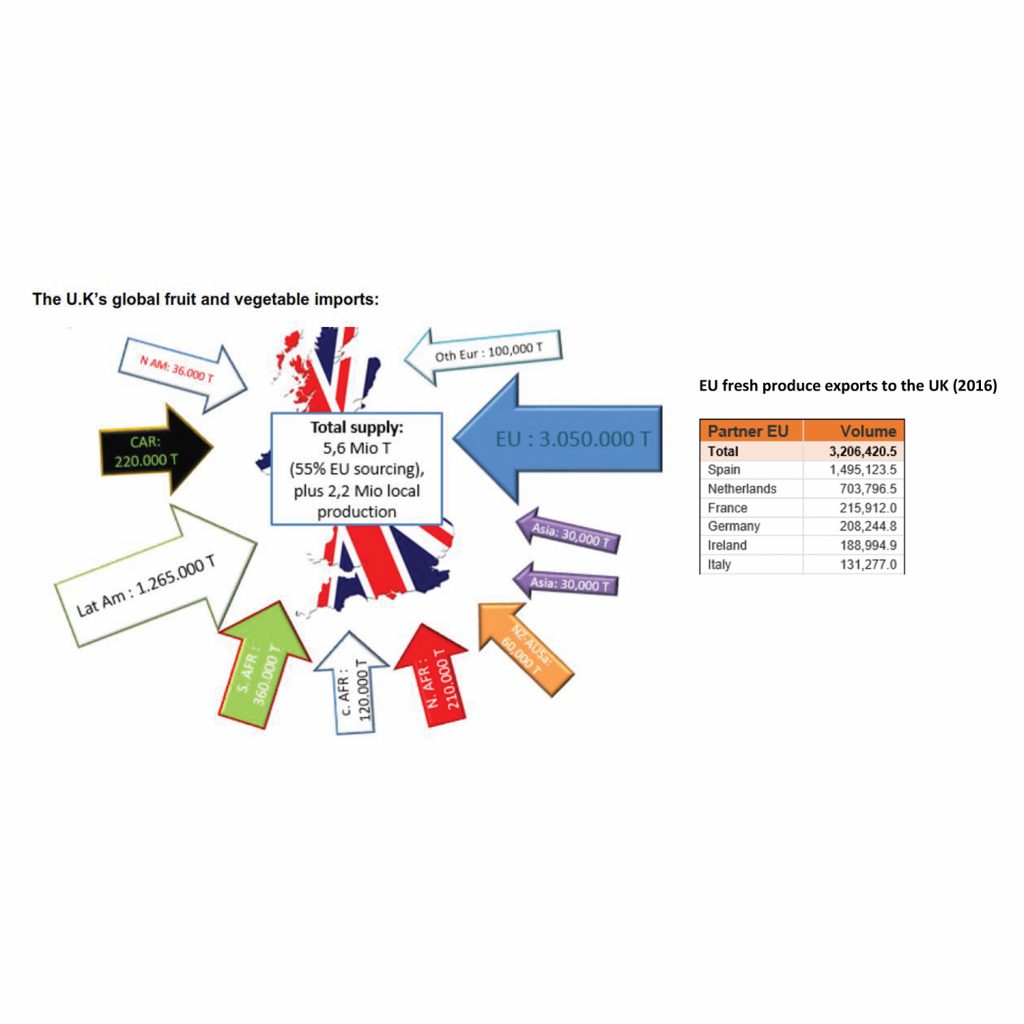 With the UK all but certain to leave the EU in 2020, the European fruit and vegetable industry is viewing with great concern the potential impact this will have on intra-EU trade flows. A recent Rabobank report found that fresh produce will be the most affected food sector following Brexit, along with animal protein. At a time when the EU agricultural sector is still adjusting to the fallout of the Russian embargo, the potential loss of another key market could have devastating consequences.

Loss of trade would be costly on both sides of Channel

For many years now, the industry has benefited from frictionless trade thanks to single-market provisions, with the EU Mainland being a net supplier to the UK. In fact, the UK is the third largest destination for EU fruit and vegetables, receiving 3.1 million tons (€4 billion) of fresh produce each year. The two-way flows between the EU and the UK are worth €3.6 billion and account for about 10% of all intra-EU fresh produce trade. Besides generating large revenues for EU suppliers, this dynamic has left the UK heavily dependent on the EU for its fresh produce, with 55% of all the country’s imports coming from the EU-27 Member States. The main EU imports to the UK are tomatoes (480,000 tons), apples (245,000 tons), onions (230,000 tons), sweet peppers (175,000 tons), and soft citrus (164,000 tons). The largest source by far is Spain, which represents 45% of the total, followed by the Netherlands (22%), France (7%), Germany (6%) and Ireland (6%), with significant volumes imported from third countries via other EU Member States.

So, how is Brexit likely to change this picture? To answer this, multiple aspects need to be considered, such as tariffs, potential quotas, logistical hurdles, customs operations, certification, and tracing. At this point, we can only speculate about the terms of the eventual deal, as the final details of any agreement are still to be established. If the UK leaves the EU without a withdrawal agreement, then it will automatically revert to WTO trading rules in dealing with the EU. This would lead to a new tariff regime in place which would increase costs for operators in the EU and the UK who had previously benefited from zero-tariffs. What is clear, however, is that no extra tariffs will be applied to fresh produce for up to 12 months after the UK leaves the EU.

Secondly, border procedures and customs operations could lead to delays along the supply chain. This could have drastic consequences in the fresh fruit and vegetable trade given the perishability of the products. Trade flows are dependent on swift border procedures and customs clearance. Currently, 130,000 containers of highly perishable products arrive in the UK from the EU each year, with 55,000 containers sent from Spain alone to the port of Dover. The main bottlenecks of the EU-UK fresh produce trade are located at the ports of Dover and Rotterdam, and at the Eurostar connection in Calais. Dover is a very narrow transit port, lacking parking and storage facilities. Any new procedures will place great burden on ports and lead to backlogs, which in turn would compromise the timing of arrival and the quality of the perishable products. Morrisons supermarket chain has announced contingency plans that include switching to alternative ferry crossings, such as Le Havre-Portsmouth, if the Dover-Calais route becomes gridlocked. In turn, the Co-op supermarket chain has stated its intention to use air freight to bring in fruit to avoid empty shelves.

Ireland is particularly vulnerable given its relative geographical isolation. New border controls could result in lower supplies and higher prices for Irish consumers, too. Goods shipped between Mainland UK and Northern Ireland will also be subject to checks by UK and EU officials, which is causing particular distress in Belfast.

The UK may introduce different food safety regulations. This would lead to increased certification requirements, including certificates of origins, quality and phytosanitary certificates, which would constitute a further financial burden on operators. As fresh produce often arrives in mixed containers, with an average consignment comprising 10 different product categories, then based on an annual average of 130,000 containers, this would result in additional cost of up to €65 million in certification, according to a Freshfel report.

UK to turn into a rival for the EU?

The EU is concerned about what steps the UK may take to make itself a more attractive market, to the potential detriment of its European neighbours. When the UK becomes a third-country trading partner, new transhipments rules will need to be defined, governing how produce is stored and handled. If the EU wishes to retain its competitiveness as a logistical hub, it must ensure it continues to be a more attractive logistical environment than the UK, or risk losing trade. Another fear is that the UK will loosen MRL and phytosanitary requirements in order to attract imports from around the world. Such changes would have a knock-on effect on trade within the EU, where stricter rules are in place.

While the movement of citizens is to be guaranteed during the transition period (up to December 2020), the current shortfall in seasonal labour in the UK is likely to be exacerbated and result in higher costs for UK producers. The field of research and innovation is also certain to be affected, with the UK one of the largest beneficiaries of Horizon 2020 funds, receiving €3.3 million in grants. For instance, the “Raditom” research project is investigating the preservation of tomato flavour, while the “EUFRUIT” project involves 12 countries focussing on coordination and information sharing.

Ultimately, the industry fears that the complexities of fresh produce trade with not be adequately considered given the limited time for negotiating exit conditions. Ideally, there would be a longer transitional period than the currently proposed 11 months (until December 2020) to allow a new free-trade agreement to be concluded and grant businesses sufficient time to adapt to any changes. An undertaking to protect the supply of EU fresh produce to the UK would defend jobs and economic growth on both sides of the Channel.

Moreover, if the UK integrates its digital customs services with those of the EU, this would help lubricate trade flows. It is vital not to reverse the great progress the sector has made in recent times. The issuing of electronic organic and phytosanitary certificates via ‘traces’ has greatly improved the monitoring and risk analysis of trade in plant products. The fine balance that has allowed the sector to flourish could be greatly undermined by any variation in price or conditions.

Category: Uncategorized
Tags: Brexit, Brexit impact, EU, Europe, fresh produce, fresh produce consumption statistics, fruit, fruit and vegetable consumption, market research, Markets, Supply, UK, UK market, UK retail, vegetables, wholesale supply
We use cookies on our website to give you the most relevant experience by remembering your preferences and repeat visits. By clicking “Accept All”, you consent to the use of ALL the cookies. However, you may visit "Cookie Settings" to provide a controlled consent.
Cookie SettingsAccept All
Manage consent