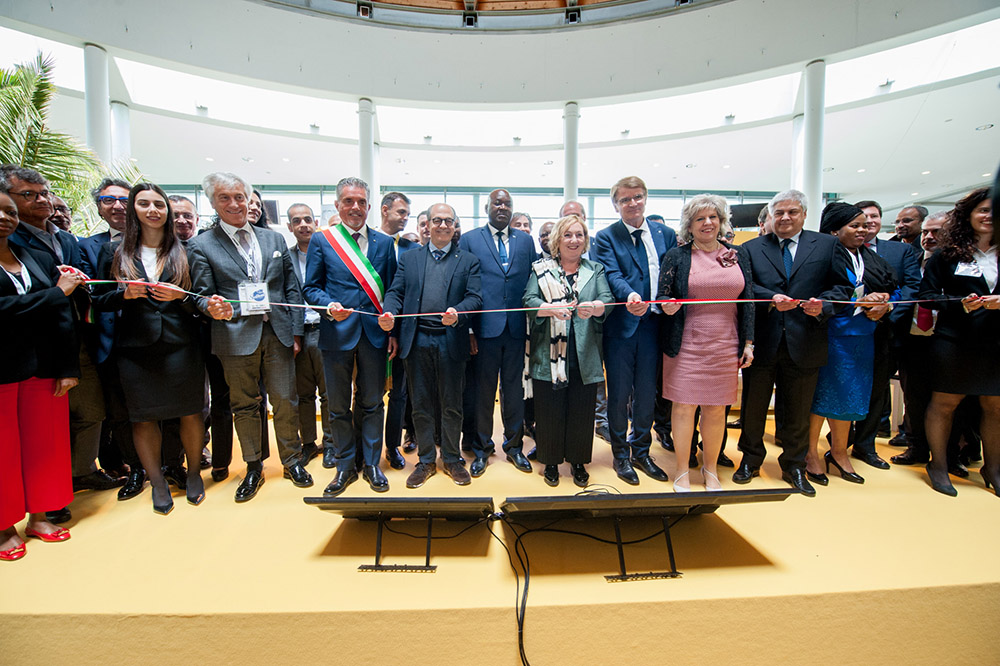 Rimini, 8 May 2019 – The 36th edition of Macfrut, the international trade fair for the fruit and vegetable sector, kicked off today at the Rimini Expo Centre, where it will be held until 10 May. Emanuela Del Re, Italy’s Deputy Minister of Foreign Affairs and International Cooperation, Simona Caselli, Councillor for Agriculture of the Emilia-Romagna Region, Roberto Luongo, Director General of the ICE – Italian Trade Agency, and Thsibangu Kalala, Minister of Agriculture of the Democratic Republic of Congo, took part in the ribbon-cutting ceremony.

As Renzo Piraccini, President of Macfrut, pointed out, ‘In the last editions of Macfrut, the number of exhibitors and visitors has doubled, as well as its turnover, thus bringing together the entire fruit and vegetable sector at this trade fair.’ After welcoming the many states of Sub-Saharan Africa, the International Partner of this edition, and Piedmont, the Partner Region, he also thanked the ICE – Italian Trade Agency for its continuous support throughout the internationalisation process.

Italy’s Deputy Minister of Foreign Affairs and International Cooperation, Emanuela Del Re, stated: ‘Promoting technological innovation, which is what Macfrut does by building bridges between Italian and foreign entrepreneurs involves not only increasing trade exchanges and the GDP but also caring about the future of our planet. Agricultural innovation means fighting child hunger and malnutrition, producing in a sustainable way to reduce the effects of climate change on the agricultural industry, creating employment and development opportunities even in the most disadvantaged communities by sharing technological know-how with them.’

Thsibangu Kalala, Minister of Agriculture of the Democratic Republic of Congo, spoke on behalf of the various African states participating in Macfrut: ‘We will invest in agriculture to create jobs and this is why I am here, to encourage sector professionals to seize the investment opportunities that our country has to offer, which will be of benefit to both.’

The world’s languages at Macfrut

Fifty foreign countries are present with their own stands or delegations, with 25% of exhibitors from abroad. This year’s big novelty is a hall entirely dedicated to Africa: in fact, the Sub-Saharan region is the international partner of this edition of Macfrut. This area currently hosts 200 companies from 14 African states: Angola, Benin, Congo, Ethiopia, Ghana, Kenya, Mozambique, Namibia, Senegal, Somalia, Sudan, Uganda, Tanzania and Zambia.

This year’s edition will include many new features, in particular three “dynamic areas” set up in the exhibition halls, showcasing system innovation. For example, the Greenhouse Technology Village, an area dedicated to greenhouse horticulture innovation, hosting manufacturers of technologies, materials and technical equipment, seed companies and specialist nurserymen; AcquaCampus, a 640-square metre demonstration field dedicated to saving water for agricultural use, with a view to tackling a broader, more innovative theme such as fertigation, as well as climate control for crops, sensors and the use of big data, covering all possible improvements in field management: more technology, lower costs and higher production yields; and Macfrut in the Field, a large area set up in the halls of the exhibition centre featuring a real test field to see the most innovative agricultural machinery in action.

On this opening day, the Macfrut Innovation Award ceremony was also held, which rewards cutting-edge solutions in terms of product functionality, use, technical design, environmental impact, quality and safety.

Category: Uncategorized
Tags: 2019, Macrut, Rimini Expo Centre
We use cookies on our website to give you the most relevant experience by remembering your preferences and repeat visits. By clicking “Accept All”, you consent to the use of ALL the cookies. However, you may visit "Cookie Settings" to provide a controlled consent.
Cookie SettingsAccept All
Manage consent