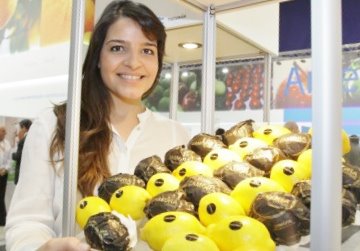 Zamora Citrus is a producer, packer and exporter of fresh Argentine lemons, continuing the lemon production business started by the Zamora family. The company was set up in 1984 and began exporting in 1994. “Our lemon production takes place on our own farms as well as those of third parties, which together add up to more than 700 ha in the province of Tucuman,” Luciana Zamora said.

In 2009, the company introduced a treatment system that minimises the use of pesticides and chemical fertiliser. Zamora Citrus aims to become a specialist in lemon handling, taking care of the environment and social responsibility, while developing a direct and personal relationship with customers.

The latest news from the Argentinian company is the recent installation of the latest technology for preselection lines and packaging on the market. The firm’s products are sold directly to supermarkets and other retail stores in Europe, Canada, the Middle East and Russia under different brands, offering customers a product in keeping with their needs in terms of quality and calibre: San Andres, Zamora, Zamci, Canri and Miss Alicia.

The company warehouse and farms are certificated by BRC-HACCP and GLOBALG.A.P.. “We have incorporated a postharvest treatment system, which decreases the use of chemicals, as well as the LMR allowed to give the customer a more natural and healthier product,” Zamora said.

IDEP Tucumán, the Institute for the Productive Development of Tucumán in Argentina, has celebrated its first decade as an institution that supports exporters.

IDEP is the reference entity on foreign trade. It is run by a diverse board of directors consisting of government officials and entrepreneurs who represent the main production sectors of the province: citrus, sugar, horticulture, metallurgy, tourism and other services.

To celebrate the milestone, IDEP held a cocktail event at the Hilton hotel in Tucumán.

“We welcome this fusion between the public and private sector because it has allowed us to grow as a province, to give visibility to our exporters through participation in fairs and international business circles and help them improve their competitiveness through quality standard certifications,” said Juan Luis Fernandez, IDEP’s executive director.

Tucumán is noted for its privileged ecological conditions, as the climate, soil and subtropical temperature with a marked dry season are ideal for lemon farming. With a harvest season from April to sober, Tucumán accounts for 85% of the lemons produced in the country and provides around 40,000 jobs. A brief review of the past few years shows a steady increase in production, going from 602,015 tons per year in 1995 to 1,328,300 tons in 2007, when the volume stabilised and remained relatively stable… until now. On average, until 2013 the records showed around 35,000 hectares planted with lemon, of which 198,396 tons of fresh fruit went to export and 50,000 tons goes to the domestic market of fresh fruit and 1,050,000 tons is ground. The effects of the frost that affected the region in 2013 are now being seen in 2014, as this season the fruit deficit is estimated in alarming figures ranging from 30% to even 50% less, depending on the area. In figures for 2014, the experts forecast that there will be around 500,000 t destined for industrial purposes and only 170,000 tons of fresh lemon.
This will be a tough campaign and Argentine producers are gearing up to face a season with little fruit and high prices. The main problem is how the international markets will receive the news. In Argentina, if efficient prices are reached more fruits are exported. But if there is no agreement on price negotiations, growers in Argentina prefer to send their fruit to the domestic market where the industry uses it to make dehydrated peel, juices and essential oils.

IDEP Tucumán opening new markets
With a clear focus on opening up new markets, IDEP (Productive Development Institute of Tucuman) is undertaking an intense joint project between the public and private sectors. New fields are being added to those already in production and our duty now is to find new target destinations for this surplus”, explains Ms. Virginia Avila, Area Export Promotion Coordinator for IDEP Tucumán.
The Tucuman export map is expanding and alongside traditional destinations like the USA, Europe and Russia, other new development poles are emerging in areas such as the Middle East or the Asian and African markets.
“Each place has its peculiarities, both in logistics and quality. So, Tucuman’s exporting companies are working hard to swiftly satisfy these market demands.
Despite the distance separating Tucuman and the world markets, the province – by working jointly with the public and private sectors – has managed to position its wide range of produce covering sectors like fresh fruits, organics, frozen items, industrial derivatives, metalworking, software, beverages and food products, etc.. The region has a worldwide presence, with a broad variety of products and destinations, shipping over 150 export products to more than 150 countries.
In this scenario, the IDEP as meeting point between the private sector and the state furnishes the export channel with tools through different initiatives and activities: – Trade Promotion: business rounds, financial assistance or participation in national and international fairs. Competitive edge: quality programme and credit support. Communication: communication support to enhance the visibility of Tucuman companies. Tucumán Brand: as quality seal for products of Tucuman origin.*
The province also has an airport cargo terminal with a cold chamber which allows, for example, exports of berries harvested the same day.
“Production supply in the province under the Tucumán Brand is promoted by the IDEP through participation in trade fairs and national and international missions”, affirms Ávila.

Category: Uncategorized
Tags: Citrus, Tucuman
We use cookies on our website to give you the most relevant experience by remembering your preferences and repeat visits. By clicking “Accept All”, you consent to the use of ALL the cookies. However, you may visit "Cookie Settings" to provide a controlled consent.
Cookie SettingsAccept All
Manage consent