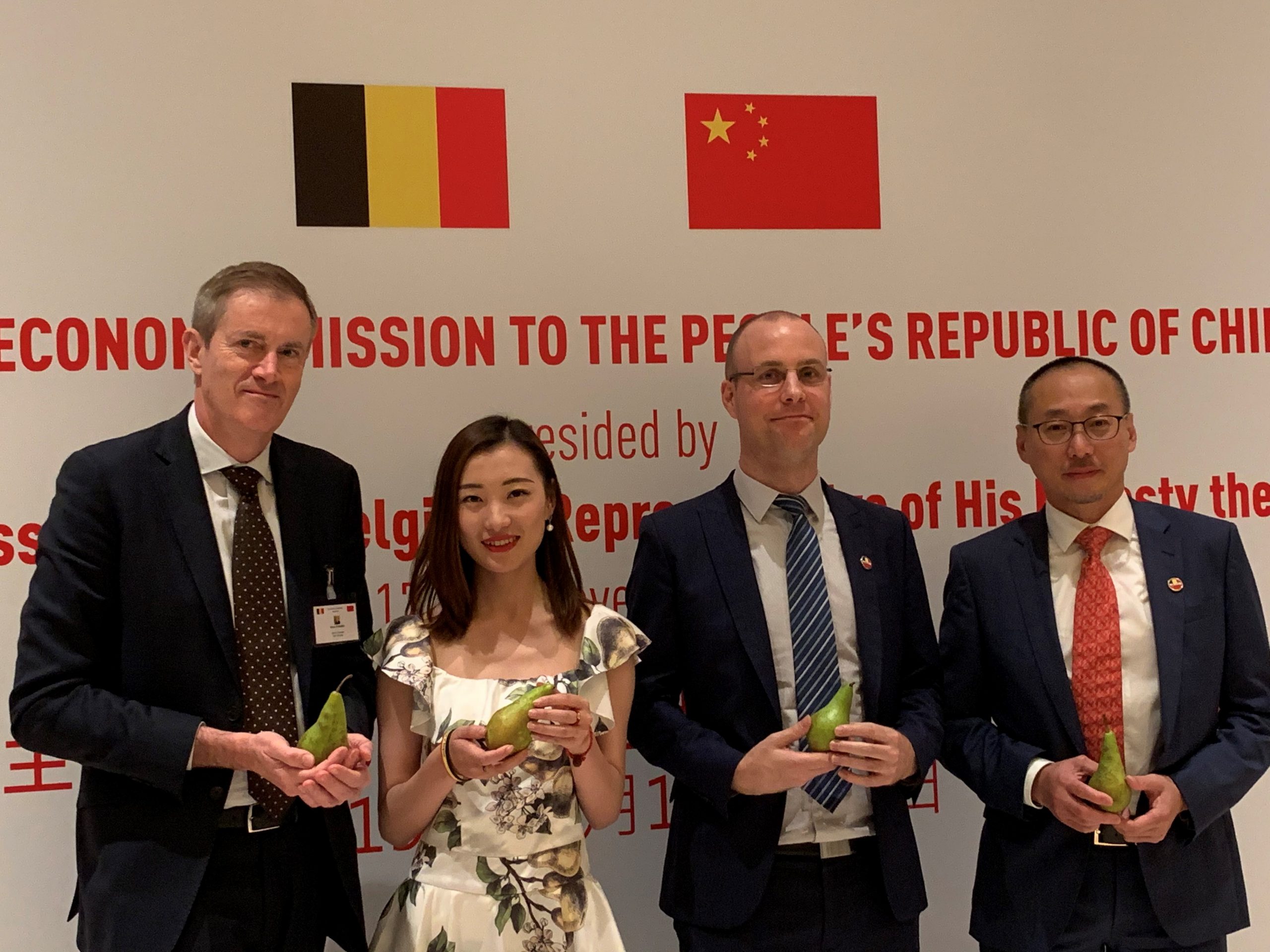 On January 22nd, 2011 BFV and Dole China held a joint official opening ceremony in Shanghai to receive the very first container of Truval Conference Pears – the very first western pear to be officially imported to China, after years of negotiation between the two countries. To celebrate this landmark occasion both Dole China and BFV will launch 2021 as the official 10 year anniversary year of this historic partnership, and at the same time celebrate 50 years of diplomatic relations between Belgium and China.

Since that moment, 10 years ago the BFV-Dole partnership has gone from strength to strength, as Europe’s number one pear has gradually captured the hearts of Chinese consumers all over the country. Even with other pear varieties having become available in the years since, Truval Conference Pears is recognized by both Chinese consumers and industry experts alike as the number one western pear reference in the Chinese market.

This partnership of Dole China, one of the leading fruit importers and distributors in China, with BFV, one of Europe’s biggest grower co-operatives and biggest supplier of Conference Pears in the world, has proven to be a match made in heaven as it was able to plan, market and promote the Conference Pears gradually in all major markets and regions across the country. This strategic approach has proven key in educating consumers and professionals with the unique smooth taste of the Conference Pear variety and in managing to exponentially increase its year-on-year sales volume this past decade. In this aspect Dole and Truval’s efforts did not go unrecognized as they were awarded with the Marketing Campaign of the Year at Asia Fruit Logistica in 2017, noting both BFV and Dole’s efforts in the past decade in running a highly structured and consistent campaign in China to educate professionals and consumers about Conference pears, demonstrating how to best organize logistics, store, handle, taste and enjoy the fruit.

Mr. Terry Chan, General Manager of Dole China reflects as follows on the historic past decade; “I believe this 10-year journey is just a beginning for both of us. With the joint efforts and cooperation from strength to strength, we will cheer for the next brilliant decade soon.“

Mr. Marc Evrard, Commercial Director at BFV looks on both the past and the future: “This achievement is clearly a testament to the faith, persistence, commitment and teamwork for all involved in the BFV & Dole China partnership, without whom introducing a new product in a new market would not have been possible. At the same time we look forward to celebrating many more such milestones together in the years and decades to come.”

To celebrate the momentous occasion of both the 10 year anniversary and 50 years diplomatic relations between their two countries, BFV and Dole will host a wide range of events and marketing initiatives to both trade and consumers. In addition, a brand new Truval Conference Pear gift box was launched last month to key retailers highlighting Belgium’s and China’s unique cultural bond to wide acclaim of the sector. The near future also holds other exciting prospects for the BFV-Dole partnership as not only will they further market other varieties such as Sweet Sensation, but preparations are in the works for the launch of the exclusive Red Conference Pear varieties

Category: Uncategorized
Tags: 10 year anniversary, BFV, China, Dole China, pears, Truval Conference Pears
We use cookies on our website to give you the most relevant experience by remembering your preferences and repeat visits. By clicking “Accept All”, you consent to the use of ALL the cookies. However, you may visit "Cookie Settings" to provide a controlled consent.
Cookie SettingsAccept All
Manage consent