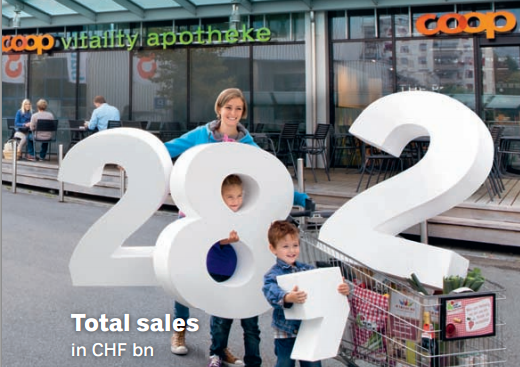 Despite a difficult environment, total sales for the internationally active retailer and wholesaler last year inched up 1.4% on 2013. And this year it aims to repeat the feat.

“The supermarkets will focus mainly on sustainability and variety in 2015, when the Coop Group again aims to achieve above-average growth through the online formats Coop@home, Microspot.ch and Nettoshop.ch and the numerous other online shops,” the Basel-based group said in its 2014 annual report, published February 17.

“The Coop Group also aims to more closely combine bricks-and-mortar and online trading through cross-channel solutions.”
“Sustainability, variety, quality and pricing performance continue to be the attributes by which it positions itself,” it said.

The report shows the group – which claims to have the densest network of sales outlets in Switzerland – ran about 1970 retail outlets (supermarkets and specialist retail formats) and 199 in wholesale last year.

Coop described its online business as a strong growth market, one in which its net sales exceeded one billion francs for the first time last year. “Online shops in the retail sector lifted sales 52.4%, while online sales in the wholesale business grew 10.4%,” it said.

The group’s wholesale operations are conducted through the Transgourmet Group, while the Bell Group and the Coop manufacturing companies comprise its manufacturing operations.

“In the wholesale/production segment, the potential for further growth lies in integrating activities across Europe. Political developments in Russia, including the weakness of the rouble, and the difficult economic trend in Romania pose a challenge.

The group’s retail business spans the Coop Cooperative with its supermarkets and specialist formats, plus subsidiaries.

In 2014, growth In the retail segment was driven especially by the Interdiscount and Microspot.ch formats as well as by the 2014 acquirees Marché Restaurants Schweiz AG and RS Vertriebs AG with the Nettoshop.ch und Schubiger sales brands. 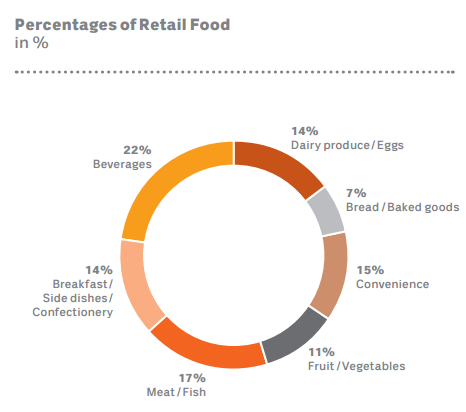 In 2014, Coop expanded its selection of regional and local products – now sold under its new Miini Region quality seal – and numerous sustainability ranges were extended, for instance the own-label sustainability brand Ünique.

Ünique – Comprising high quality carrots, a vegetable mix and now also cucumbers, Ünique has been marketed in Coop supermarkets since 2014 as an own-label sustainability brand, underpinning Coop’s view “that entire harvests should be utilized and not just parts of them.”

Pro Specie Rara – Parsnips were extremely popular among the vegetables in this line sold by Coop last year. Since 1999 it has been working with the Pro Specie Rara Foundation to maintain the biodiversity of Swiss farming.

Swiss no. 1 in organic

Since 2008, Coop has worked closely with the Hochstamm Suisse association, which is dedicated to maintaining and fostering standard fruit-tree orchards in Switzerland. These comprise a wide range of fruit varieties and provide habitats for endangered animals. Coop currently stocks around 40 products made entirely from Swiss Hochstamm fruit, including apple and pear juices.

The Betty Bossi brand of fresh convenience foods – which Coop said is Switzerland’s most successful such range – is sold exclusively by it. In 2014, Coop launched around 150 new Betty Bossi products, for the first time including items to consume warm while “on the go”. In autumn, the “let’s cook” line was launched, comprising pre-prepared vegetables, ready-made sauces and pre-cooked side dishes, making “healthy home cooking easy and without any need to chop and peel.” Coop generated sales of 470 million francs with Betty Bossi products in 2014, up 2.2% on 2013.

Fruit and vegetables with particularly intense flavour are chosen for the Coop own brand Primagusto, which now comprises 42 seasonal products. In 2014, it posted sales of 21 million francs and growth of 26.9%.

Among Coop’s manufacturing companies is Banana Ripening Plant Services, with activities including the sourcing, ripening and packaging of bananas and exotic fruit.

Last year it stored and order-picked six banana and three pineapple varieties, in addition to mango, avocado and 42 varieties of dried fruit and nuts, delivering a total of 22,870 tons of bananas, 1,569 tons of dried fruit and 4,256 tons of exotic fruit (pineapples, mangoes, avocados).

The share of bananas bearing the Fairtrade Max Havelaar quality label in the overall banana range rose to nearly 90% and the Banana Ripening Plant increased the share of organic items in its total output to nearly 35% in 2014. 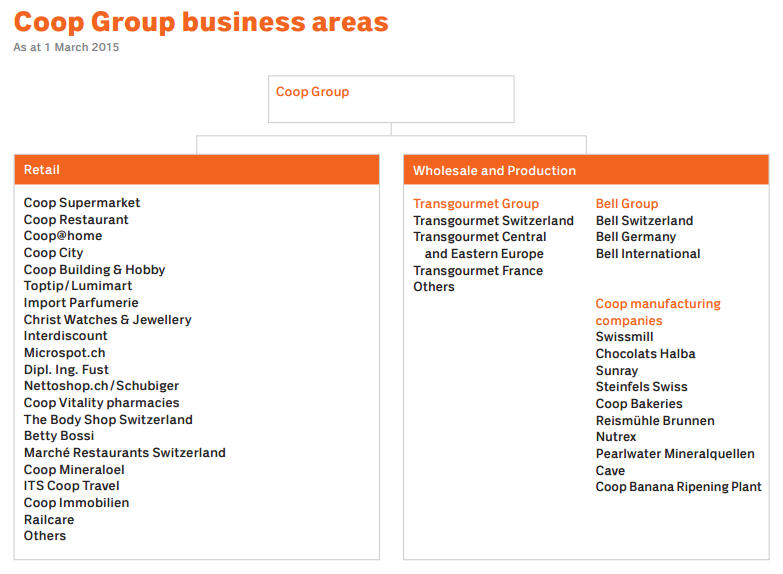 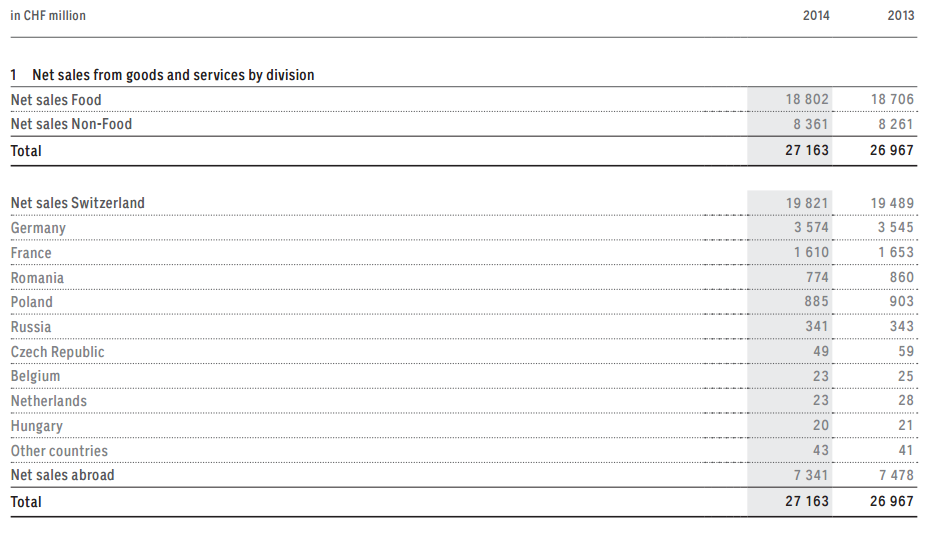 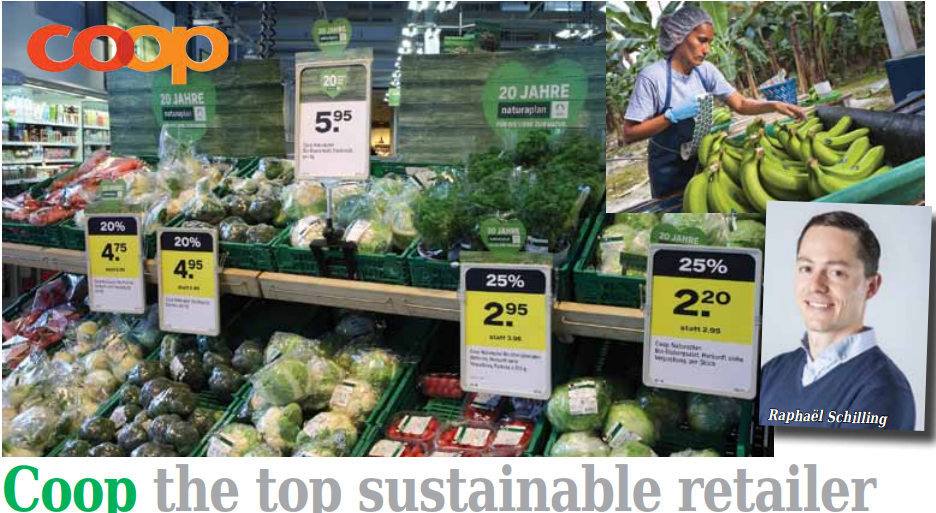 Coop is the second biggest Swiss food retailer, with 35% of the market. It currently has 1,933 retail supermarkets in Switzerland and posted net sales of €14.9 billion in 2013, up by 1.7% on the previous year despite several waves of price cutting.

For fruit and vegetables, the group has identified four main sources of sustainability-related risk: working conditions at source, energy and CO2, water use, and pesticides.

On working conditions, Coop’s strategy for produce from developing countries is to expand FairTrade certification. Already 95% of its bananas and a large proportion of its avocados, pineapples and mangoes are FairTrade certified and the process is under way for papayas.

To reduce its energy consumption and carbon footprint, Coop gives preference to regional, national and European products, in that order. It also limits the use of air freight as much as possible. For instance, white asparagus used to be imported from Peru by air and now travels by sea.

Category: Uncategorized
Tags: Retail, Sustainability, Switzerland
We use cookies on our website to give you the most relevant experience by remembering your preferences and repeat visits. By clicking “Accept All”, you consent to the use of ALL the cookies. However, you may visit "Cookie Settings" to provide a controlled consent.
Cookie SettingsAccept All
Manage consent