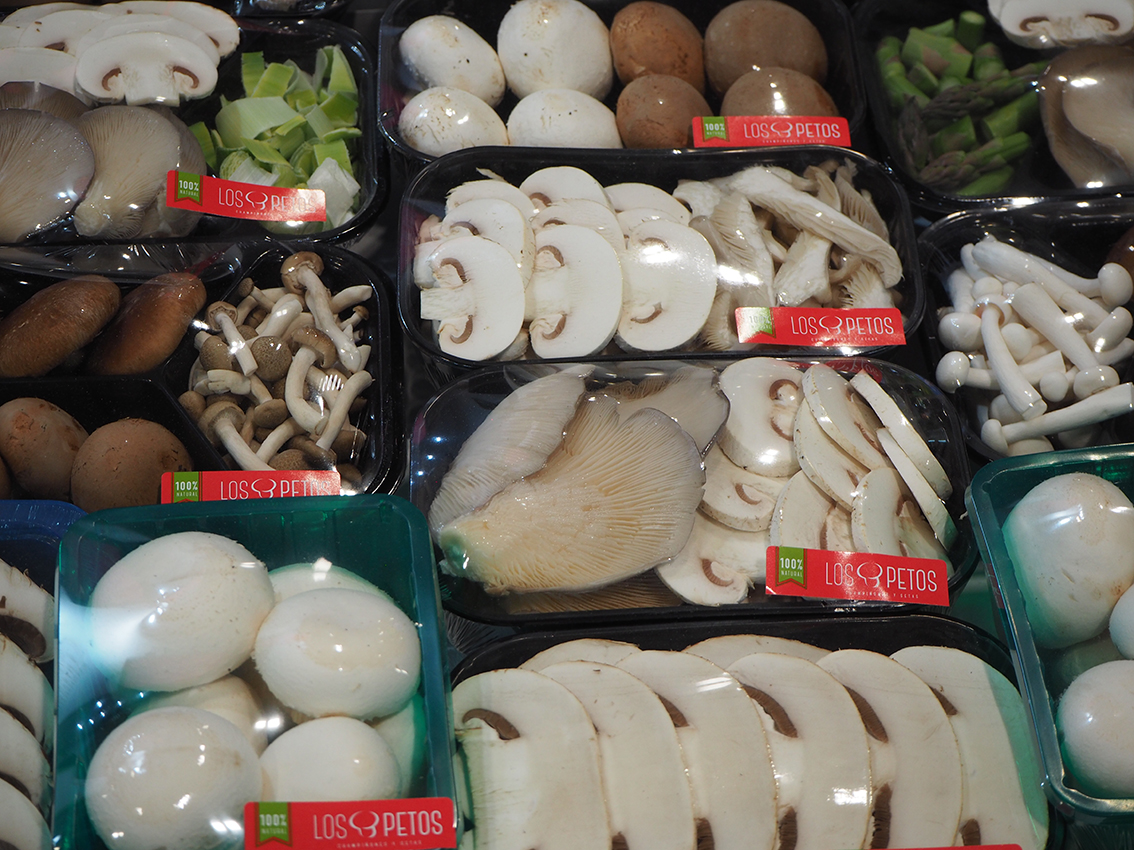 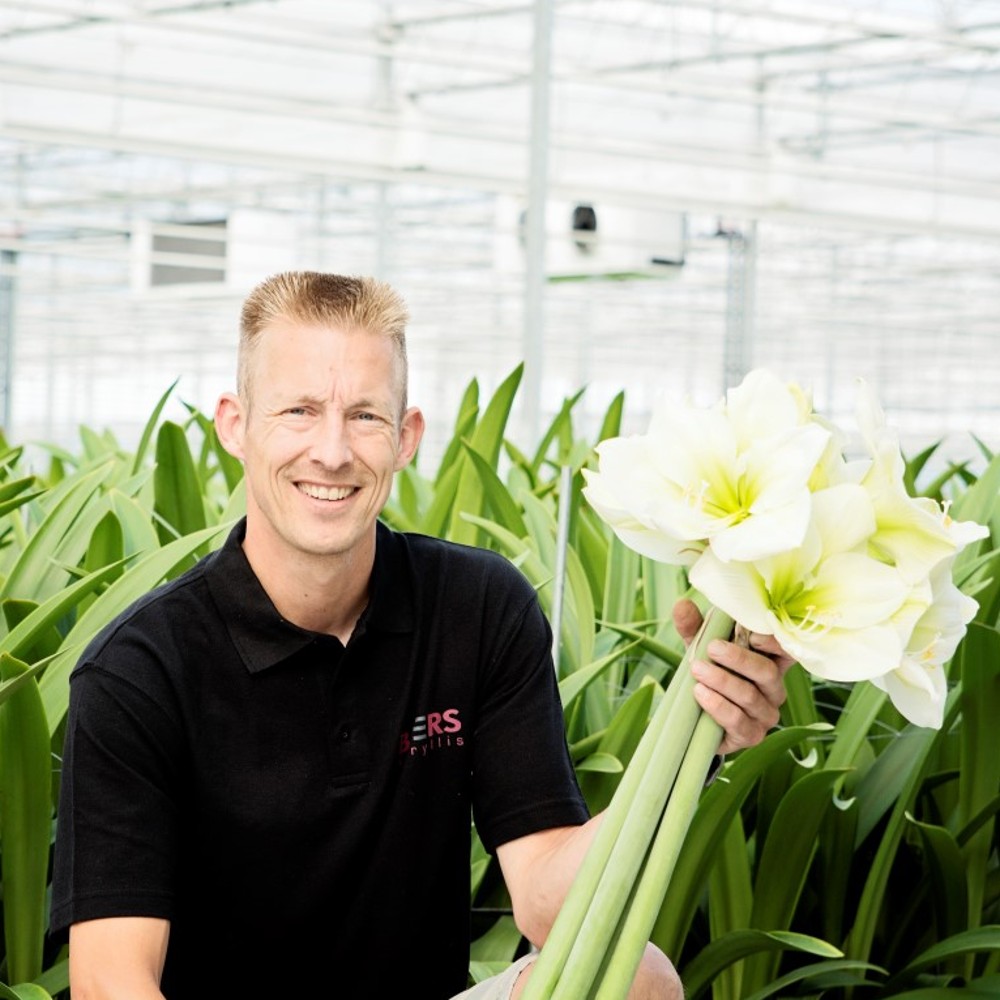 Amaryllis grower Erik Boers wants to keep his crop healthy, preferably using biological crop protection. This year he made a single introduction of predatory mites to control thrips and then developed the population using Nutrimite™. He is enthusiastic about the initial results. Meanwhile the mice, which loved the bran component of his previous control strategy, have been outmanoeuvred.

At Erik Boers’ company, thrips are a regular uninvited guest. Erik grows both amaryllis bulbs and flowers on 6.5 hectares. The bulbs, which are grown in open soil, are sold for dry sales while the flowers, cultivated on clay pellets, are marketed during the winter season.

Erik is a member of the Decorum grower cooperative, which sells a fully sustainable range of flowers and plants. With all members Global- or MPS-Gap-certified at the minimum, biological crop protection fits well with the cooperative’s profile.

Fighting disease in Amaryllis is not simple. After the flowers are harvested, the leaves appear. However, the leaf buds are initially so tightly closed that it is difficult to effectively spray them, let alone comprehensively scout for pests and beneficial insects.

“These challenges are further compounded by the fact the crop remains in the ground for three years,” explains Erik. “After harvesting the soil is steamed, parcel by parcel, so we are never able to clean the greenhouse completely – or apply optimum hygiene measures.”

Working with a Biobest competitor, three years ago Erik’s first attempted to control thrips using Amblyseius swirskii and introduced cultivation sachets several times. The sachets were filled with predatory mites, bran and factitious prey. “What we hadn’t counted on were the mice,” says Erik. “During the summer months they were attracted by the smell of the bran – I even saw them running around with sachets in their mouths! It was not a satisfactory solution, to say the least.”

This year Eric decided to try a different biological pest control strategy in a newly replanted section of the glasshouse. He chose the Biobest strategy – featuring a combination of Swirskii-Breeding-System and Nutrimite™ – a system avoiding the need to continually reintroduce sachets. Crop Protection Specialist, Marvin Koot, advised Eric to introduce Swirskii-Breeding-System just once in early spring to develop a population of predatory mites for the entire cultivation year.

“Immediately after the flower harvest, there were insufficient thrips in the greenhouse to sustain the predatory mites,” says Marvin. “It was therefore necessary to provide the mites with sufficient food to sustain them. Our feed supplement Nutrimite™, based on specially selected pollen, has proved ideal.”

Since introducing the predatory mites, every fourteen days the team has manually blown in the pollen. “You can barely see it, but it does work,” says Erik. “In fact, it worked exceptionally well.”

Later on during the growing period, just to be sure, he introduced some loose predatory mites in one variety. While occasionally he still sees a few thrips, the pest is now well under control. “When it comes to thrips control, this ‘test’ has been a success,” says Erik. “Although it would be helpful to automate the dispersion process to simplify application.”

Prior to flowering, the crop is cooled and the leaves removed. At this point, both the thrips and predatory mites disappear. In theory, the predatory mites could survive this period, as they can tolerate temperatures as low as 13°C. However, before the start of flowering, growers traditionally spray against other pests which means new predatory mites need to be introduced in spring.

“As things stand, you can’t rely solely on biological crop protection,” explains Erik. “You have to occasionally take action against mealybug, narcissus mite, cicadas and caterpillars – however, we are tending more and more to go biological.”

Erik is also pleased with the advice he receives from Biobest with Marvin paying regular visits every fourteen days to discuss and adjust the strategy as necessary.

“We are seeing growing interest in this strategy,” says Marvin. “This year we have added several new customers growing Amaryllis.” 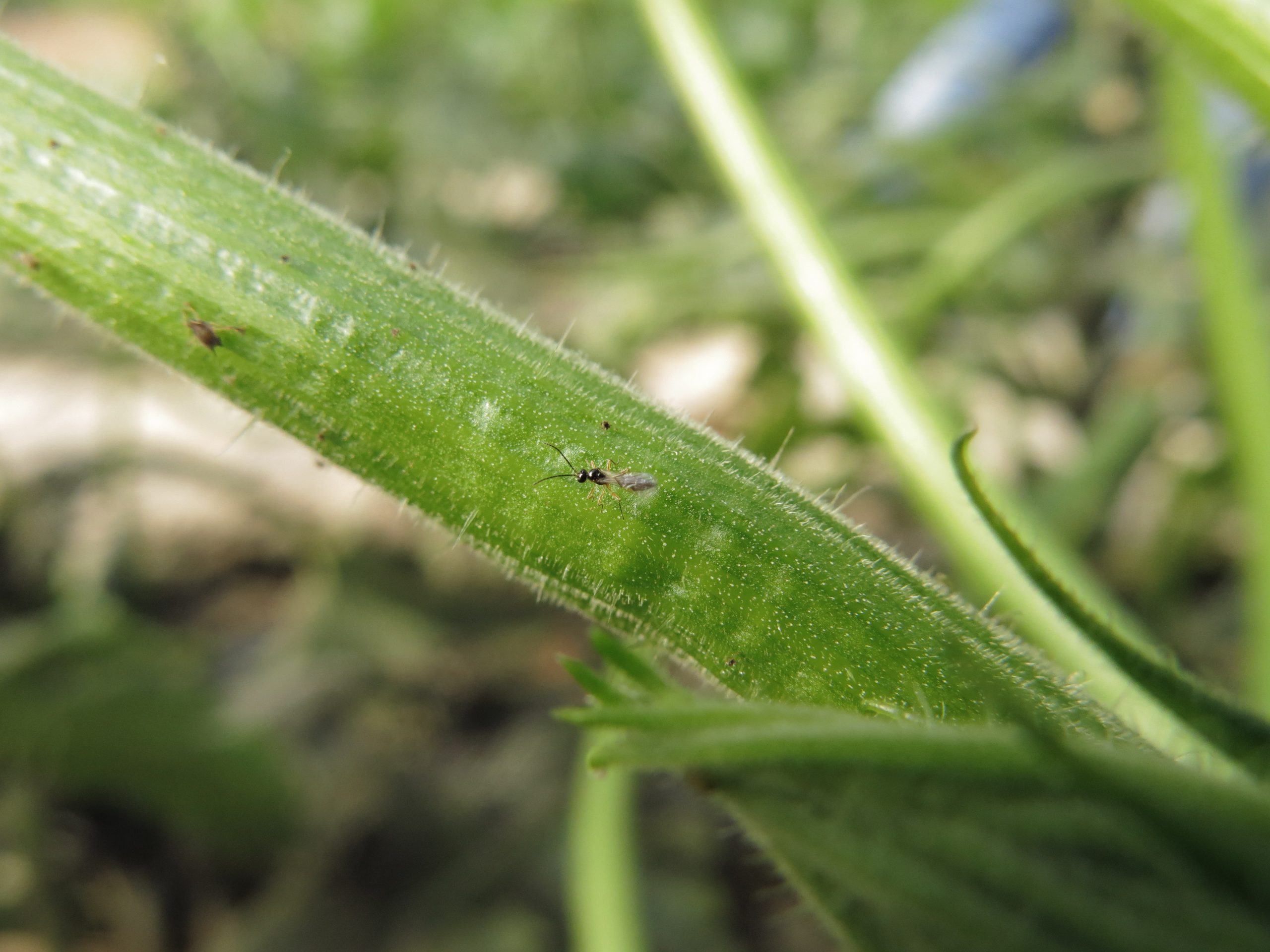 Whether they are used in a preventive or a curative approach, parasitic wasps and gall midges are the cornerstone of a reliable aphid control strategy. For cucumber and gherkin growers, now is the time to act, advises Biobest.

Due to the nice weather, spring has awakened rapidly this year. It is also time of the season for aphids, which are now starting to invade greenhouses in Western Europe, it said in a press release.

For cucumber growers, aphids are among the most problematic pests. With a new cultivation period starting soon, Biobest strongly advises taking action now.

Biological control of aphids rests mostly on the introduction of parasitic wasps and gall midges. The female insects look actively for aphid hot spots to lay their eggs. When these eggs hatch, the larvae devour the aphids, it said.

How can growers know which beneficial they should introduce and when? “It depends on whether the grower knows exactly which species are present in his crops,” said Wesley Akkermans, sustainable crop management specialist at Biobest.

“If he has only spotted small aphids, like the green peach aphid (Myzus persicae) and the cotton aphid (Aphis gossypii), he can rely on two parasitic wasps as part of a curative strategy: Aphidius colemani, complemented with Aphidius matricariae. However small, these aphid species are notorious for their rapid distribution.”

For bigger species, like the glasshouse potato aphid (Aulacorthum solani) and the potato aphid (Macrosiphum euphorbiae), Akkermans advises the use of Aphidius ervi and Aphelinus abdominalis. “The parasitic wasps are always introduced as mummies. These need to be put on damp, shady spots between the crops to guarantee the best result, preferably close to an aphid hot spot”

If growers don’t know which aphid species are present, or if they want to maintain a thorough preventive strategy, they can opt for Biobest’s Aphi-Mix-System. This is a mixture of the four above-mentioned Aphidius species in the same package.

Last but not least, the parasitic gall midge Aphidoletes aphidimyza is a strong complementary weapon against aphids. In contrast to the parasitic wasps, the gall midge isn’t very choosy regarding its diet. “Its progeny eats literally every aphid species,” Akkermans said. “Moreover, thanks to the large cucumber leaves, the larvae have an excellent mobility. Only a few larvae per leaf is already enough to destroy a complete aphid population.”

Because of this complementarity Akkermans strongly recommends to apply the gall midges in combination with the parasitic wasps.

Category: Uncategorized
Tags: Aphi-Mix-System, aphid control, Biobest, cucumbers, gall midges, gherkin, parasitic wasps, sustainable crop management, Wesley Akkermans
We use cookies on our website to give you the most relevant experience by remembering your preferences and repeat visits. By clicking “Accept All”, you consent to the use of ALL the cookies. However, you may visit "Cookie Settings" to provide a controlled consent.
Cookie SettingsAccept All
Manage consent