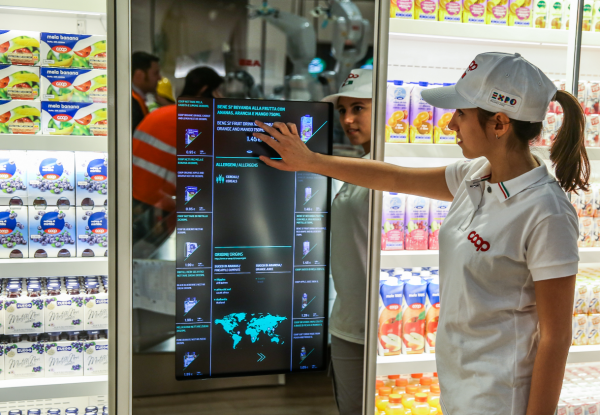 Coop Italia, Italy’s biggest grocery cooperative, is using futuristic technology to bring back some of the advantages of traditional markets, where it was easy to ask shopkeepers about their wares.

“Motion sensors detect which product a shopper is pointing or looking at, triggering visual displays of information such as ingredients, potential allergens, the origin or processing of the food, its carbon footprint, and even wine pairing recommendations. “That’s exactly the sort of detail that consumers now see as a fundamental pillar of their shopping experience – especially millennials who grew up with the Internet at their fingertips,” Ray says.

She quotes Coop Italia’s chief information officer Gabriele Tubertini as saying that customers now want access to everything there is to know about the products they are interested in. “Take an apple, for example. They want to know what type of tree it grew on, the CO2 it produced, the chemical treatments it received, and what its journey was to the supermarket shelf.”

Read the full post here: The supermarket of the future: Designing for humans

Category: Uncategorized
Tags: Coop Italia, COOP Italy, Gabriele Tubertini, Microsoft, Retail, supermarket of the future, Susanna Ray, Technology
We use cookies on our website to give you the most relevant experience by remembering your preferences and repeat visits. By clicking “Accept All”, you consent to the use of ALL the cookies. However, you may visit "Cookie Settings" to provide a controlled consent.
Cookie SettingsAccept All
Manage consent