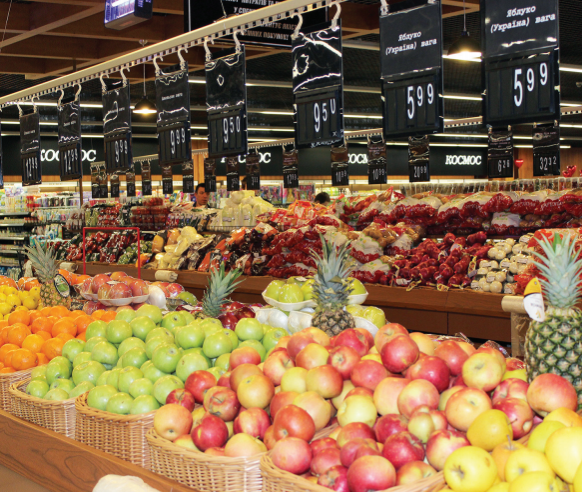 Founded in 1992 in Odessa (southern Ukraine), Tavria V started out selling food in kiosks but in 1998 opened its first supermarkets.

“Tavria V is a multi-format retailer,” said Elena Seyrik, director of its import department. “We operate via 70 stores: hypermarkets, supermarkets, convenience stores and delicatessen supermarkets. Our shops are located in central and southern Ukraine.”

In addition, Tavria V was the first retailer in the region to begin e-commerce, opening its internet shop under the same brand.

“Sales of fresh produce, and fruit and vegetables in particular, are very significant for us,” said Natalia Muzyka, the company’s import manager.

“We import fruit from Greece, Spain, Egypt and Turkey, mainly citrus and stone fruit. The vegetables are imported from Turkey, Poland, and Egypt. Nonetheless, domestic fruit and especially vegetables account for a considerable part of our trade, especially in summer and autumn.

“Ukrainian producers keep improving the quality of their products, expanding their assortment and building modern cold stores so they can extend the seasons’ supplies of local fruit, berries and vegetables.”

To offer better quality and better prices, Tavria V has direct contracts with both Ukrainian and foreign producers.

“Our company keeps growing; we not only have shops, but also two restaurants and a chain of Sprint cafés, so we are open to new contacts,” Seyrik said.

Category: Uncategorized
Tags: e-retail, ED146, Elena Seyrik, Natalia Muzyka, Retail, Tavria V, Ukraine
We use cookies on our website to give you the most relevant experience by remembering your preferences and repeat visits. By clicking “Accept All”, you consent to the use of ALL the cookies. However, you may visit "Cookie Settings" to provide a controlled consent.
Cookie SettingsAccept All
Manage consent