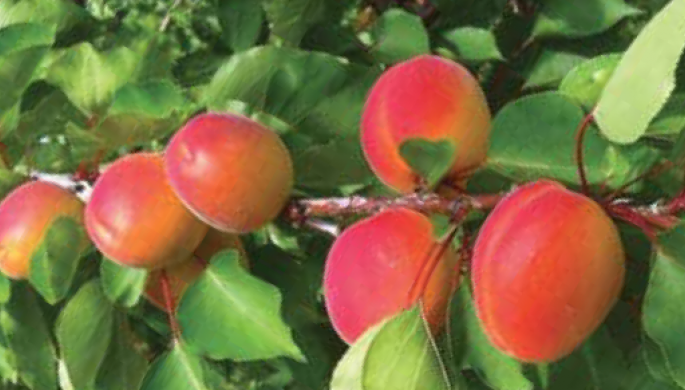 This low chill apricot, which only requires around 250 chilling hours, offers great quality for a very early variety, including its beautiful presentation (pinkish orange), harvesting from 7 April (with pre-flowering treatment) or 25 April (without treatment) and a skin that resists periods of heavy rain without the fruit cracking.

“Maya Cot is also recognised in France and Spain as one of the best in the early slot because of its good eating quality, with a sugar content of 12° Brix,” said Marie-Laure Etève-Lambertin.

In France, Lady Cot is still the most-planted COT variety for the main or even medium-late season (harvesting in Bergeron from the end of June), with yields of up to 40 tons/ha.

Cot International has also launched its first 100% deep red variety, Rouge Cot, which has been being planted since last winter. Harvested in mid-June and self-fertile, it has orange flesh, a very even colour, even for fruit picked from the middle of the tree, and a good uniform size (between 2A and 3A).

Cot International has also begun to respond to demand in the ‘long-life’ segment, as Lady Cot, Sunny Cot and Rouge Cot have all shown they have a long storage life (over three weeks), so are suitable for imports by sea from the southern hemisphere and for exporting overseas. Cot International offers over 17 apricot varieties, covering all the market segments. Its new offerings come from its own hybridisation programmes.

Wonder Cot, Magic Cot and Lady Cot are the most planted varieties. Cot International is developing a worldwide network of partners to represent its cultivars.

“Our varieties are planted in most European countries, like Germany, Hungary, England, Bulgaria, Greece and Turkey, our major market shares are in Italy, Spain and France,” said Etève-Lambertin.

The French company also represents American breeders of plum and cherry varieties in Europe and the Mediterranean countries. Grenadine, its purple Japanese-American plum variety, is attracting more and more interest in the South West of France, in Italy and in Morocco.

Category: Uncategorized
Tags: apricots, Cot International, early apricots, MarieLaure Etève-Lambertin., Maya Cot, Stone Fruit
We use cookies on our website to give you the most relevant experience by remembering your preferences and repeat visits. By clicking “Accept All”, you consent to the use of ALL the cookies. However, you may visit "Cookie Settings" to provide a controlled consent.
Cookie SettingsAccept All
Manage consent