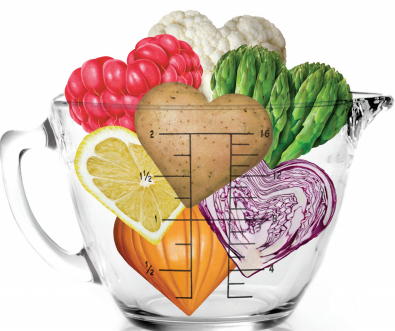 “I love 5 to 10 servings a day” is the tagline for a campaign now running province-wide in Quebec, Canada, to remind consumers about the importance of eating more fruit and vegetables.

First launched in 2004 by the Quebec Produce Marketing Association (QPMA), the “I love 5 to 10 servings a day” campaign has been given a fresh look and will run from May 2 through June 5.

The campaign features four new visuals that include the well-known heart figures, plus a new slogan: “Mettez-y du coeur!” (Put your heart into it!).

The aim remains simple and straightforward: to remind consumers how important it is to eat fruits and vegetables, and also how easy it is to make them part of daily life in all sorts of ways, including recipes, smoothies, snacks, and preserves, the QPMA said.

“Besides being tasty and good for our health, fruits and vegetables have the advantage of being extremely versatile. You can snack on them any time of day, in almost any form you like. As I’ve often said before, fresh or frozen, raw or cooked, in soups or salads, practically any way is the right way to eat 5 to 10 servings a day,” said nutritionist Julie DesGroseilliers, the campaign’s official spokesperson.

The new campaign will appear on numerous billboards in Montreal, Quebec City, Trois-Rivières, and Sherbrooke, and on many websites as well, including lapresse.ca, tou.tv, ricardocuisine.com, telequebec.tv. Its social media visibility will also be supported with Facebook ads.

Category: Uncategorized
Tags: campaigns, I love 5 to 10 servings a day, marketing, promotion, QPMA, Quebec
We use cookies on our website to give you the most relevant experience by remembering your preferences and repeat visits. By clicking “Accept All”, you consent to the use of ALL the cookies. However, you may visit "Cookie Settings" to provide a controlled consent.
Cookie SettingsAccept All
Manage consent