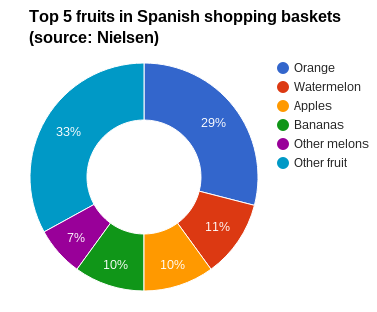 The recovery in prices and good weather have been a boon for retail sales of fruit in Spain, which in the first nine months of 2015 were up 10.2% on the same period last year.

Del Castillo singled out the avocado for special attention, noting sales growth of 43.9%, “possibly helped by its status as a ‘superfood’.” Also undergoing strong growth were courgettes and artichokes, which both increased their sales by more than 20%, with broccoli not far behind (+19.9%).

But it’s the classics. such as oranges and potatoes, which are still the most common in Spanish shopping baskets, she said.

Fruit and vegetables are also gaining ground in online sales, with growth of 26.3% in sales of this produce online, compared to 8.7% for sales in physical stores.

Interestingly, it’s not just the sale of heavy produce, such as oranges and potatoes, that were popular in online sales, but also ready-to-serve and seasonal produce items. Del Castillo said sales of the latter were helped by online promotions. 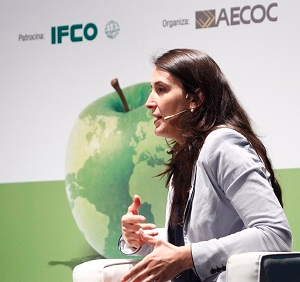 Is there scope to increase retail sales of fruit and vegetables in post-recession Spain? At the AECOC Fruit and Vegetable Congress in Valencia in June, Nielsen’s retail services account manager, Gema del Castillo, shared insights into today’s Spanish consumer and where opportunities for growth lie.

Del Castillo started by looking at whether the market is on the road to recovery. Effectively, European consumer confidence continues to improve, she said, but it is yet to return to pre-crisis levels, namely before the big recession hit Europe (in about 2008). Nielsen data shows that In Spain, consumer confidence has reached levels not seen since 2010. There was 3% growth in the Spanish GDP in the first quarter of 2015, while the CPI fell 0.7%.

Other indicators, such as an increase in employment, car registrations, sales of electrical appliances and electricity consumption also augur well for believing that a recovery has started. The hospitality business, for instance, has stabilised, with beverage sales showing growth since 2013 and for the first time in six years the number of establishments has started to increase again. But Del Castillo warned this is a bit of a wobbly start to recovery that is accompanied by uncertainty.

Nielsen’s analysis shows that despite a decline in Spain’s population last year, demand strengthened, though with the downside of a drop in retail prices. Compared to 2013, the value of retail sales last year fell 0.4% and prices 1.1% but the volume was up 0.7%. For fresh produce specifically, sales were 1.2% and prices 1.8% lower as the volume rose 0.6%. But compared to last year, retail sales to this April were up 0.7% in value and 1.1% in volume and prices up 0.4%, with the respective changes for fresh produce being +0.3%, +1.2% and -0.9%. Thus overall the context is one of improved demand and a slowing of the drop in prices.

Key components of the fast-moving consumer goods industry during the first quarter of this year were:

On the latter, Del Castillo highlighted that, according to Shoppertrends 2015:

The last figure shows that while there’s been a deflation of prices, many households have not perceived it, she said.

Trends in fruit and vegetables sales

Last year, fruit and vegetables accounted for 11% of Spanish consumers’ shopping spend, up from 10% in 2011.

Sales in the main categories have grown in volume thanks to lower prices. For fruit, it is oranges that are the winners, representing about 27% of the total fruit volume sold in the 12 months to April this year in Spain. Add mandarin sales (7% of the total), and citrus fruit accounts for one in every three fruits sold. Apples (11%) and bananas (10%) were next hottest in demand.

As for vegetables, potatoes formed 29% of the volume sold over the same period and tomatoes 16% and together they account for nearly one in every 2kg of vegetables bought, but just 31% of the total vegetable spend. Next highest in volume came onions (9%) and peppers (5%).

Nielsen’s household panel data shows fresh produce is accounting for an increasing share of the value among all shopping missions, but particularly in the case of routine ones, which are those involving the biggest spend. It is also increasing across all retail channels, but above all in supermarkets and superstores. The latter are gaining ground, moving from 51% in 2008 to 58% in 2014 in terms of fresh produce sales, compared to 49% to 42% for traditional and specialist grocers.

Del Castillo said that as growth opportunities, two areas that have already seen major gains outside Spain are the online and convenience channels.

“The online channel is growing at a much faster rate than offline,” she said, displaying figures showing the value of online fresh produce sales value grew 14.7% for the 12 months to April 2015 while offline sales rose just 2.2%.

Fresh produce accounts for a smaller share of the online shopping basket – for fruit it’s 17% for offline and 9% online –  however there are big opportunities for staples such as potatoes.

The key to increasing online sales is to “earn trust through reliability“, Del Castillo advised, and ways to do this include offering customers a refund if they’re not happy with the produce delivered. In her own experience, Del Castillo said the melon delivered to her by online suppliers is usually much tastier than what she picks herself in person.

“More and more shoppers are buying fresh products online despite retailers being sceptical about the potential of this channel for them. The consumer is definitely ready to do part of their fresh product shopping online, all that is lacking is the retailers’ investment to sell these products online properly,” she said.

The convenience channel, which includes a broad range of outlets including petrol stations, fitness centres and airport and train station shops, is also very promising. Sales of convenience products, such as pre-cut and prepared fruit, salad and vegetables in the UK’s leading supermarkets, are worth €1.7 billion a year, according to Nielsen Scantrack Grocery Multiples data.

Category: Uncategorized
Tags: e-commerce, fruit and vegetable demand, Gema del Castillo, JB, Nielsen, Retail, Spain
We use cookies on our website to give you the most relevant experience by remembering your preferences and repeat visits. By clicking “Accept All”, you consent to the use of ALL the cookies. However, you may visit "Cookie Settings" to provide a controlled consent.
Cookie SettingsAccept All
Manage consent