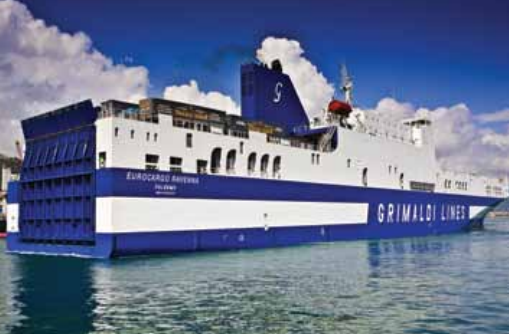 The Grimaldi Group shipping company began 2015 with big news: as of February it launched a new direct maritime service between Civitavecchia and the North American Ports of Baltimore and Halifax for the transport of cars and other rolling cargo. The new link is the first direct and regular service between the Mediterranean and North America for the ro-ro carrier sector.

And in Jamuary, Grimaldi had also strengthened the connection between Savona and Barcelona that has become a daily service thanks to deployment of the M/V Ro/Pax “Florencia” that has been added to the 4 “Eurocargo” units which already serve the line.

In February, Grimaldi Group improved the Brindisi-Greece service thanks to the employment of the M/V Euroferry Olympia and Euroferry Egnazia, able to carry up to 3,200 lm and with a cargo capacity of 200 ro-ro units and 600 passengers. The Ravenna–Greece direct link joined the already operational transhipment connection, thus increasing the number of departures from Ravenna to Igoumenitsa and Patras to 5 a week.

In order to face the big challenges of 2015, Finnlines, the company serving the Baltic market and of the Grimaldi Group, has decided to invest in eco-friendly technologies on which it is spending about €65 million. Grimaldi Group is a leader in the maritime transport of cars and all ro-ro vehicles with one of the biggest fleets in the world of roro/multipurpose vessels and car carriers.

The fleet today consists of more than 100 vessels. The vessels are ro-ro/multipurpose, Pure Car and Truck Carrier, Cruise Ferry and High Speed Ferries. The current maritime connections operated by the group serve more than 120 ports in 47 countries in the Mediterranean, Northern Europe, Western Africa, North and South America.

Category: Uncategorized
Tags: Civitavecchia, Grimaldi Group, Logistics, Mediterranean, Port of Baltimore, Port of Halifax, Ports, Shipping
We use cookies on our website to give you the most relevant experience by remembering your preferences and repeat visits. By clicking “Accept All”, you consent to the use of ALL the cookies. However, you may visit "Cookie Settings" to provide a controlled consent.
Cookie SettingsAccept All
Manage consent