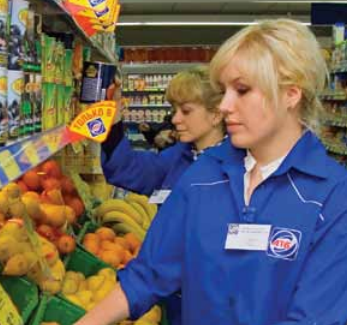 Despite the difficulties, ATB Market maintains its volume of sales at last year’s level.

At the moment, the company imports 50% of its foreign fruit and vegetables directly and buys the rest through Ukrainian importers. “We import a lot from Spain: stone fruit, persimmon, lemons, tomatoes, etc. We are generally satisfied with the quality of Spanish products,” said produce buyer Svetlana Hosalova. The main competitor for Spanish citrus fruit is Turkey. “In season, we order 700-1,000 pallets of citrus fruit from Turkey at least twice a week.”

ATB Corporation carries out several activities, a major one being the development and marketing of the largest discounter retail chain of food supermarkets, ATB Market. The history of ATB began in 1993 with the opening of 6 grocery shops in Dnepropetrovsk (the second largest city in Ukraine and the country’s industrial capital). Since then, the company has seen the highest rate of development in Ukraine, and in April 2015 the number of stores exceeded 750 shops in some 170 cities and towns in 16 regions.

The retailer’s competitive advantage is in its prices, which are 10-15% lower than average, but quality is also an important issue. To offer the best prices and control quality, the company has private label production in various categories. Their assortment now covers more than 600 items.

ATB chains also run a social programme to ensure minimal prices for the main social product groups. Price reduction is part of a longterm programme with the company’s suppliers. Thanks to the effort of the management and staff, the retailer has won numerous prizes in different competitions and is ranked highly in a lot of research work.

To ensure the freshness of its products, ATB Market owns one of the largest logistics infrastructures, including 16 distribution centres and 300 trucks. Daily turnover of the company’s DC exceeds 4,000 t. The company provides jobs for over 31,000 employees and helps most of them improve their professional education and skills.

This article originally appeared on page 20 of issue 137 of Eurofresh Distribution magazine. Click here to read more highlights from that edition.

Category: Uncategorized
Tags: ATB, Retail, Ukraine
We use cookies on our website to give you the most relevant experience by remembering your preferences and repeat visits. By clicking “Accept All”, you consent to the use of ALL the cookies. However, you may visit "Cookie Settings" to provide a controlled consent.
Cookie SettingsAccept All
Manage consent