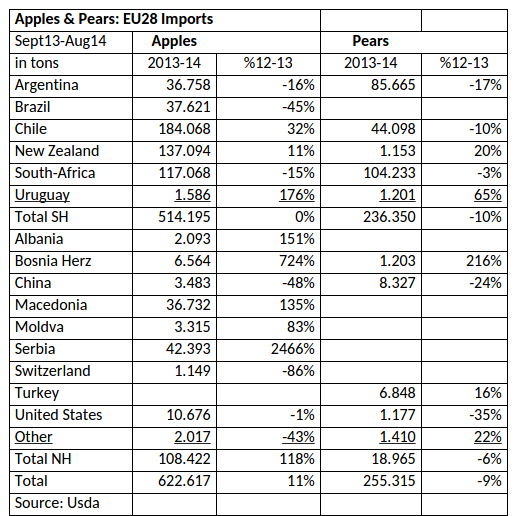 In apple imports there was  major shift in sourcing. Argentina  and South-African volumes were down with 15%, Chile and New Zealand shipped respectively 32% and 11% more.

Argentina exported in 2014 135.000 tons of which 37.000 tons went to the EU, some lower than forecasted due to smaller production and more fruit devoted for processing than expected. Pear exports decreased to 380.000 tons of which 87.000 tons went to the EU, due to smaller production, larger domestic consumption, and more fruit for processing. In addition, there were larger fruit stocks in the Northern Hemisphere. For 2015, forecasts production are at above normal levels as production rebounds following 2014 series of bad weather and to the natural lifecycle of plants, which allows fruit to blossom heavier one season and lighter the following season. 2015 is expected to be the “heavier” season.  A major increase in domestic consumption is expected for the three types of fruit as a result of the increase in production. In addition, higher volumes of apples and pears will be destined for domestic consumption due to the high inflation in dollar terms in Argentina. Exports are forecast to increase following the production rebound.

Apple production in Brazil decreased slightly in 2014 as a result of unfavorable weather conditions and a reduction in planted area. In 2013 Brazil exported 85.000 tons of apples, an 18 percent increase compared to the same period in 2012. Apple producers prioritized exports to recover from 2011. This situation will not happen in 2014, as the adverse weather conditions interfere in the volume and quality of the fruit.

Exports declined by 9 percent. The quality of the fruit has been damaged by the adverse weather conditions and the European markets taking 38.000 tons prefer the top quality fruit, without a damaged appearance.

Chilean exports of apples this year is likely to reach a total of about 770.000 tones, four percent less than last year. Abnormal weather during last spring, heavy frost for two consecutive days in mid-September of 2013, which affected all fresh fruit production in Chile, lowered pear output during this production season. Total production and exports are expected to be down over 10 percent when compared to the previous season. Pear exports reached 267.000 tons, all pear varieties are down in exports by over 10 percent. The only exception is the Packhams Triumph’s variety which expanded by 10 percent. Europe imported 184.000 tons apples and 44.000 tons pears.

New Zealand’s Apple and Pear growers have enjoyed a second year of good prices for their fruit in 2013/2014. Apple exports increased to 310.500 tons, of which 137.000 tons are imported in Europe. Sources indicate that because of strong offshore pricing early on in the shipping season every bit of fruit that could be found of saleable standard has been shipped. Now that prices have plummeted in Europe some growers who have had fruit shipped late into Europe (August to October 2014) may now wish they hadn’t bothered. It may be difficult for prices to maintain their current levels in 2014/2015 if exporters are to ship a forecasted export volume of 327.000 tons which will be five percent greater than 2013/2014 volume. This will be made all the more difficult with the anticipated large harvest of apples in the Northern Hemisphere.

It is likely there will be a resumption of the trend to less reliance on the UK and European markets in 2014/2015 by New Zealand apple exporters. From 2004/2005 to 2011/2012, consistently better returns in Asia have fueled a trend to replace European markets with ones in Asia. Relatively good pricing in Europe over the last 18 months has halted this trend, but those prices have begun to come under pressure in August through September 2014. The slightly later flowering time for the 2014/2015 crop won’t help exporters aiming to get fruit to Asia as early as possible but may give them a few extra weeks’ leeway to get a better supply and demand balance in Europe. The UK market is featured here to contrast a traditional destination for New Zealand apples with the emerging and developing markets of Asia and the Middle East. There is predictable market access for the fruit. It is price driven and takes the traditional varieties: Braeburn, and the traditional Royal Gala variety. Achieving higher prices has revolved around the Jazz and Pink Lady varieties supplanting the traditional varieties.

NZ pear exports in 2013/2014 have been surprisingly strong. Based on year-to-date shipment data, post has revised its export forecast for 2013/2014 to 5.350 tons. This represents a 19% increase compared to our previous forecast.

South African apple exports totals 459.000 tons based on updated Global Trade Atlas (GTA) data. With 117.000 tons the EU, which is the world’s second largest apple importer, is SA`s traditional market with UK being the biggest individual market. South Africa is a counter-seasonal producer, and is the Southern Hemisphere`s most convenient source for EU importers based on its proximity to the EU, and historical trading patterns, compared to other deciduous exporting countries like New Zealand, Chile, Brazil and Argentina. South Africa has been focusing on diversifying its export markets with expected growth to African markets such as Nigeria, Angola, Kenya, Zambia and Cameroon, and to Asia and the Middle East.