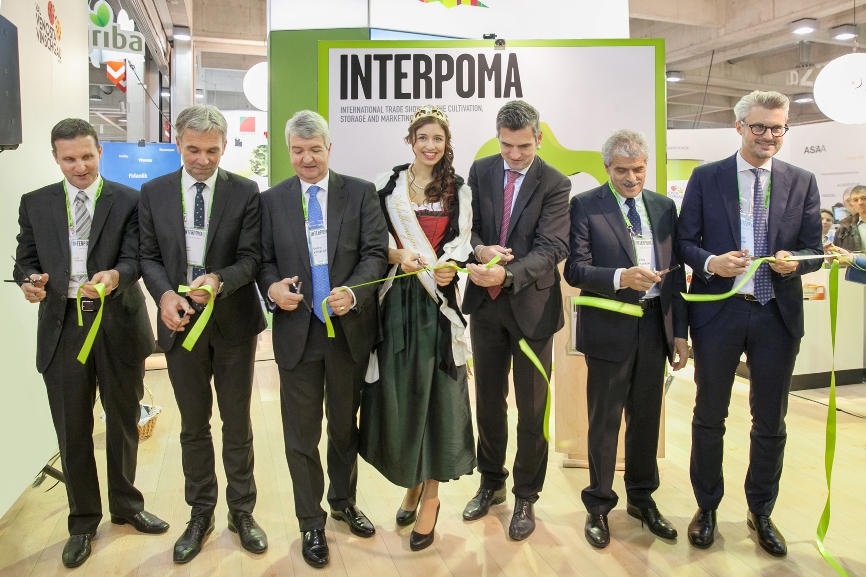 Interpoma Innovation Camp is the platform for the future of the apple-growing market: two days of intense work for five international teams made up of talent, startups, established companies and researchers who got together and brought along their innovative ideas in order to find technological solutions that can improve and help the apple industry and system.

“With the first Interpoma Innovation Camp, Fiera Bolzano has taken a first step to becoming a platform for thinking about the future of the apple industry,” said Fiera Bolzano managing director Thomas Mur.

“Our aim is to help the apple producing sector grow by bringing together heterogeneous and international talent, leaving them to think freely in order to elaborate concrete solutions with a focus on the market, the business model, consumers and the benefits that these solutions can provide.”

Thanks to close cooperation between Fiera Bolzano, IDM Sudtirol-Alto Adige, Consorzio Mele Alto Adige, the Laimburg Research Centre for Agriculture and Forestry, Südtiroler Beratungsring for fruit and wine growing and Whataventure, companies, young talent, industry experts, and startups at an international level were invited to an event that took place November 22-23 (the two days prior to Interpoma) with the aim of leaving aside individuality and working in teams followed by experts, who accompanied each work team in the process of developing new ideas in various areas to bring something useful for the market. During these two days the international teams worked on five ideas.

Repple is the team awarded first prize for the best idea in terms of concept, development, presentation and business model: the Repple group worked on the possibility of extracting oil from apple seeds, useful in the field of cosmetics and pharmaceuticals. An innovation well applicable to the market and with a very high earning potential. Compared to other already existing extraction systems, this organic process obtains a high quality oil from these seeds.

“It’s amazing to think I’ve received the award. I’m really happy because this project can be very useful for all the South Tyrol and all elements of the production chain, from the farmers who produce the raw material, to those who process the product and therefore can recover these parts which would be discarded, and also the nutraceutical producers who will be able to exploit this valuable component in their formulations,” explains Debora Decorsi of the Laimburg Research Centre.

Second place went to the Smart Orchard idea by an international team, that included France, Serbia, Nigeria and Italy. The project involves artificial intelligence, or the creation of an app with a strong impact on health and the environment, linked to the analysis of data provided by sensors that analyse the nutritional components of plants, by weather stations that anticipate atmospheric phenomena, and by digital gauges and flow meters. This would allow end-users to have the right information at the right time, reduce the consumption of water and fertilizers, increase the size of the fruit and monitor the weather conditions and therefore better manage the various stages of the cultivation process.

The third idea awarded involves a marketing idea called “track your apple”, with the aim of transferring the value of the apple and know-how to the consumer and help better commercialise the apple through targeted marketing actions. This app is oriented towards the entertainment of consumers who, through a code placed on the apple, can win prizes online but also access various types of information regarding apples, their production, and the different varieties, properties and qualities. It means increasing awareness about the quality of one product rather than another for the consumer and also being able to maintain the highest product prices.

All the teams worked enthusiastically and contributed to innovation, today more important than ever. There were two ideas submitted to the international jury of Interpoma Innovation Camp, which, however, failed to attain the podium: regarding the systems sector, the Revotree – think waterless team worked on the creation of sensors for irrigating the land; whereas, for the field of cultivating, Rainbow Nets developed the idea of nets able to better distribute the light according to its different spectra, so that it strikes the fruit with different colours according to the various ripening stages, so as to obtain maximum results in terms of quality.

Interpoma Innovation Camp was a first boost to the apple market in order to look ahead, and can develop and expand in the next editions. It showed what can be achieved with two days’ work, through innovative working methods and processes, typical of startups, while creating a strong community of pioneers and interesting people who took part and who proposed new roads that help enhance the ecosystem of South Tyrol and the entire apple producing industry.

Category: Uncategorized
Tags: 2016 events, apple marketing, apple production, apples, Bolzano, Fiera Bolzano, Interpoma, Interpoma Innovation Camp, Thomas Mur, trade shows
We use cookies on our website to give you the most relevant experience by remembering your preferences and repeat visits. By clicking “Accept All”, you consent to the use of ALL the cookies. However, you may visit "Cookie Settings" to provide a controlled consent.
Cookie SettingsAccept All
Manage consent