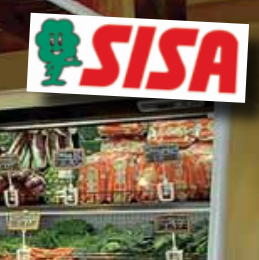 Sisa Centro Sud, the branch of the Italian retail multiple Sisa that looks after the central and southern regions of the country, controls around 500 points of sale with floor areas ranging from 200 to 1200 m² in Campania, Apulia, Basilicata, Molise, upper Calabria and lower Lazio from its operations headquarters at Gricignano di Aversa (province of Caserta). The company philosophy is always to try to favour local and short supply-chain products of excellence and products from Italy.

In apples and pears, Italian fruit are very strong: 90% of the apples on the shelves are from the Trentino-Alto Adige region, with a strong show of PDO labels such as Melinda and Val Venosta as well as generic Trentino fruit. Only 10% are imported, and only at the end of the season. Dr Palladino explained that “in this area too, PDO and PGI labels are very important for consumers, particularly in varieties such as Golden Delicious, Red Delicious, Fuji and Royal, but also for Granny Smiths”. The same holds true for pears, which to a very great extent (over 90%) come from Emilia Romagna and largely in varieties such as Abate and Conference, while Kaiser and Williams have not achieved the same popularity.

The best comes from Sicily

In citrus fruit, much importance is attached to red oranges such as Sicily’s Tarocco variety, sold under the red oranges from Sicily PGI only during its season. “The market has responded very well, as consumers appreciate not only these oranges but all the GPI and PDO products from Sicily,” commented Agostino Palladino, the head fruit and vegetable buyer for Sisa Centro Sud. Tomatoes are one of the greatest strengths of Sisa Centro Sud, which mainly sources all the varieties from Sicily: cherry, Piccadilly, different oblong types, ribbed tomatoes etc. A small proportion also come from lower Lazio, particularly from the Fondi area, and the imported product comes from Morocco. As Palladino explained: “Sicilian tomatoes allow us to discover a very precise identity of our own that is unique in the world”. The potatoes are also local – the centre and south of Italy can boast a crop of a good standard – with 60% coming from Avezzano (Abruzzo) and Campania and the remaining 40% imported from France. Leafy vegetables and lettuces are sourced almost exclusively from Battipaglia (Campania), with the sole exception of iceberg lettuces, which are imported from Spain, Germany and the Netherlands.

Sisa Centro Sud has also developed very successful branded lines of fresh cut products, with twelve Sisa brand products including baby leaves, baby rocket and baby spinach and a further six under the Primo low-price brand, as well as Sisa brand potatoes. Palladino emphasized that “the market has responded very well, particularly to the Primo mark, which price-for-price offers better quality than our competitors in this area”.  

Category: Uncategorized
Tags: Italy, Retail, sisa
We use cookies on our website to give you the most relevant experience by remembering your preferences and repeat visits. By clicking “Accept All”, you consent to the use of ALL the cookies. However, you may visit "Cookie Settings" to provide a controlled consent.
Cookie SettingsAccept All
Manage consent