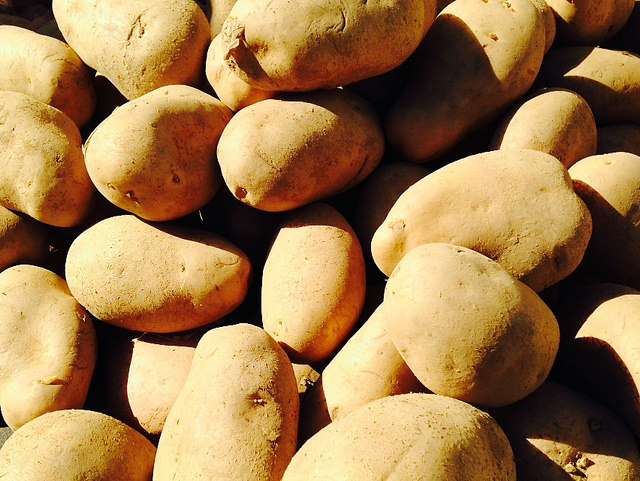 Spunta is still present in the four countries, though with a sharply increased area in 2015. The number of hectares has fallen in recent years for Desiree and Kennebec and multiplication took place in just 3 of the 4 countries.

The total planted area for the 12 top French fry varieties was down by 0.5% due to the high decrease recorded for Ramos, Markies and Victoria. Other main varieties, such as Challenger, Bintje and Agria, showed higher figures than last year. Agria returned to its 2013 level. Despite an increase in 2015, Bintje is considered on a downward trend over the longer term. The area for Fontane was almost unchanged but will probably start to rise again in coming years.
In the crisps market, Lady Claire accounts for 50% of the total area covered by the 4 main varieties and increased for the 4th year in a row. Lady Rosetta went down for the 5th successive season, while Hermes maintained its level. The combined area for these 3 varieties was 2,478 ha, down from 2,518 ha in 2014.
For the 5th consecutive year, there was a decrease in earlies and second earlies (mainly) for the processing market: -37% for Miranda, -15% for Première and -11% for Berber.

After a quite hot and dry growth period in the summer, seed potato crops in North-West Europe reached on average a normal yield, but 10-20% lower than last year. Overly dry weather in June affected the number of tubers per plant, the average size was also smaller than in 2014, and the growth took place quite late. However, the variations between varieties, regions and fields were considerable depending on the rain received in July. Defoliation and harvest occurred later than usual. The quality was acceptable and the skin finish quite good, with less soft rot problems than last year but more virus problems due to intense aphid flights, leading to more rejections or downgrades in class.

Due to a late harvest, some early export market opportunities were missed, leaving some very specific varieties without a sales outlet.The global price level was difficult to hold. Export possibilities for this season would be limited by the currency devaluation in Algeria, troubles in several Middle East countries, and other geopolitical events. In some cases, the large sizes of seed potato had already been sold on the ware potato market due to attractive prices at the start of the season. Some changes happening in variety choice on the domestic markets were also expected to influence seed potato prices, such as lower demand for Bintje; strong demand for Fontane, Challenger and Innovator; and good demand for new firm flesh varieties.

Category: Uncategorized
Tag: NEPG; potatoes
We use cookies on our website to give you the most relevant experience by remembering your preferences and repeat visits. By clicking “Accept All”, you consent to the use of ALL the cookies. However, you may visit "Cookie Settings" to provide a controlled consent.
Cookie SettingsAccept All
Manage consent