The marmalade-loving cartoon character will promote the sweet taste of SanLucar citrus fruits in Germany and Austria (Valencia, Spain – 06 November 2017). SanLucar, the premium brand for fruit and […]
Thu 09/11/2017 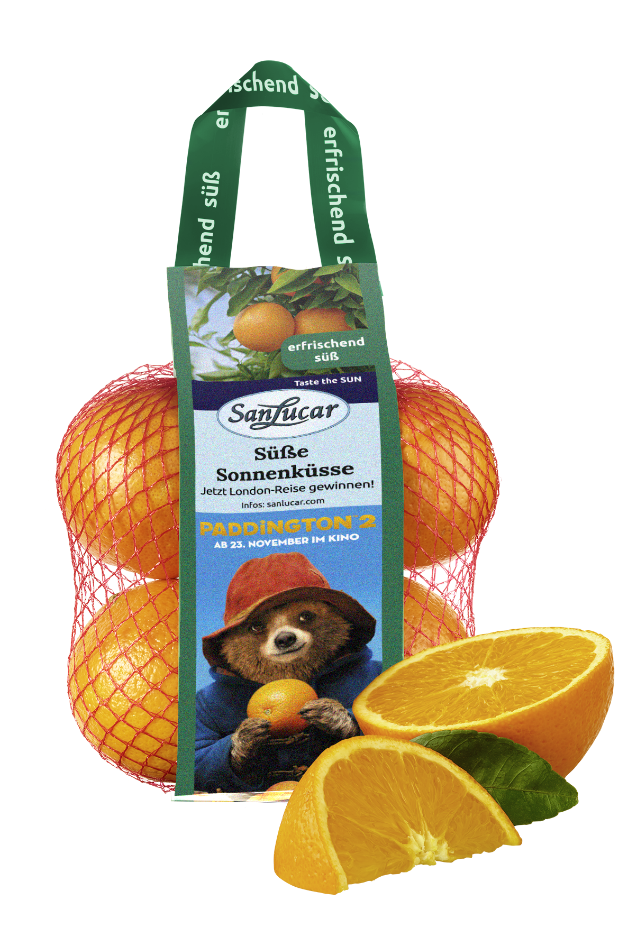 The marmalade-loving cartoon character will promote the sweet taste of SanLucar citrus fruits in Germany and Austria (Valencia, Spain – 06 November 2017). SanLucar, the premium brand for fruit and vegetables, and Paddington Bear, the most famous bear in British children’s literature, launch a new campaign to animate children to eat fruit on a daily basis. After an initial collaboration in 2014, the cooperation between SanLucar and the film producer Studiocanal goes into its second round with the imminent release of “Paddington 2” (in Germany on 23 November; in Austria on 24 November). The furry lover of marmalade will decorate the packaging of SanLucar lemons, oranges and clementines, and as well the fruit and vegetable departments of supermarkets in Germany and Austria.

The promotion includes also a raffle for a trip to London for two adults and two children. The lucky winners will stay two nights in the British capital, where the Peruvian bear was adopted. The action runs from 13 November 2017 until 30 January 2018. SanLucar is once again relying on films for kids to underline the importance of fruits and vegetables in children’s diets. In recent years, the most charismatic protagonists have been ambassadors of SanLucar products’ taste. Amongst others, Shaun the Sheep, Heidi, Kung Fu Panda, Ice Age and now once more Paddington Bear. They should encourage the youngsters to discover for themselves that fruits and vegetables are both – sweet and healthy. As Stephan Rötzer, CEO of SanLucar, says,”It is not always easy to get our children to take everday the vitamins and nutrients they need for their development and growth. Therefore, these figures are a good way to foster healthy eating habits that can last into adulthood”.

Category: Uncategorized
Tag: SanLucar; Paddington; New campaign; 2017
We use cookies on our website to give you the most relevant experience by remembering your preferences and repeat visits. By clicking “Accept All”, you consent to the use of ALL the cookies. However, you may visit "Cookie Settings" to provide a controlled consent.
Cookie SettingsAccept All
Manage consent