“We are starting 2014 with new products adapted to the demands and lifestyle of the consumer” is how Eduardo Córdoba, Primaflor’s National Sales Manager, explained Primaflor’s new campaign. Primaflor are […]
Fri 14/02/2014 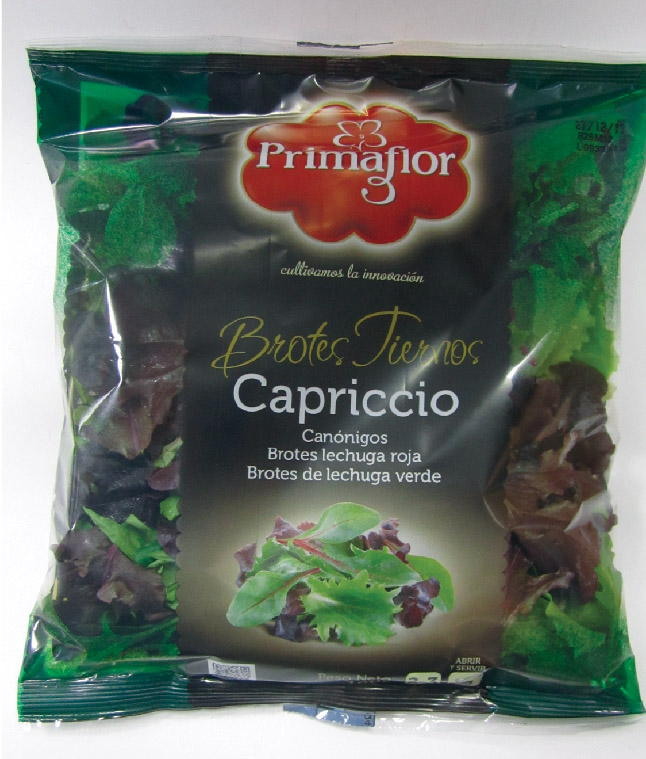 “We are starting 2014 with new products adapted to the demands and lifestyle of the consumer” is how Eduardo Córdoba, Primaflor’s National Sales Manager, explained Primaflor’s new campaign. Primaflor are increasing their product range and making use of their logistic and commercial infrastructure to become an agrifood company.  In spite of the maturity reached in the fresh cut salad market, Primaflor increased its sales another 3.5% in 2013. In baby leaves the increase was more noticeable due to the added value of it being a new product. “The consumer is looking for new tastes and textures” explained Eduardo Córdoba, and so the company is going for new products using new ingredients and tastes for consumers who are looking for variety. This was their strategy when they launched their very successful baby leaf salads – Capriccio, Delicious and Luxure. “We are restructuring to adapt and change our portfolio” Eduardo Córdoba told us and not only the products but also the format. For this reason, the Almeria company has included smaller containers as consumer tendency is to buy little and often.
This is why Primaflor are expanding their existing ranges with products which add value. “In Spring we will be launching a completely new range”, he mentioned without revealing the actual products although he would say that it would be 4 products which would complement their fresh cut salad range. Some time ago they launched a range of sauces and other complements which has been very successful judging by the 2 million euros invoiced in 2013.  With respect to salad products, the iceberg lettuce is still Primaflor’s biggest seller, selling 150 million lettuces in 2013, an increase of 4 million from the year before. The national tendency is for iceberg sales to decrease as fresh cut salad sales increase. To offset this, Primaflor has expanded beyond the borders where they have established a presence in the United Kingdom, the Nordic countries and Eastern Europe.  PE

Category: Uncategorized
Tag: Salads
We use cookies on our website to give you the most relevant experience by remembering your preferences and repeat visits. By clicking “Accept All”, you consent to the use of ALL the cookies. However, you may visit "Cookie Settings" to provide a controlled consent.
Cookie SettingsAccept All
Manage consent