This year’s Fresh Market Conference was held on September 25 in the Polish town of Ożarów Mazowiecki at the stylish Mazurkas Hotel. It was the key opportunity of the year […]
Tue 17/11/2015 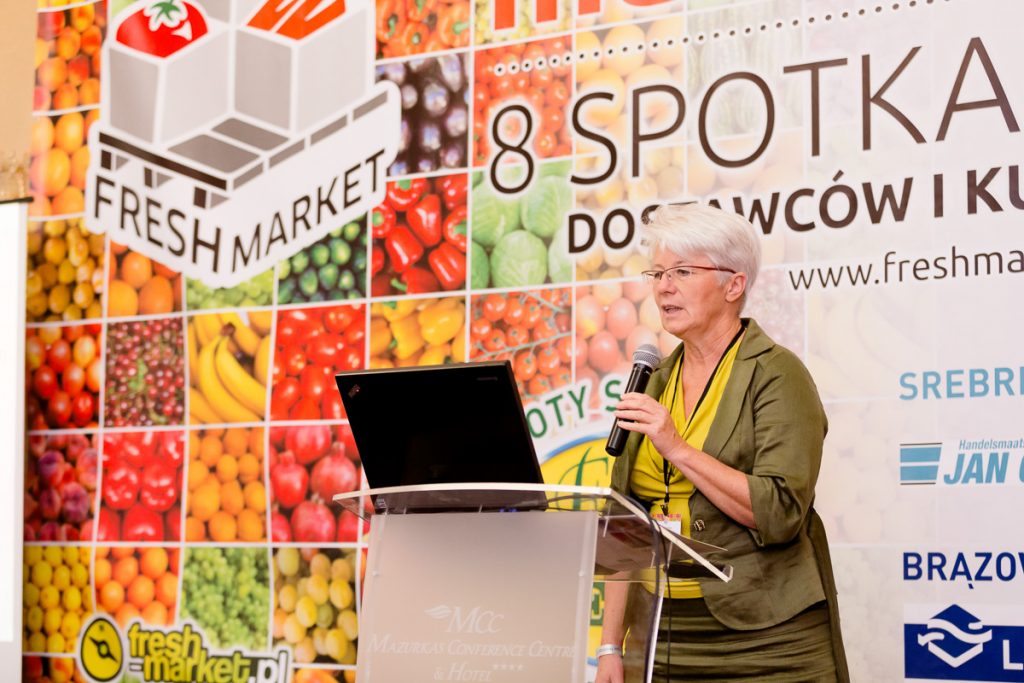 This year’s Fresh Market Conference was held on September 25 in the Polish town of Ożarów Mazowiecki at the stylish Mazurkas Hotel. It was the key opportunity of the year in Poland to establish business contacts personally with the biggest retail chains, with clients from 15 countries.

The most important event of the year for Poland’s fruit and vegetable industry, Fresh Market Conference was created in response to the changing needs of the market. The core of the conference involved trade consultations between fresh produce suppliers and representatives of retail chains, providing excellent opportunities to make deals and exchange of new ideas on how to cooperate efficiently in Poland’s fresh produce sector.

Widely promoted in foreign trade media, the Fresh Market Conference was also an opportunity for participants to present and promote their products, whether in the conference catalogue, during a lecture by them, or by purchasing a sponsor package. In the course of one day, famous groups and companies such as Sunsad, Redskar, Polfarm, Coshtella, Markiepol and Fruitino met with chains such as Kaufland, Dino, Tesco, Carrefour, Intermarche, Selgros, Makro, Piotr & Paweł and Marcpol. In addition to these meetings, this year’s conference gave participants many valuable opportunities to establish contacts with international firms. Over 160 companies from Poland, Italy, Spain, France, Chile, Ukraine, Holland, Egypt, Denmark, Great Britain, the Czech Republic, Hungary, Germany, Turkey and Greece were participants.

In the market halls, buyers and conference guests were able to visit many fresh produce stands and talk to traders of companies such as Jan Oskam, Suncrop  France, Societa Agricola Mioorto Srl, Frutti Felici Soc. Coop. Agricola, Frutas Hortisol, SL and Fairtrasa Holland B.V. Guests could also meet producers of containers and find out about the offerings from suppliers of refrigeration and other services for the fruit and vegetable industry. The conference’s ‘matchmakers’ were specially trained for the occasion to help make the contacts between business partners as useful as possible.

The third part of the conference and fairs consisted of lectures by fresh produce industry experts covering areas such as the current trade situation for the sector, price analysis and forecasts for the coming season. During the panel discussion, participants had the opportunity to ask the experts questions of interest to them, obtaining professional support and advice for their company.

A lecture by Zbigniew Niesiobędzki, representing the Polish-Chinese Business Council, addressed a very relevant topic for fresh produce producers and exporters – how to conquer the Chinese market, particularly in the context of existing commercial opportunities, the many legal regulations that sometimes hamper sales, and the outlook for bilateral development. Bioekspert’s Dorota Metera, meanwhile, focused on the marketing and sale of organic produce in supermarkets in Poland. Metera highlighted that organic fruit and vegetables are now on the shelves of every supermarket chain in Poland and increasingly bought by customers who value organic fruit and vegetables for health reasons. And Piotr Barański from Fern Partners gave an interesting lecture on the management of prices and profitability in the fruit and vegetable sector.

Meetings of companies with retail chains.

Awards for the most innovative product and for the product chosen by readers of the fresh-market.pl portal were made during the conference. This year, four products competed for the award: the kiwi Soreli presented by Frutti Felici, the MPaper packaging produced by the Spanish company Cristobal Meseguer, the new broccoli EasyBroq from Syngenta and the Palermo pepper from Rijk Zwaan. The Fresh Market Award – Product of the year 2015 went to Rijk Zwaan for the Palermo. This product was also chosen by fresh-market.pl readers and won the prize in internet voting.

The retailer Kaufland is presently one of two major food chains in Poland which is growing fast. It plans to open 30 new stores in in Poland this year. Along with Lidl, Kaufland is part of the Schwarz group, which is investing in many modern supermarkets throughout the country. The group has so far built nearly 400 Kaufland hypermarkets and supermarkets in mini-centers, shopping malls and housing estates, both in big cities and medium size towns. Kaufland now offers its customers a fresh fruit and vegetables assortment several times bigger than that of discount outlets in Poland.

Particular emphasis is put on the highest quality of organic fresh produce and on locally grown potatoes, onion, cabbages, carrot. lettuce, apples, pears, plums, cherries and nuts, according to Kaufland’s fresh produce purchase manager Krystian Nowakowski. In Poland, the most recognisable of Kaufland’s store brand fresh produce – a key part of its growth – are organic apples, bananas, lemons, tomatoes, peppers and onions. These products are sold under its FreshLine label. Kaufland also offers its own brand products under the K-classic label for premium fresh produce sold at prices that are very competitive compared to other Polish supermarkets, including discounters, Nowakowski said.

The amount of fresh fruit and vegetables sold by Kaufland in the first nine months of 2014 was up 8% and 12% respectively on the same periods in 2013 and 2012, Nowakowski said. Net revenue for fresh produce in Jan-Sept last year was 2.66% above that for the same period in 2013.
The top sellers among the fresh produce sold at Kaufland stores in Poland items were apples, with sales up 11% for Jan-Sept 2014, and tomatoes, up 13%, Nowakowski said. Kaufland’s spending on promotion, marketing and strengthening the chain’s image was 3.5% higher in three quarters of 2014 of than in the same time in 2013.

Biedronka maintains the high level of its fresh produce

Fruit and vegetables are still among the most important items in Biedronka stores in Poland and, as much as possible, based on local Polish produce. For several years, Biedronka has been developing its fresh produce offering according to with the focus on maximising freshness. According to Biedronka’s media spokesperson Agnieszka Pelc-Sławińska, this year the chain started selling apples from Poland by specific varieties, so as to increase the ability of its customers to purchase their favourite fruits. “We are continuing to expand our assortment of organic fresh produce by offering apple varieties such as Gala, Jonagold and Ligol,” Pelc-Sławińska said. “Apart from apples, we offer also pears – the Lukasówka, Conference and Klapsa varieties. and in tomatoes, for example, from the start of this year the local variety tomimaru muchoo.
“We note the rise in sale of fruit and vegetables in all our 2,600 stores in over 1,000 locations, Pelc-Sławińska said. “We plan to open 300 more outlets in the next three years. Regarding fresh produce sales, in 2014 we sold 1.5% more fruit and 1.8% more vegetables than in 2013. The biggest rise was in the category of apples – up 4.9% on 2013 and up 3.1% for Jan-Sep this year compared to the same months last year.” The growth for vegetables was slightly lower. “In 2014, we sold 0.8 % more tomatoes and 0.6% more peppers than in 2013. However, for the year to September 2015 we have sold 0.5% more tomatoes and 0.3% more peppers compared to the same period last year,” Pelc-Sławińska said.

The retailer Dino in new locations in Poland

Based totally on Polish capital, the retailer Dino this year once again participated in the Fresh Market Conference. Maciej Galicki, from Dino’s commercial department for fruit and vegetables, said the chain aimed to meet with retail representatives to discuss increased trade, and to connect with suppliers of quality Polish produce.
“Dino is well-known for the very good class of products in its stores,” Galicki said. “Today our chain is present, with over 350 stores, in big and small towns in many regions of the country. In 2015, we have opened almost 100 new shops. The average sales area is 1,100 m² and the assortment reaches 28,000 items.
“In view of the combination of cheaper fruit and vegetables and the weaker buying abilities of many Polish clients, we emphasise the wide choice of very good quality fruit and vegetables from the healthy Polish countryside. About 7% of all these products comprise fruit and vegetables that are sold under our own label, ‘Everyday fresh deliveries’. We are very conscious of the taste and quality that consumers demand from our fruits and vegetables.
“People seek often particular varieties of fresh produce. Besides, they are keen on purchasing ready-made snacks based on fresh fruits and vegetables, or even ready-to-eat fresh dishes. We have introduced new lines of such products that are still little-known by Polish customers. We plan to sell these fruit novelties in all our stores.”
“In the next three years, we plan to invest €9 million annually in construction and in transforming our stores across the country. Now we are focused on new locations in regions such as Małopolska or central Poland, where we plan to open 50-70 new outlets, and in Silesia, where we plan to open 30,” Galicki said.

Category: Uncategorized
Tags: events, Fresh Market Conference, Poland, Polish supermarkets
We use cookies on our website to give you the most relevant experience by remembering your preferences and repeat visits. By clicking “Accept All”, you consent to the use of ALL the cookies. However, you may visit "Cookie Settings" to provide a controlled consent.
Cookie SettingsAccept All
Manage consent