Press release & Photo by FRUITECOM The international digital contest that engaged consumers in the creation of “artworks” for Marlene® ’s 25th anniversary ended on 15 November. Art schools were […]
Thu 10/12/2020 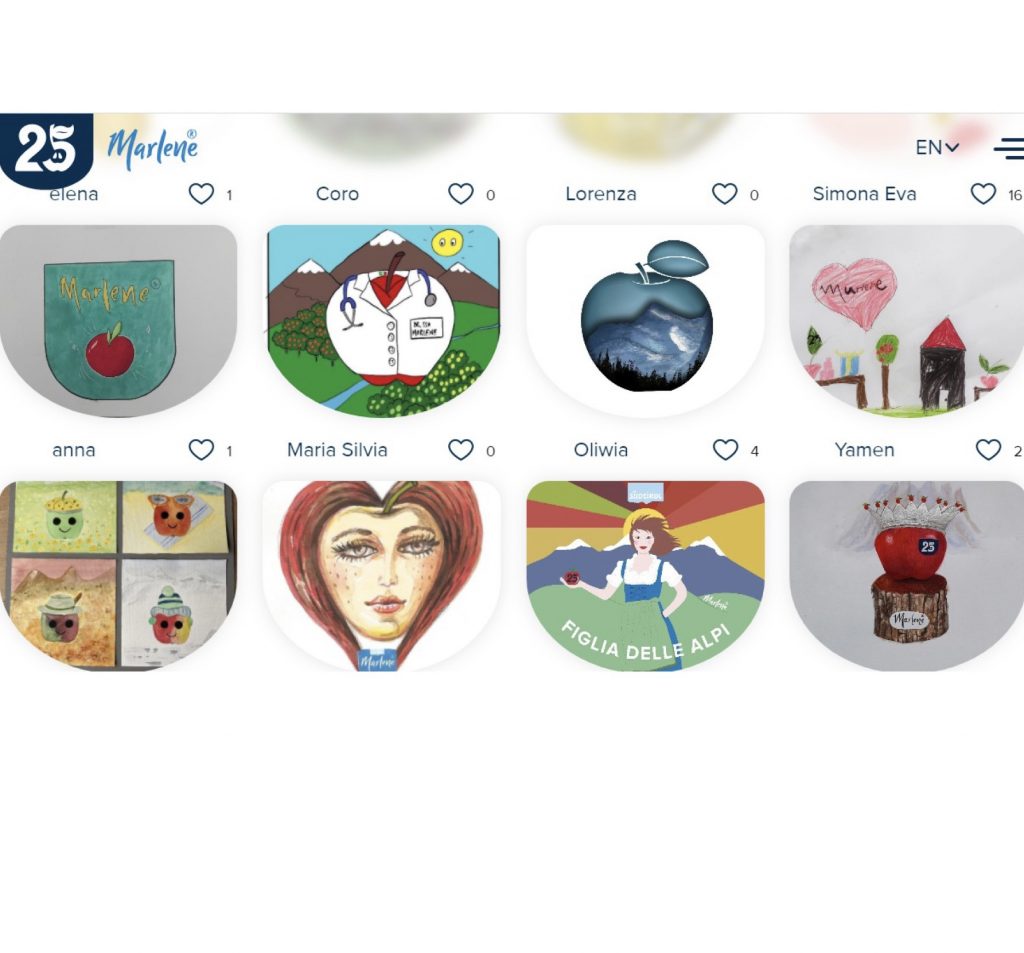 The international digital contest that engaged consumers in the creation of “artworks” for Marlene® ’s 25th anniversary ended on 15 November. Art schools were also involved. The countdown has begun to the announcement of the finalists and winner.

(Terlano 10 December) – Over 6,000 images from 36 countries and 25,000 likes received by the gallery on the 25.marlene.it website, which brings together all the “artworks” that have arrived in Terlano. These are the figures for a successful initiative: the international digital contest launched by VOG to celebrate the 25th anniversary of Marlene® , the South Tyrolean Consortium’s flagship brand.

Launched on 15 September and concluded two months later on 15 November, the contest gave consumers the opportunity to express Marlene® ’s values and illustrate what the Daughter of the Alps apple represents to them. “We received a lot of contributions: if we printed them on a sheet of A3 paper and lined them up one on top of the other, we would reach the height of the Sciliar, one of the iconic mountains of South Tyrol – Südtirol,” explains Hannes Tauber, Marketing Manager of the VOG Consortium. “It is a demonstration of affection for Marlene® that fills us with joy, while also showing how our brand can inspire the imagination of a wide range of people in many countries and of all ages”.

VOG has brought together 6,118 creations from all over the world, most of them from Italy and many from Spain, as well as from the Netherlands. Marlene® has also provided a platform for many talented young artists from around the world and to students from art schools in Italy and Spain, who made a significant contribution to the project. “The creative vision of young artists is important to us,” continues Hannes Tauber. “Our contest involved over 300 classes in Italy and 250 in Spain, which sent their interpretations, offering a fresh and in many cases truly innovative look.”

Now a selected jury has the difficult task of choosing the 25 best works on the basis of criteria such as aesthetic quality, the celebratory nature of the content and the emotions transmitted by the creation. The top ranked artwork will star in Marlene® ’s corporate image for the whole year of 25th anniversary celebrations. The 25 finalists will also experience the world of Marlene® first-hand through a trip to South Tyrol – Südtirol.

So await 15 December to discover the selected works and the overall winner.

Category: Uncategorized
Tags: Apple, digital contest, Marlene®
We use cookies on our website to give you the most relevant experience by remembering your preferences and repeat visits. By clicking “Accept All”, you consent to the use of ALL the cookies. However, you may visit "Cookie Settings" to provide a controlled consent.
Cookie SettingsAccept All
Manage consent