Stokrotka Sp. z o.o. is a part of the capital group Emperia that is investing in many modern supermarkets aroound Poland. Emperia has so far built 251 Stokrotka markets and […]
Tue 31/03/2015 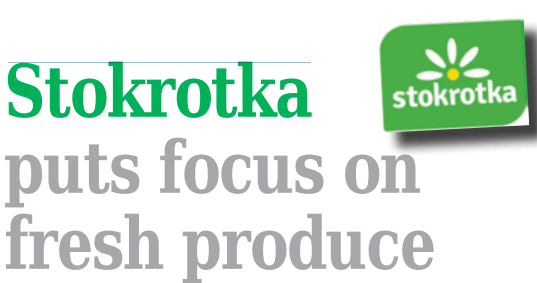 Stokrotka Sp. z o.o. is a part of the capital group Emperia that is investing in many modern supermarkets aroound Poland. Emperia has so far built 251 Stokrotka markets and supermarkets located in mini-centres, shopping malls and housing estates in big cities and medium-sized towns. Stokrotka markets now offer their customers an assortment of fresh fruit and vegetables several times larger than those of discount outlets in Poland.

New groups of their own fresh produce

Particular emphasis is put on the highest quality fresh produce and on locally grown potatoes, onion, cabbages, carrot and lettuce, as well as domestic apples, pears, plums, cherries and nuts. Essential to the further development of Stokrotka markets is the visibilty of its own brands on outlets shelves. The most recognisable groups of Stokrotka own brand products are ‘Only in Stokrotka’ and ‘Yes! – bought in Stokrotka’. These product groups also include fresh produce sold at very competitive prices compared to other Polish retailers, including discounters.

Investments in logistics and greater income

In July 2013, Stokrotka began its own logistics platform from its distribution centre in Teresin near Warsaw with nine regional warehouses located across the country. Thanks to these investments, the chain’s competitiveness has significantly increased. Customer access to fresh local produce has also grown. The amount of Stokrotka’s fresh fruit and vegetables sold in the first nine months of 2014 rose about 8% on the same period the previous year and 12% on the corresponding period in 2012. Net revenue from fresh produce sales for the first nine months of 2014 grew 2.66% on the same period in 2013. The best-selling fresh items in Stokrotka’s stores in Poland were apples, with sales up 11%. There was a 13%. increase in tomato sales. Meanwhile, Stokrotka’s spending on promotion, marketing and strengthening the chain’s image has received a 3.5% boost. This year, Stokrotka plans to open 30 new outlets in Poland.

This article appeared on page 19 of edition 136 of Eurofresh Distribution magazine. Read it here.

Category: Uncategorized
Tags: Retail, Stokrotka
We use cookies on our website to give you the most relevant experience by remembering your preferences and repeat visits. By clicking “Accept All”, you consent to the use of ALL the cookies. However, you may visit "Cookie Settings" to provide a controlled consent.
Cookie SettingsAccept All
Manage consent