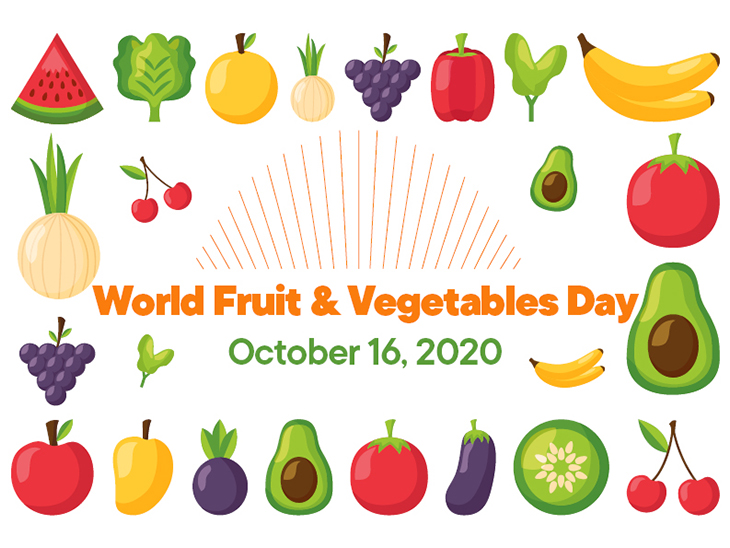 This year’s World Fruits and Vegetables Day coincides with World Food Day. “Fruits and Vegetables: an opportunity for a life in sustainable health” is the motto of this 3rd Edition. The main objective is to make the world population aware of the importance of the consumption of fruits and vegetables. Many countries around the world will develop activities in around this day.

The daily consumption of fruits and vegetables is key to following a healthy diet. In this sense, World Fruits and Vegetables Day is an initiative that seeks to sensitise the world population about the importance of daily consumption of fruits and vegetables for the promotion of health and the prevention and control of obesity and chronic diseases, improving world food security, as well as highlighting its role in the sustainability and biodiversity of our planet. Furthermore, this day coincides with World Food Day, which this year has the motto of “Social protection and agriculture: breaking the cycle of rural poverty.”

On the other hand, chronic non-communicable diseases, such as cardiovascular diseases, cancer and diabetes, are responsible for 60% of deaths in the world, while obesity causes 2.8 million deaths a year. Figures that are undoubtedly chilling, but that could be greatly diminished with healthy lifestyle habits, among which regular physical activity and healthy eating stand out.

According to the Spanish National Diet Intake Survey (ENIDE 2011), the average daily consumption of fruits in adults is 208 grams, and that of vegetables is 189 grams, that is, a total of 397 grams / day, which is no more than 3 servings. On the other hand, 56% and 54% of adults do not take fruits or vegetables on a daily basis, respectively, figures that reach 43% and 63 respectively in children and young people (National Health Survey 2011-2012). The insufficient intake of fruit and vegetables in Spain is associated, as in other European countries, with the high consumption of meat products and refined cereals.

To celebrate the World Fruit and Vegetables Day, a series of activities are being developed in the different countries of the International Alliance of “5 a day” Associations.

In Spain, a campaign has been launched last week on social networks called “Practice the 5”, whose objective is to promote the consumption of fruits and vegetables among the population by uploading a photo eating fruits and making the “5” gesture with the hand. Furthermore, within the framework of the International Fruit Attraction fair, fruit and vegetable skewers will be distributed. A Healthy Menu will also be offered consisting of a complete salad and fruit for dessert. Workshops on natural juices with fresh fruits and vegetables will be given for children.

In Chile, healthy eating sessions will be held throughout the month of October for parents and teachers of vulnerable and rural schools and healthy cooking sessions with the participation of a nutritionist and chef in schools, where they will be taught to cook healthy with easy-to-use recipes and with affordable ingredients. They will participate in large-scale activities such as scientific fairs, community parades, etc. where fruits and educational material will be given to the attending community.

Gifts will be given to the entire school community of 12 vulnerable and rural schools for the celebration of Teacher’s Day. Award to those children who buy healthy snacks at the school kiosk, or who bring healthy snacks from home. The consumer who attends to buy in the supermarket will also be educated where there will be a healthy stand attended by a nutritionist, who delivers healthy recommendations and messages to consumers in the metropolitan region and V region. Healthy workshop for workers in commercial premises.

In Mexico on that day, Mexican seasonal fruit will be delivered to the population, accompanied by an informational brochure alluding to World Food Day and World Fruit and Vegetable Day, these activities will take place in the main avenues of Mexico City (Paseo de la Reforma), as well as in Public Markets of the City, in order to promote the consumption of fruits and vegetables. Likewise, the population that receives the fruit will be invited to take a selfie with the fruit and post it on the FB / 5xDía page, inviting their friends to like it; the three photos that receive the most “likes” will receive a gift.

In Uruguay, the entire population has been invited to join together in spreading the Awareness for a Healthy Eating and greater consumption of Fruits and Vegetables around World Food Day and World Fruits and Vegetables Day. They will also participate in the 2015 World Food Day to be held in Cambado Park (Av. Luis Alberto de Herrera 4196), where they will have an information booth of the Program 5 al Día Uruguay and MAES from 9 to 17 hours.

In Venezuela, the supermarket chains of 5aldia Venezuela will spread the message on their social networks: Happy World Day of Fruits and Vegetables!