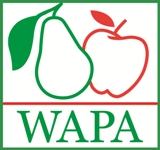 WAPA –  the World Apple and Pear Association – has welcomed a Chinese organisation as member.

The Apple and Pear Section of the China Chamber of Commerce of Foodstuffs and Native Produce (CFNA) officially became a WAPA member on September 2 in Xi’an (Shaanxi, China) on the occasion of the International Fruit Conference.

In a press release, WAPA said that with the inclusion of the Chinese member, it now represents close to 70% of the world’s apple and 90% of its pear production.

WAPA president Daniel Sauvaitre (ANPP, France), who attended a signing ceremony on behalf of WAPA to mark the milestone, said the accession of CFNA to WAPA is a significant step for the global representation of WAPA, given the great potential of the Chinese apples and pear production.

“I am very pleased that we have filled this gap and identified the right partner to add a Chinese voice at the table of the association, as this will further enhance the global discussions of the Association,” he said.

“China is by far the leading producer, but also represents a growing market for many apple and pear suppliers around the world. The participation of China in the efforts of WAPA to boost the category and move production towards varieties demanded by consumers is a clear added value for all,” he said.

WAPA is also currently in the final stages of concluding other membership engagements. It was created in 2001 as a platform to address global challenges and to identify new opportunities for the apples and pears growers’ communities around the world. It represents the 20 leading apples and pears associations from both the Northern and Southern Hemispheres.