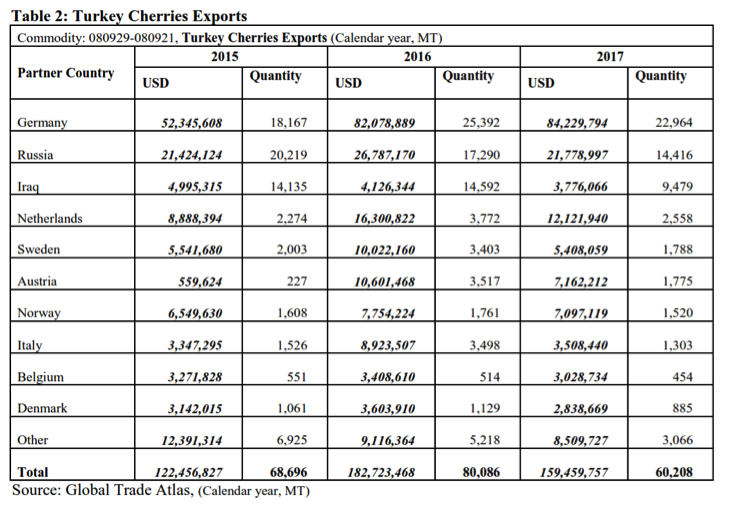 After a slight drop in 2017/18, the forecast for Turkey’s total cherry production in 2018/19 is up 12% to 590,000 tons. Of this total, 440,000 tons are sweet cherry and 150,000 tons are sour cherry. A warm winter and spring with almost no frost damage accelerated fruit growth throughout the country, and harvest took place ten days earlier than normal in most regions. Despite general increases in production, some regions suffered yield losses, such as Kemalpasa, in Izmir due to heavy winds during the flowering.

Despite fluctuating cherry production, Turkey has remained the world’s top cherry producing country and among the top-three exporters. The crop area for cherry production in Turkey continues to gradually increase due to new investment, stimulated by demand in export markets. Sweet cherry is grown mainly in the centre and west of the country.

According to Turkish official data, the total estimated number of all cherry trees was about 34.5 million in 2017.  The total number of bearing trees for sweet cherries increased from six million in 2005 to 21.5 million in 2016. Sweet cherries tree numbers have increased 35% in the last five years alone. Sour cherry production area has not increased during the same period. Farmers have been replacing their older variety sweet cherry trees with higher yielding varieties that meet the specifications of export markets. The increase in better quality cherries also helps also to increase quality of cherries for the domestic market.

Turkey’s cherry exports account for 15% of total global cherry exports. Chile and the US are the other leading global exporters. In 2017, the main destinations for Turkish cherries were Germany (23,000 tons), Russia (14,400 tons) and Iraq (9,500 tons). While other stone fruits were impacted by Russia’s ban on many Turkish products in 2016, cherries were not, meaning that export market was maintained.