FERRMED, the multisectoral non-profit association devoted to improving freight rail transport and industrial competitiveness in Europe and its neighbouring countries, will present next week, Wednesday, June 1, the preliminary conclusions of the “FERRMED Study of traffic and modal shift optimization in the EU” that define the key aspects of its European sustainable and efficient transport plan, in a session at the Barcelona Logistics Show (SIL)

These improvements will allow the achievement of the EU Great Deal’s objectives in terms of sustainability, and significantly reduce the inefficiency of the European land transport system.

This is undoubtedly the first detailed study ever done on the system of land transport of goods (road, railway, and inland waterways). The study’s conclusions will facilitate the establishment of a coherent transportation network improvement plan at EU level to attain the European targets in railway share by 2030, and the Green Deal environmental achievements regarding the EU transportation system.

The president of FERRMED, Joan Amorós, will present at SIL the key aspects of +FIRRST before stakeholders of the main sectors and organizations involved. The event will be attended by, among others, Xavier Flores, secretary general of infrastructures of the Spanish government; Isidre Gavín, secretary of territory and mobility of the Government of Catalonia; Ralf Charley Schultze, president of UIRR, the European Union that promotes intermodal transport; Godfried Smit, general secretary of the European Chargers board; Adam Talosi, general manager and board member of the Hungarian intermodal terminal EWG and Pierre Escodo, Eurofresh Editor. 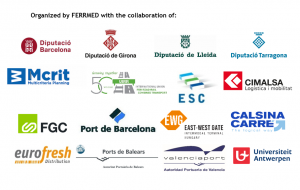