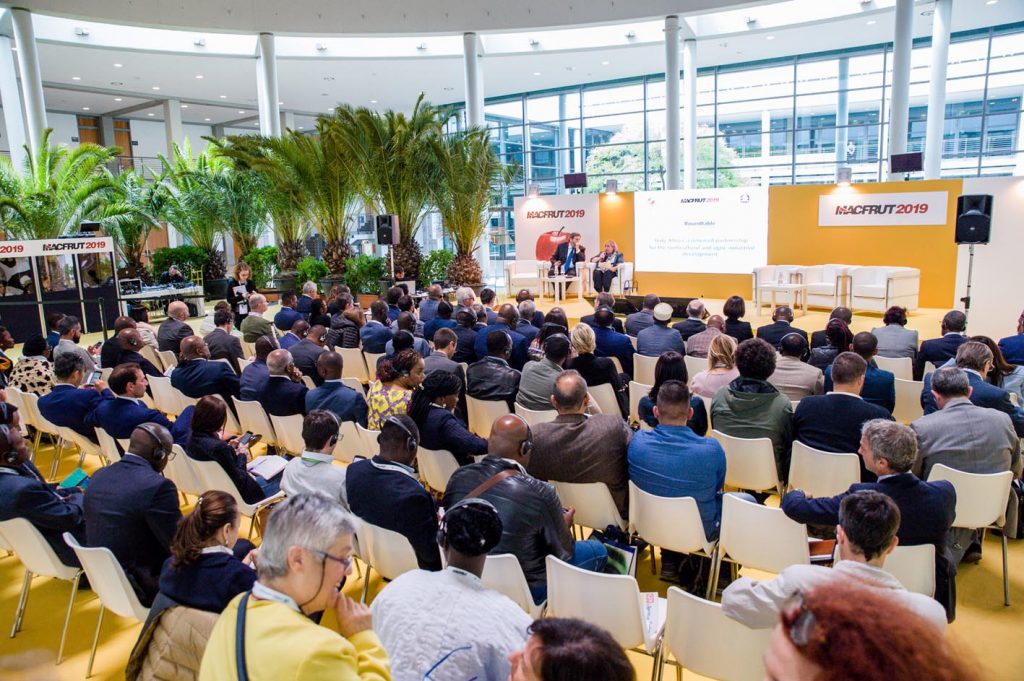 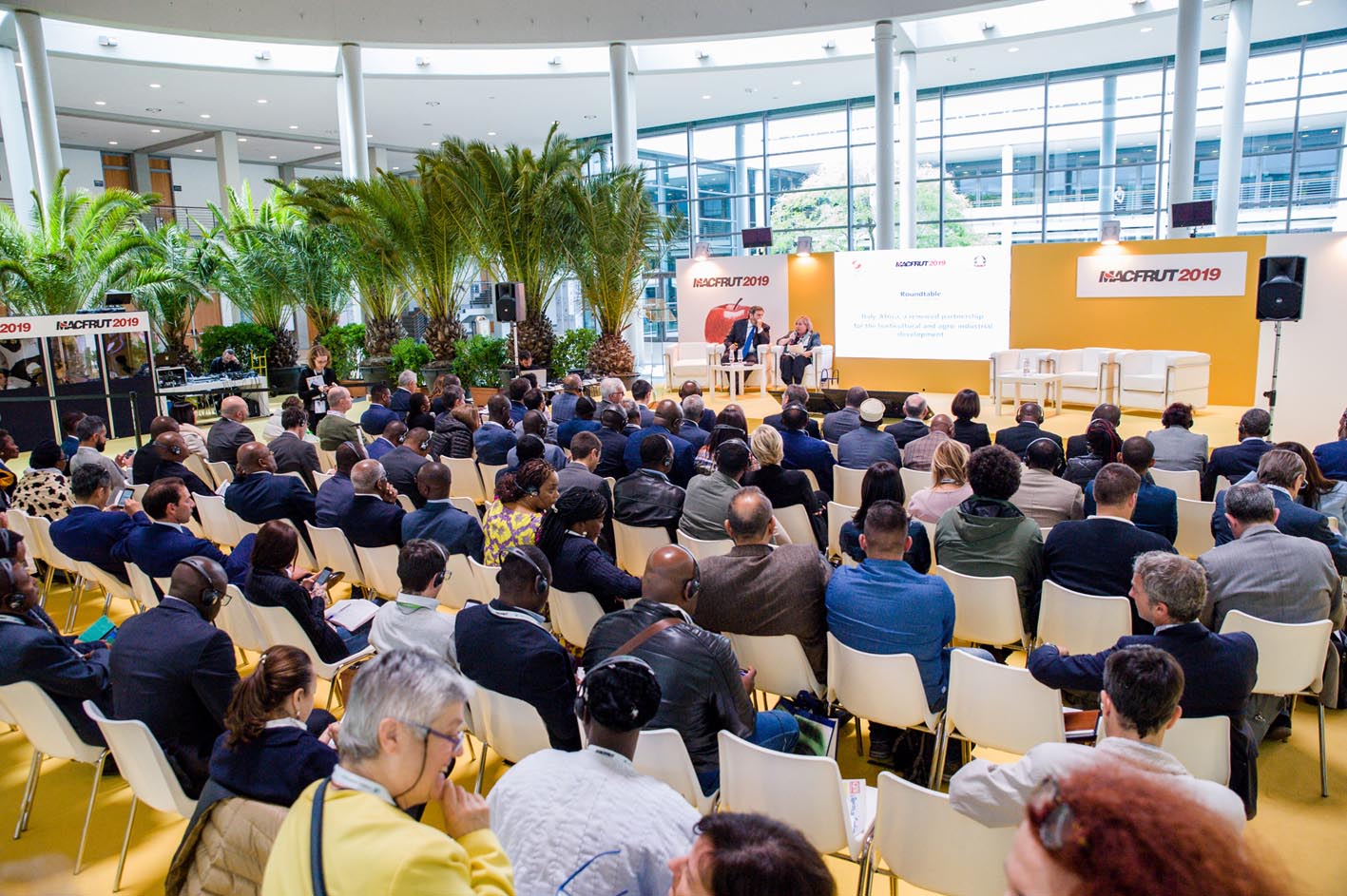 At the meeting about Italian-African partnerships, case histories and projects of the Democratic Republic of Congo, Ethiopia, Somalia, Mozambique and Angola.

“Italy-Africa: a Renewed Partnership for Horticultural and Agro-Industrial Development”. This was the theme of the round table held at Macfrut in Rimini, which brought together ministers and representatives of the African agricultural sector and Italian institutions involved in African cooperation and development.

Emanuela Del Re, Italy’s Deputy Minister of Foreign Affairs and International Cooperation, made an introductory address, highlighting Italy’s efforts to develop the skills of local workers through training (the only effective way of reducing the scourge of unemployment) and technology, and by introducing food safety criteria and transferring models for interconnecting agricultural supply chains. The potential advantages of the Italy-Africa partnership meet the need to address the continent’s growing population, which is expected to reach 4.7 billion by the end of the century. Huge expanses of arable land have not yet been exploited, so much so that only 30% are used: infrastructures need to be enhanced and new technologies and skills must be implemented, so that Africa can first meet its food demand and then supply other markets. As a leading country in the agro-industrial sector, Italy is the ideal partner in this process.

Thsibangu Kalala, Minister of Agriculture of the Democratic Republic of Congo, is aware of this and introduced the opening session entitled “Agriculture in Africa: Needs and Opportunities, Voices from the Continent”. ‘Agriculture has become a priority for the Congo,’ the Minister said. ‘We realised that the investments made in the mining sector did not bring the desired results and poverty is still widespread. Agriculture must be developed: we intend to support the credit system for the benefit of small and medium-sized businesses by investing resources from the mining sector in this sector, and by setting up a dedicated National Fund and introducing measures based on the European CAP model.’

A speech followed by Sani redi Ahmed, Ethiopia’s Deputy Minister of Agriculture. ‘In Ethiopia, agriculture is of paramount importance and accounts for 35% of the national GDP, but there is still huge potential for development. Our goal is to increase productivity in terms of quality by focusing on new technologies. This goal can be achieved by working in partnerships with leading-edge countries such as Italy, focusing on the context with a targeted and inclusive approach in order to improve productivity, trade and food safety, while reducing youth and female unemployment and, in doing so, poverty.’ It is a matter of incorporating specific and direct guidelines, aimed at defining an ambitious growth plan, which also includes creating agro-industrial parks. ‘With its 74 million hectares of arable land, Ethiopia has tremendous growth potential. We must be able to pursue an effective policy: the goal is to make Ethiopia become the cornerstone of industrialisation by 2025,’ stated Teka Gebreyesus Entehabu, Ethiophia’s Deputy Minister of Trade and Industry.

In Somalia, agriculture accounts for 70% of the national GDP and for 90% of exports. Today, local producers are increasingly inclined to invest in new technologies. ‘We are aware of the challenges posed by climate change that we will have to face in the near future and we are already taking measures to address them,’ said Ismail Dirie Gamadid, Somalia’s Minister of Agriculture.

Opportunities also abound for Mozambique, represented at the meeting by the Secretary General of the Ministry of Agriculture, Victor Domingos Canhemba Jr.: at present, only 15% of the 36 million hectares of arable land are used and biodiversity is potentially very high due to the physical conformation of the country, which is strategically located in terms of trade routes, also thanks to the presence of the port of Nacala, the third deepest port in East Africa. ‘This series of distinctive features makes Mozambique a particularly interesting country for potential partnerships.’

Finally, António Sozinho, Director General of Angola’s Ministry of Agriculture, took the floor. Angola is a country that has been committed to investing in agriculture since the oil crisis that severely affected its economy. ‘Today, our policy is driven by the desire to diversify in order to no longer depend on a single sector. In 2013, the Ministry of Finance announced that it would provide incentives to invest in agriculture, but issues related to the global crude oil economy and domestic policy issues have slowed down their implementation. We are now ready to start over in an effort to attract new investors who can make the most of our potential. The country is gradually resuming exports of its main products such as mangoes, bananas and pineapples, but there is still much to be done. Just think that only 5 out of 35 million hectares of arable land are cultivated.’ He then concluded, ‘Our priorities are investing in local and sustainable production as well as in technologies and new irrigation systems.’