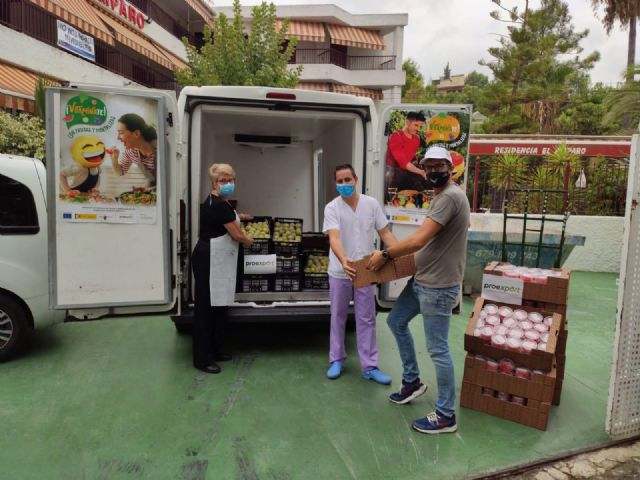 Various charities in Spain’s Murcia Region are benefiting from the donations of fruit and vegetables. Part of the Programme of Consumption of Fruits and Vegetables in Schools of the Region of Murcia, the food is allocated by the Ministry of Water, Agriculture and Environment to the Segura Food Bank in response to the difficulties caused by Covid-19 for educational centres as

In this project, which is funded by the European Union, the Government of Spain and the Region of Murcia and in which Proexport is an authorised distributor, a total of 422 schools and 92,055 Murcian students have participated during the 2019-2020 school year, 46% more of schoolchildren than in the previous edition.

Proexport is collaborating with the Food Bank in the distribution of vegetables throughout the month of September, through the weekly distribution of ready-to-eat plum and watermelon rations to entities that are in charge of caring for families with minors resources.

“Although the consequences of the pandemic have prevented us from reaching children directly with the fruit that we delivered to educational centres, we are grateful that the Ministry of Agriculture has decided to make this donation that, indirectly, will help those minors who, due to the situation economic of their families, they have more complicated the daily intake of these rations, they can also receive them,” said the head of the School Fruit Programme at Proexport, Natalia López Carrillo.

These amounts are added to those already donated during the month of March, when face-to-face classes were suspended and the State of Alarm was decreed. In total, the Segura Food Bank has distributed 31,443 kilos of fruits and vegetables, corresponding to 257,598 rations from the Murcia Region School Fruit Programme.

During the 2019-2020 school year, the distribution of 1,288,770 servings of various fruits and vegetables (apple, pear, banana, tomato, plum, apricot, nectarine, melon, orange, watermelon, celery and carrot) was expected, but due to the closure of schools due to the pandemic, only 515,705 rations could be distributed, so the Ministry of Agriculture opted to donate a substantial part of the products that could not be distributed to the Segura Food Bank.