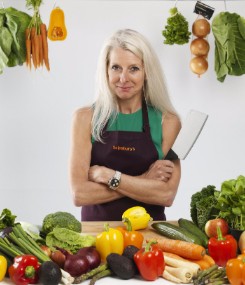 A new vegetable counter designed to show customers ways vegetables can be incorporated into everyday meals, and encourage them to make the most of their favourites from ‘root to tip’, is being trialled this week by Sainsbury’s in one of its superstores in London.

In a press release, the supermarket chain described the service as the UK’s first vegetable butcher, saying it was inspired by the rise in nose to tail eating and the expert knife skills found in traditional butchers.

“The Vegetable Butcher will allow customers to discover new ways to prepare classics such as carrots, broccoli and cucumbers whilst also inspiring them to try less familiar veg including beetroot and parsnip,” it said.

“The Vegetable Butcher will be using more than six different techniques to prepare veg including ribbon cut, spiralised, mandolin sliced, wave-cut and julienne. Customers can buy their favourite loose vegetables, then take them to the counter for a preparation of their choice (or to be inspired by a new way to cook and enjoy them) at no additional cost.”

The Vegetable Butcher will be fronted by Amber Locke, who said she has been trying to use vegetables in exciting and inspiring ways for years. “I have a passion for showing people how fun and delicious vegetables can be and, more importantly, how you can avoid wasting parts of them that may seem unusable.”

Sainsbury’s said British shoppers (62%) are now buying a larger variety of vegetables than they did five years ago – due to understanding more about the health benefits of different vegetables (44%) and being more likely to consider vegetables as the main part of a meal (28%).

“Over 20% are even inspired by chefs and restaurants serving interesting vegetable dishes that they want to recreate at home. Of those who have bought at least one new variety of vegetable this year, sweet potato (40%), kale (36%), avocado (19%) and asparagus (19%) top their choices.”

“While Sainsbury’s is already leading the way with innovative products such as “Courgetti”  (courgette spaghetti) and “Boodles” (butternut squash noodles) – made primarily from vegetables that would otherwise be wasted – there is still a way to go in the fight against food waste. As part of her role as The Vegetable Butcher, Amber will demonstrate easy ways to use the whole vegetable – from grating to roasting and juicing.”

“The innovative new products we’ve recently introduced to the prepared vegetable category, such as courgetti and beetroot rice, have been really popular, so we love the idea of an in-store Vegetable Butcher, to build on this success and hope it will be well-received by our shoppers too,” she said.

The veg counter is operating on a trial basis until tomorrow (Saturday June 18), in Sainsbury’s Wandsworth superstore in South West London.

Sainsbury’s said vegetables are becoming more central to British eating with over two thirds (68%)* of households now enjoying at least one vegetarian meal a week – even if they are meat eaters.

“Families are also increasingly replacing carbohydrates with on-trend vegetable alternatives, with new Sainsbury’s products “courgetti” and “boodles” exceeding expectations by selling an average of nearly 30,000 units per week since their launch in January 2016.”

The retailers said it has seen the following year-on-year surge in its vegetable sales: