The EU 2019/20 lemon crop is forecast to plummet by 16% from last season to 1.4 million tons, according to MAPA data, due to a ravaged season in main producer Spain. Total planted area continues to expand, and has grown 8% since 2011. Spain is the world’s second largest lemon producer, after Argentina, and the number-one exporter for fresh consumption. The main Spanish lemon varieties are Fino (70%) and Verna (30%), with the Fino variety predominantly used for processing. During the first 16 weeks of 2020, the average price for Spanish lemons peaked at €0.98/kg as the smaller supply and higher demand drove up prices. The average lemon price paid to Spanish growers peaked at €0.43/kg.

EU lemon consumption is expected to fall in line with the smaller crop. Per capita lemon consumption stands at 3 kg for the region. According to industry sources, Spain has become the second global producer of processed lemons. The EU is a net importer of lemons, and imported volumes are expected to grow in 2019/20 in response to the smaller EU crop. In 2018/19, the volume of lemon imports dropped by 10% in 2018/19 to 548,348 tons due to the larger crop that season. In value terms, EU lemon imports shrunk by 29% to US$575 million from 2017/18. The main suppliers to the EU are Argentina, South Africa, Turkey, and Brazil. 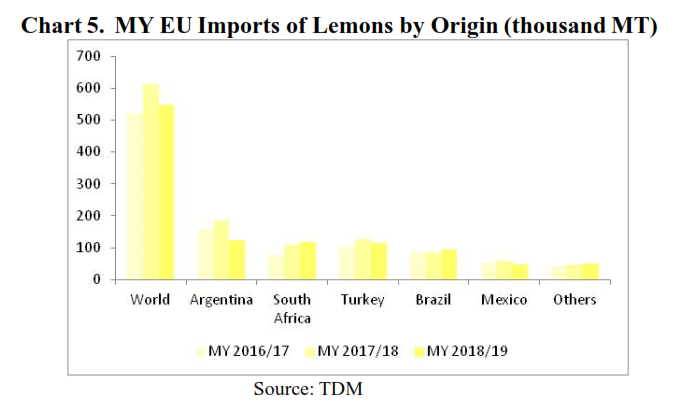