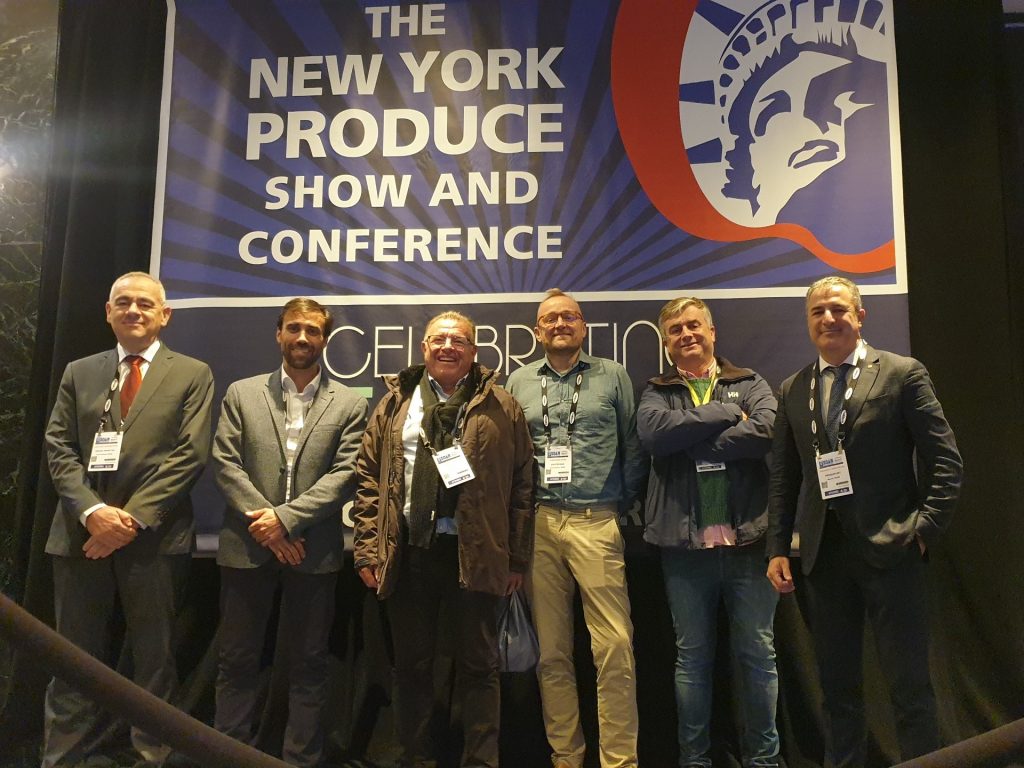 A delegation of Proexport (Association of Producers-Exporters of Fruit and Vegetables from Murcia) companies from Spain visited the New York Produce Show last month to hold meetings with importers and officials from the US Department of Agriculture and the Spanish Embassy in Washington. Proexport’s main priority is to secure the opening of the market for Spanish fruits and vegetables. Specifically, its main objective is the East Coast of the American country, since it is the most populated coastal area in the United States and with viable transport and distribution logistics for perishable fresh products shipped from Europe. In 2020, the population of its component states was estimated at 120 million (36% of the country’s total population of 332 million).

New York City is the largest city and metropolitan area on the East Coast. That is why last week a delegation of companies associated with Proexport visited The New York Produce Show and Conference and held meetings with importers, distributors and officials from the US Department of Agriculture and the Spanish Embassy in Washington.

The commercial mission had a markedly exploratory character of the market, and was led by the vice-president of the Association, Juan López, and by its general director, Fernando Gómez.

As López said, “Our visit to the US is part of an attempt to arouse the interest of American producers and importers and to approximate positions with their Administration, to promote the opening of their market to our vegetable and EU productions. At Proexport we believe that the current situation of food instability and tension in the global supply chain could be moderated if trade agreements between the two blocks improve.”

The companies that participated in this initiative were Agrícola Santa Eulalia S.L., Grupo Hortofrutícola Paloma S.A., Pascual Marketing SL, Pozosur S.L., Grupo G’s Spain, and Proexport itself. The trade mission was subsidized by the Autonomous Community of the Region of Murcia, through the Ministry of Water, Agriculture, Livestock, Fisheries and the Environment.

The United States is by far the world’s largest importer of fresh fruits and vegetables, surpassing the amount of 20 million tons and 26,000 million dollars in 2020, followed by Germany (9 million tons), Russia (7 million tons) and China (6 million tons).

In 2021 Spain exported only 32,993 tons of fruit and vegetables to the United States and for 10 years it has remained below 60,000 tons. For Fernando Gómez “this is a rather ridiculous figure for such a large market. Many European horticultural products are still closed to bilateral trade due to the fact that they are subject to high tariffs, or because they have not developed a phytosanitary protocol approved by both parties. We invite you to move forward together.”

Mexico is the main country that is benefiting from the growing US demand for fruits and vegetables and its share reaches two thirds of the total imported. Peru and Chile are also big beneficiaries, helped by a preferential tariff treatment with the US.

Proexport has been collaborating for 4 years with the Spanish Government to obtain from the United States the next approval of a phytosanitary protocol that allows the introduction of peppers from the Region of Murcia. It has also demanded the opening of the American market for broccoli and artichokes, given the interest shown by various American importers. Lastly, in recent years, Proexport, together with the food processing industry, has contributed to the reduction of tariffs for the export of processed artichokes and peppers.