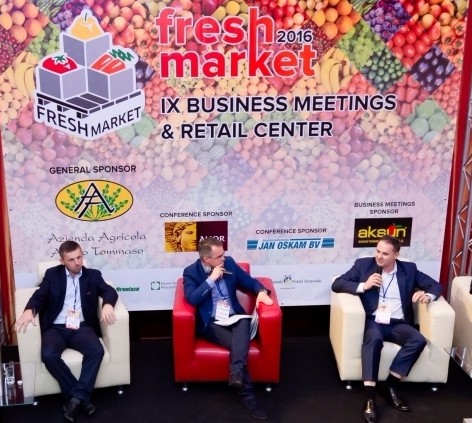 This year’s Fresh Market Conference and Fruit Expo were held on September 23 at the Mazurkas Hotel in Ożarów Mazowiecki.

For many Polish vegetable and fruits producers it was their big opportunity of the year to establish business contacts in person with Poland’s top retail chains and to find clients from 15 other countries.

The conference provides a platform for the biggest and most dynamic fresh produce companies from Poland and abroad to present their offerings, attract trade partners and establish lasting business relations.

It brought together in one place representatives of the biggest retail chains from Poland, Russia and Belarus, such as Biedronka, Tesco, Carrefour, Intermarche, Selgros, Makro, Piotr & Paweł and Marcpol.

The event’s matchmakers helped attendees connect with the most appropriate people and companies present.

And a series of lively panel discussions featuring fruit and vegetable sector experts, including representatives of fresh produce group and leaders from wholesale markets, provided further opportunities to make contacts and exchange information and views, such as on the current trade situation, prices and forecasts for coming months and next season.

Lachowicz said a solution for Polish apple growers and exporters is to focus on the production of varieties that appeal to and will be bought by customers worldwide, a move requiring some restructure in Polish orchards.

Boguta said given the very low apples price at the moment, Polish growers do not have the financial means to increase their commercial activity.

Lachowicz argued for Polish fruit growers to unite in bigger organisations. In his opinion, such commercial organisations can not only provide representation for their members but have more clout in negotiations in foreign markets.

In a separate panel, the discussion focused on the permanent impact of the Russian embargo on imports of Polish vegetables.

Panelist Michał Groblewski, from the fruit and vegetable producer association Cuiavia, said the way forward is, with support of government agencies, to increase the promotion of Polish vegetables as much as possible in other markets around the globe.

Mirosław Łuska, from the association representing Polish pepper producers, said the fact that Poland’s pepper growers do not present a united front in foreign markets makes it harder to achieve export efficiency. However, while the Russian embargo has also taken its toll on Poland’s pepper growers, they have found new sale channels in different countries and even on other continents.

Farmgate sales of organic produce to take off in Poland

A third panel discussed the situation and outlook for organic fruit and vegetables in Poland and worldwide.

Urszula Sołtysiak from the company Agro Bio Test said there has been a big rise in the production and sale of organic products, especially fresh produce, and this is likely to be an enduring consumer trend.

Dorota Metera from the Bio Ekspert company said retail chains now sell much more organic produce than they did 3-4 years ago. Many supermarkets in Poland today have vast sections dedicated to organic products and their ‘eco’ stands are often surrounded by customers who value the health benefits of organic produce.

There was also discussion of the use of other sales channels – such as e-commerce – for organic produce.

Another channel involves direct sales by the growers themselves. Panelists said this farm-direct method is expected to take off in Polish villages when new rules come into effect on January 1 that allow organic farmers to sell their fresh produce without being hampered by red tape.