Add
Company news
The demand for organic products in Europe is growing, exports are increasing while the Italian market is the most static.
Tue 25/01/2022 by Made in Nature 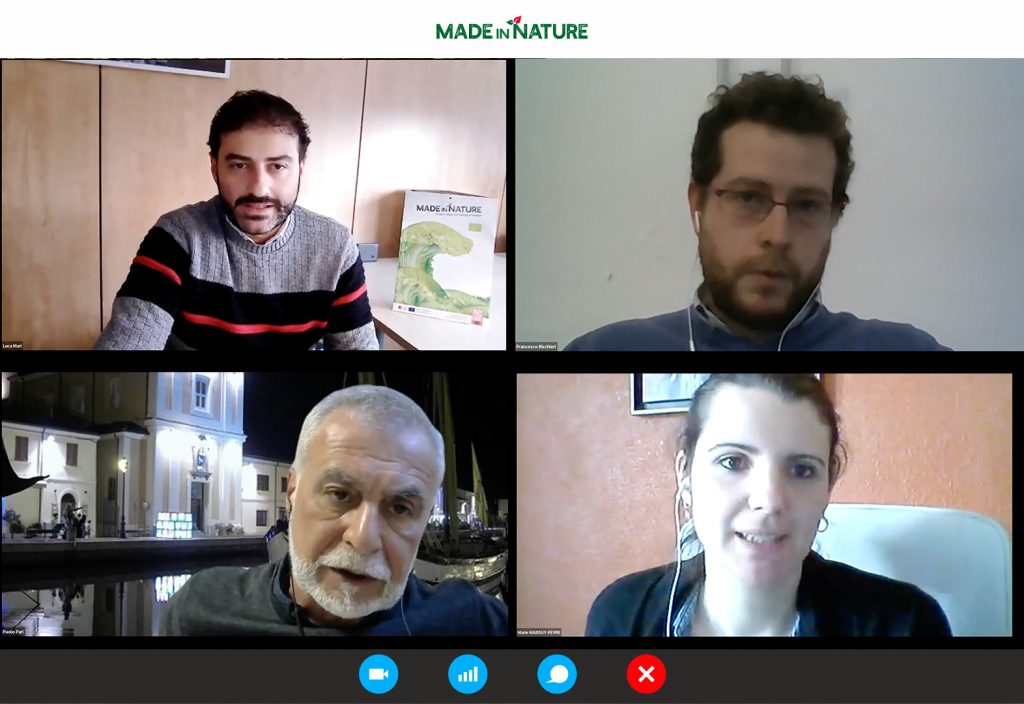 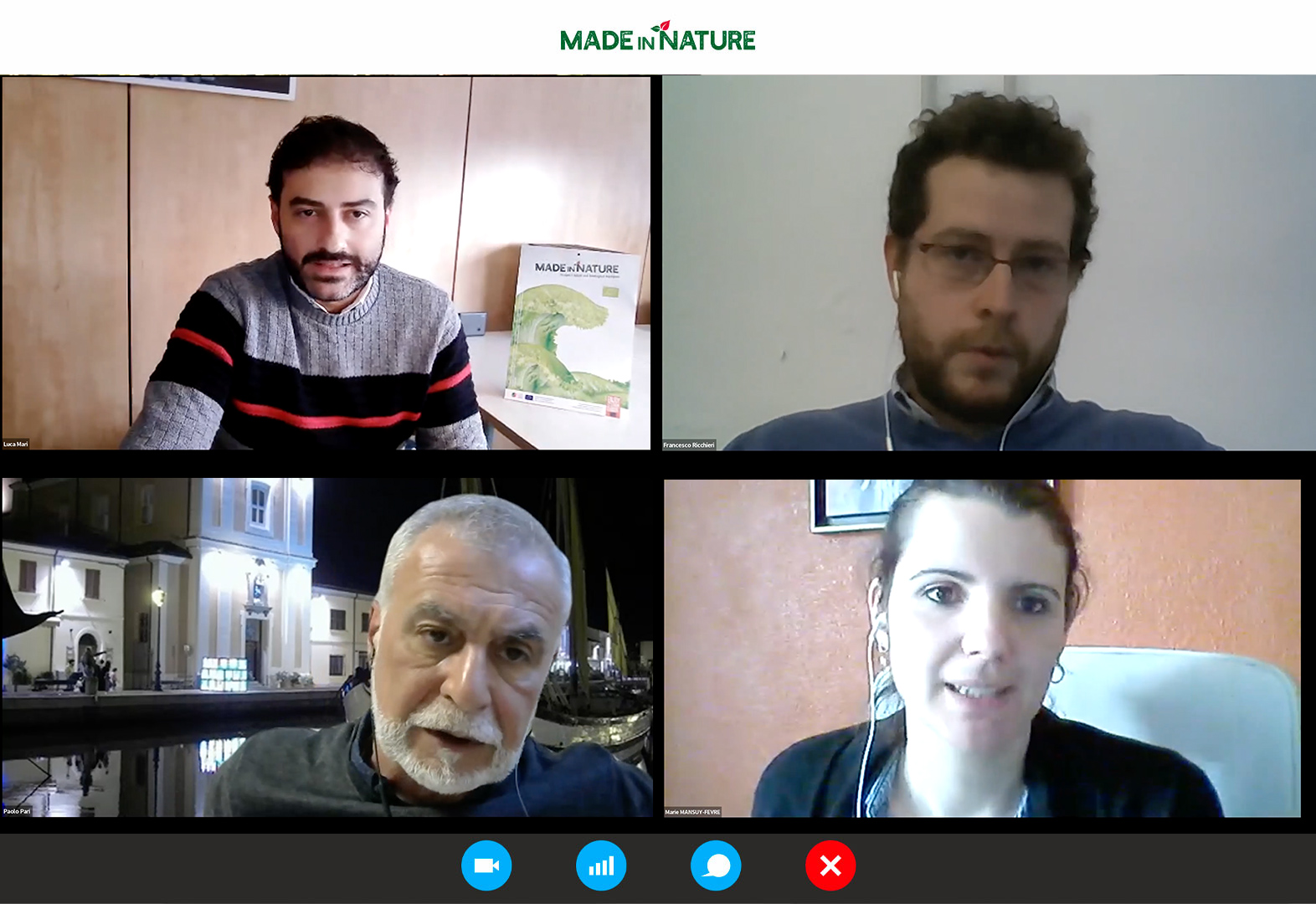 Bologna, January 25, 2022.- During the webinar organized by Made in Nature, the project funded by the European Union and CSO Italy to promote the consumption of organic products in Italy, France and Germany the representative of Italian leading companies spoke about the current state of Italian and European organic products and their future prospects. The webinar host were Luca Mari (CSO Italy, Made in Nature Project Manager), Luca Zocca (Brio Marketing Manager), Paolo Pari (Director of Almaverde Bio), Francesco Ricchieri (commercial manager of Veritas Biofrutta) and Marie Mansuy-Fèvre (Conserve Italia Development Manager in France).

The encouraging numbers of organic products highlight the importance of promoting the values ​​of this type of production. According to FIBL data, the market share of organic over conventional is in progressive and constant growth. Denmark (Source Fibl 2021) is the European leader in this figure with 12.1% share, followed by Switzerland, Austria, Sweden and Luxembourg, France, Germany and the Netherlands.

As confirmed by Luca Mari, Project manager of CSO Italy: “The importance of projects such as Made in Nature are demonstrated by the results in terms of useful contacts achieved thanks to the activities implemented which were certainly limited by the pandemic but which nevertheless highlighted the great interest of European consumers in organic farming», Mari continues, «through the social networks and the website, Made in Nature has reached over 60 thousand estimated contacts, 27 million impressions through ADV campaigns. The actions at the point of sale involved consumers with over 1650 promotional days in France alone, 8 thousand days in Germany and 1500 in Italy ».

After the exploit of 2020 (which marked + 4.4% in consumption and over 3.3 billion euros on the entire segment, ISMEA 2020) organic continues to grow throughout Europe, driven by the European Union campaigns such as From Farm to Fork and, above all, a focus on natural well-being and environmental protection that is increasingly widespread among consumers. In fact, in the Italian sector alone, the data of Nomisma-Sana 2021, marks a + 5% of consumption compared to 2020, with a total value of 4.6 billion in sales. In this, a fundamental role is played by large-scale distribution (value equal to 1.4 billion euros), which is also associated with the Discount channel and the stable growth of e-commerce. Fresh fruit and vegetables in these segments recorded a +5%, as confirmed by Luca Zocca, Marketing Manager of Brio, Alce Nero:

«Growth is constant, even in this moment, in which we are witnessing a generalized one stagnation of consumption in Italy. Organic holds and, as we have directly verified consumer interest is lively. In 2021, we recorded growth of 5 to 10% in value with exports accounting for 50% of the entire sales volume. We have carried out numerous promotional initiatives with the Made in Nature project, especially in Germany where even in recent days we have involved 100 points of sale with our branded kiwi. One of the elements that I believe to be winning at the moment is the possibility of communicating the difference that is made with organic. I am thinking for example of our made in Italy avocado. A highly requested product that, if coming from Italy, has even stronger positive connotations».

These data are also confirmed by Paolo Pari, Director of Almaverde Bio, highlighting an overall positive data on organic sales in the first month of 2022: «2021», Pari declared during the webinar, «saw a lively trend in consumption but not disruptive as in 2020. We have had really very performing products such as kiwis, apples and citrus fruits for the winter season and all summer fruit. Growth in demand for vegetables is also important, especially on foreign markets. For fruit which, despite the economic difficulties and above all the production difficulties encountered in this last year, organic keeps growing. We recorded a growth in value of + 10% in 2021. There is still a need for more communication because it is necessary to increase the value perception behind organic products in terms of production methods, ethical and environmental value».

The growth trend of organic products can be found to an important extent in the export of Italian products which on international markets reached 2.91 billion euros in 2021 with + 11% compared to 2020. Francesco Ricchieri, sales manager of Veritas Biofrutta talks about it: «The markets are once again very receptive, starting with the German, Austrian and French ones (especially the large-scale retail trade), which represent a fundamental outlet for us. Especially for products such as crucifers, fennel, artichokes and carrots, these markets absorb 50 to 80% of our production».

«The current campaign», Ricchieri concludes, «will be remembered as one of the most complex ever. The logistical and operational problems related to Covid, combined with inclement weather and the exponential increase in the costs of raw materials and energy, are putting a strain on the cohesion of the supply chain. We, as Veritas Biofrutta, are doing everything to ensure the high level of service that our customers expect, certainly not without some difficulties».

Today organic exports represent 6% of the Italian total and demonstrates the importance and appreciation for this type of product, placing it in all respects within the excellence of the national agri-food sector. Thanks to these numbers, Italy, today, is also the second largest exporter of organic products in the world, immediately after the USA and before Spain, China and France.

«In the same way of Italy also French organic has had a very important growth, also in the sector of processed fruit and vegetable, which we produce as Valfrutta Bio both in Italy and in France, with a growth of + 30% in volumes and +29 % market values ​​in 2020», declares Marie Mansuy-Fèvre, Development Manager of Conserve Italia in France, «Green beans and peas are the most relevant in this growth but also all the other references have seen a good increase thanks to the presence both in retailers classic as well as those specialized in organic, in which we have carried out the Made in Nature activities, allowing us to continue to make ourselves known on the French market».

Made in Nature – Discover the values ​​of European organic, concludes its promotional activities for the first three years on January 31 2021 but has been refinanced by the European Union to continue promoting European organic in Italy, France, Germany and Denmark with the fresh and organic processed product from leading Italian production companies such as Brio, Canova, Conserve Italia and Veritas Biofrutta.

The webinar video is available for viewing here https://bit.ly/3IzguJ9