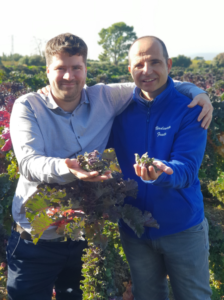 Kalettes®, the natural hybrid between Brussels sprouts and kale, arrives for the second consecutive year in Spanish supermarkets. Following its success in north and central Europe, this ‘supervegetable’ developed by Tozer Seeds and produced in Spain by Verdcamp Fruits, is now available in Carrefour stores.

This season will see a doubling in volumes from last season.

“Last year, we reached 20 tons and this year we will be at 40 tons, from five hectares planted. Bearing in mind that the sales format will be 150g, we plan to reach approximately 265,000 sales units,” said Pep Barrabeig, CEO of Verdcamp Fruits.

Available in the Northern Hemisphere between November and April, this vegetable has become popular among consumers due to its great healthy properties. Kalettes® contain vitamins C, K and B6 from kale and calcium, potassium, phosphorus, magnesium and sodium from Brussels sprouts. Kalettes® can be consumed both raw, sautéed and microwaved.

Kalettes® are already marketed in over 20 countries around the world and sold in more than 70 supermarket chains.