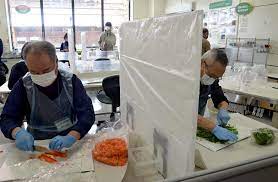 A report in Japan has found that almost all of the 17 prefectures required to test food products for radiation due to the March 2011 Fukushima nuclear accident are also testing items not listed in the guidelines. Also, 11 prefectures not required to perform radiation tests are doing so on their own initiative. The prefectures are testing vegetables and other items not listed in government guidelines, intent on dispelling concerns among domestic and overseas consumers, though it is extremely rare for these products’ radiation levels to exceed the national standard.

The areas and items to be inspected for radioactive levels in food are determined by the guidelines of the government’s Nuclear Emergency Response Headquarters. The-japan-news.com reports that, according to the Health, Labour and Welfare Ministry, 54,412 items were tested nationwide, whether required or voluntary, in fiscal 2020, and 127 items, or 0.23%, were found to exceed the national standard. One of the 127 was from an unknown place of origin. The remaining 126 items were subject to inspection as stipulated in the national guidelines.