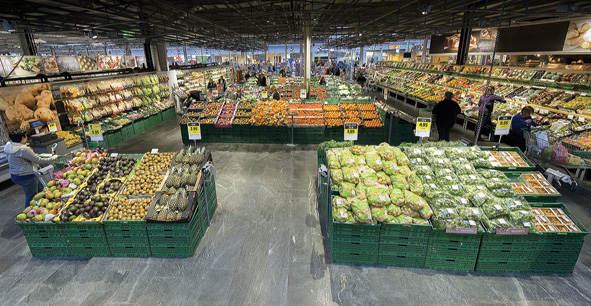 ‘Buono e Giusto’ is the new project by Italy’s largest retail group, comprising 1,087 supermarkets, 102 hypermarkets and 1,189 other points of sale.

The present-day heir to the Italian tradition of consumer cooperatives, which dates back to 1854, Coop Italia combines the efficiency and vastness of the commercial offerings of the main private volume distribution chains with the typical cooperative values of solidarity, mutuality and participation, subjecting all the main company policy decisions to the general assembly of members.

Founded by a consumers’ cooperative Since it was founded, Coop’s pillars have been based on it being a cooperative made up of Italian consumer members, where 85% of its items are fruit and vegetables from Italy. For this reason, the guidelines for the business decisions taken by Coop—the number one retail chain in Italy—are based on consumer awareness.

According to the fresh produce procurement head, Germano Fabiani, a significant shift is being seen in Italian consumers’ purchasing decisions. They are ever more well-informed, leading to proposals being favoured that show good agricultural practices and more solidarity in agriculture.

Towards a healthy, honest and fair economy

For this reason, Coop Italia has launched a campaign it calls ‘buono e giusto’ (good and fair) in order to confirm the suppliers’ honesty and legality. Fabiani explains:

“We have a sincere desire and will to generate a healthy, honest and fair economy. We seek to modernise the value chain and make it more efficient. We would also like the fruit we sell to be truly good in all senses. On the one hand, ‘buono’ means high quality fruit and suitable food safety. On the other, ‘giusto’ means that the process to obtain it is appropriate in social, labour and legal terms.”

To achieve this, Coop has increased field inspections, which are carried out directly at the source in collaboration with the Italian Ministry of Agricultural Policies. There, the quality of the fruit is controlled as well as the working conditions of their employees. This examination is applied not only for the farmers in Italy, but also for the banana and pineapple suppliers in Central America.

This is an excerpt from an article that appeared on page 24 of edition 145 (Sep-Oct 2016) of Eurofresh Distribution magazine. You can read that issue online here:
www.eurofresh-distribution.com/magazine/145-2016-sepoct