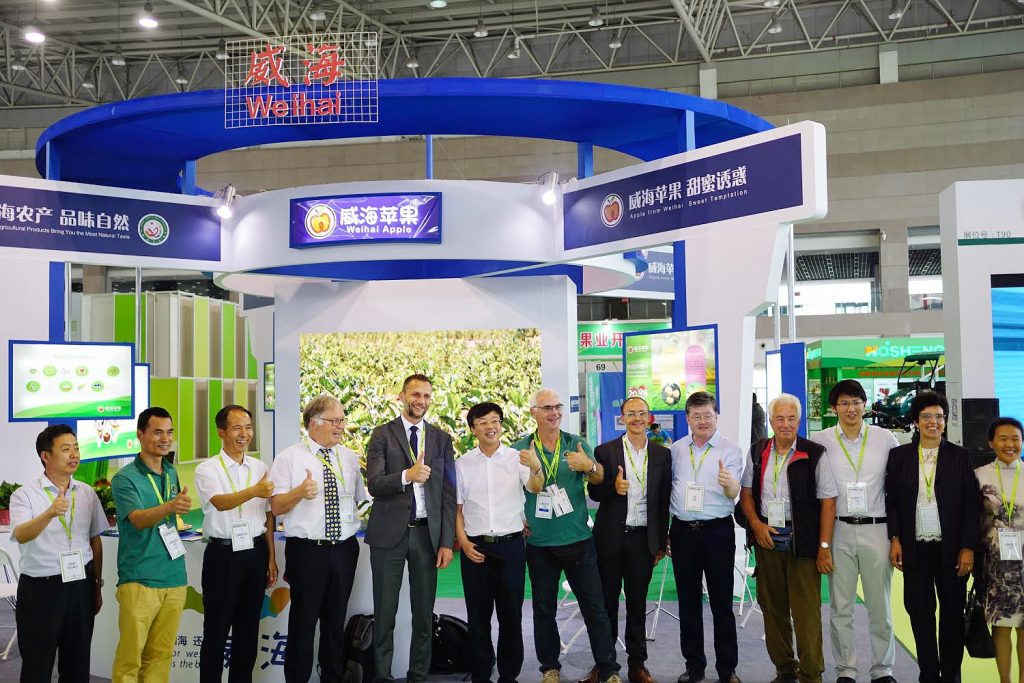 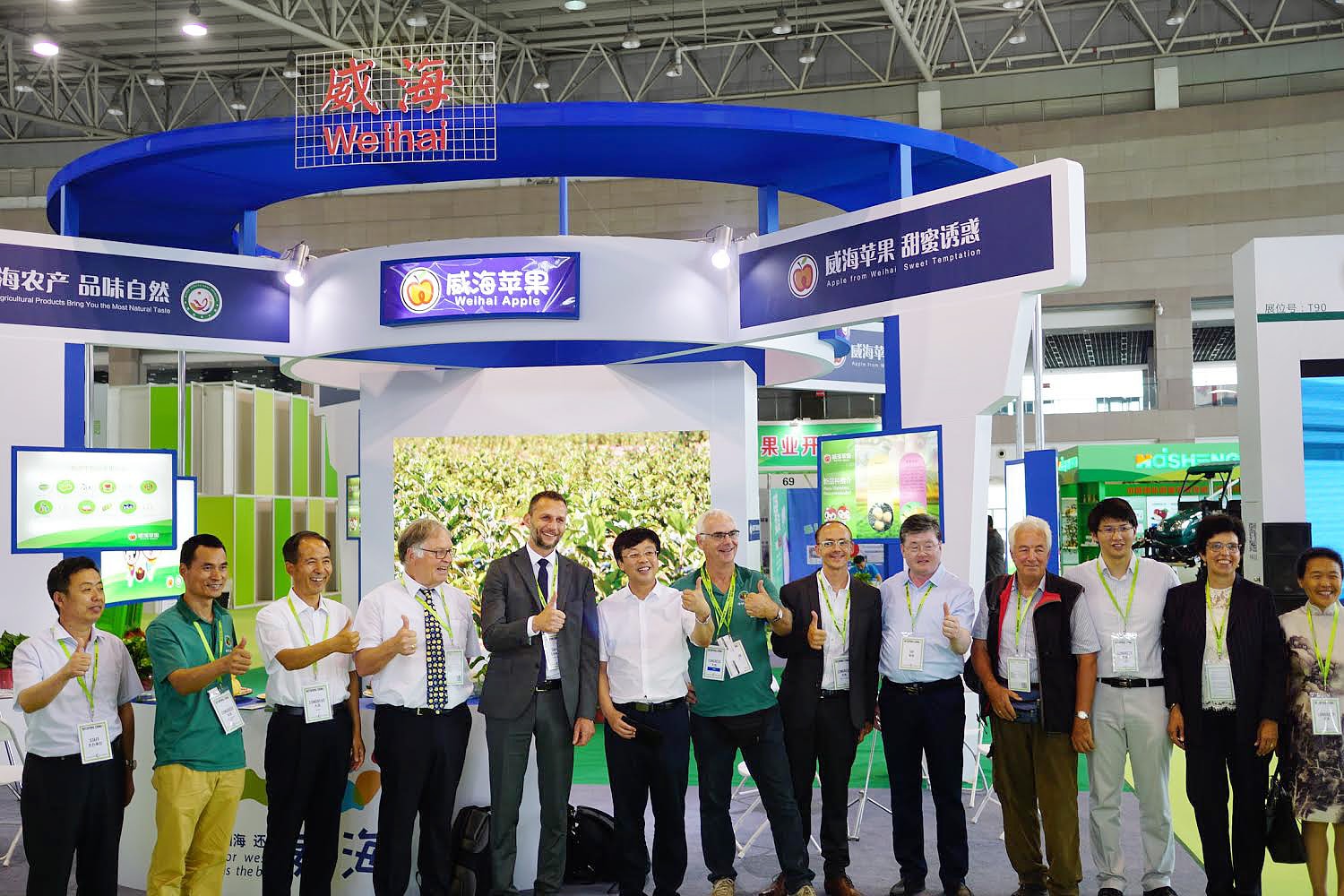 The 2nd INTERPOMA CHINA International Congress & Exhibition was successfully held from June 28-29, 2018  in Weihai, Shandong Province. During the two trade show days, 1000 professionals, including researchers, experts and renowned companies, visited Interpoma China, and 650 delegates participated in the Congress, which featured a series of speakers from China and overseas on the topics of apple cultivation, storage and marketing. Two tours have been organized to showcase the fast development of modern orchards in Weihai with the support of the local government authorities.

Weihai, Shandong Province, China, July 4, 2018 — The INTERPOMA CHINA 2018 International Congress & Exhibition is concluded, marking the second successful China edition of the event organized by Fiera Bolzano in cooperation with Messe München Shanghai. The two-day event attracted 1,000 professional apple industry expo visitors from China and around the world, who were eager to participate in the modernization and globalization of China’s apple industry. The Congress garnered 650 attendees which discussed the latest growing techniques and technologies, while industry leaders from China introduced the state of the Chinese industry. The learning and networking experience gained an extra boost from two orchard tours, which were appreciated from both Chinese and international attendees.

“This is the professional show for the apple industry, so we really consider it a must-attend event,” said Mr. CHEN Yongchun, General Manager of Fruitong Science and Technology (FRT), an exhibitor at the show specializing in climate-controlled warehouses. “Plus, the quality of the Congress is very good. We will definitely exhibit again at next year’s INTERPOMA CHINA in Shanghai.”

This year’s INTERPOMA CHINA placed an emphasis on new machineries, equipment and tools that can be employed in China’s cultivation of apples, which visitors got the opportunity to better understand through conversation with the 30 companies from Italy, Belgium, the Netherlands and China who were exhibiting their products and services. The exhibitors which already participated in at last year’s inaugural INTERPOMA CHINA, were happy with the second edition.

“We generated some good business from exhibiting at the first show last year,” says Mr. LIU Linxuan, Sales Director of Haisheng Nursery. “This year we met with some more potential customers and we’ll follow up with them after the show. We’ve already signed up for next year’s INTERPOMA CHINA.”

With the main topic “China and the Apple in the World,” the INTERPOMA CHINA International Congress was praised by its 650 participants. The international Interpoma experts comittee recruited top speakers covering a wide spectrum of the topics. These ranged from highlighting the latest cutting-edge international modern growing techniques, such as fertilizer management, pest and disease management and cold storage, to an in-depth look at the current state of China production and retail market. Günther Mahlknecht of GRIBA Nursery in Terlano, Italy presented the topic “The Knip-Boom Production in Nursery,” while Li Baohua, a Professor at Qingdao Agricultural University talked about “The current situation, problems and solution of apple pest management in China.”

To sum it up, INTERPOMA CHINA International Congress attendees walked away with a heightened understanding of both global best practices and the status of the Chinese industry. They also learned that, despite strong modernization of orchards in the area around Weihai (China’s leading apple producing region), China has an urgent need for even further modernization of cultivation across the country so as to meet market demand amidst labor shortages and rising costs. Thomas Mur, Managing Director of Fiera Bolzano Exhibition Center, commented: “We chose the right topics for the Congress, and as a result we have received positive feedback from the attendees. Like at Interpoma Bolzano, to be held from November 15 to 17 this year, we will make no compromise on the quality of the Congress. Our mission is to be a premium networking platform for the cultivation, storage and marketing of apples by creating value for exhibitors and visitors alike.”

This is good news for international exhibitors at INTERPOMA CHINA looking for new customers, as well as for Chinese growers in attendance who are looking to modernize their orchards, but need the right technologies and equipment to do so. Both sides gained a greater understanding of the situation in China through INTERPOMA CHINA’s orchard tours. This year’s tours showcased both traditional and modern orchards, including leading companies such as Yingjuyuan, Xinyuan, Yueduo and 51 Farm.  Participants saw that even modern orchards that have developed for just two or three years have made significant progress. This deomstrated that modern cultivation will be the future trend in China’s apple industry and poses business opportunities for both the international players and the local growers who will reap the economic benefit from upgrading their orchards.

INTERPOMA CHINA has built a solid foundation in Shandong, one of the most innovative provinces in China for apple technologies. The next stop of INTERPOMA CHINA will be Shanghai, held together with FRESH LOGISTICS ASIA, organized by Messe München Shanghai from April 15-17, 2019 in Shanghai. Companies interested in participating and reaping the benefits of the modernization of China’s apple industry are encouraged to register now to exhibit in Shanghai next year at INTERPOMA CHINA 2019.

Kees Biemans, General Manager of Verbeek said: “The chinese market is huge and is developing every year. It will take a few years that the chinese growers realize the importance of the good quality of trees and of the good technical support, like 25 years ago in Europe. Like the global edition of Interpoma in Bolzano, we need a specialized exhibition and meeting point in China as well”.

“The Chinese market for this type of machinery is still immature, but there is demand. We want to be here and we think that in the next four or five years there will be a good development of this sector and it would be a pity to lose this train. Interpoma is an opportunity to be present and to let people know about our products. Shanghai is an important location and all the companies and even the big owners of orchards see this city as a very important meeting point for their activities, including the cultivation part”.