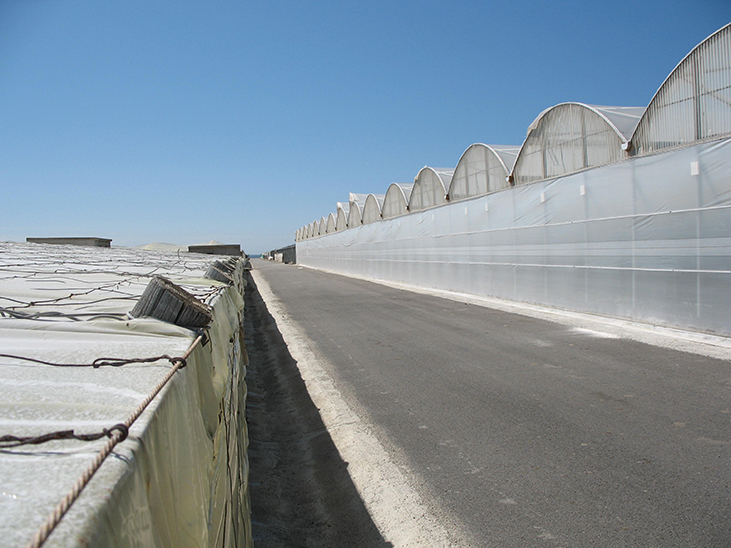 Thanks to the greenhouse crops of the Spanish southeast, which occupy an agricultural area of ​​35,000 hectares distributed between Almería and Granada, 60% of the European population can consume fresh, healthy and natural fruits and vegetables at any time of the year, even in the winter months when low temperatures prevent continental production.

The coast of Almería and Granada has an average of more than 3,000 hours of sunshine a year. This, together with the use of plastics that cover crops, has allowed this area to go from having subsistence agriculture to being the most advanced and productive system in the world. In fact, in 2017, the UN chose Almería and Granada as the best example of sustainability to feed the world – a system that is nourished solely by sunlight.

Often, when we talk about solar greenhouses in southern Spain, we tend to make the mistake of thinking that they work thanks to the photovoltaic energy produced by solar panels, but this idea is nothing more than a misunderstanding, since it is solar panels that transform solar energy into photovoltaic energy, while in solar greenhouses, sunlight is transformed directly on the leaves of plants into “photonutritive” and “photoshealthy” energy. Photovoltaic energy is transformed, for practical purposes, into electricity; while the “photonutritional” and “photoshealthy” energy is transformed into vitamins, minerals, antioxidants, fibre and water, that manifest in the form of delicious fresh fruits and vegetables.

“In solar greenhouses, the sun’s rays hit the plastic covers, letting the necessary light pass through so that the plants can carry out photosynthesis, absorbing CO2 from the air and transforming it into rich and healthy nutrients. In this process huge amounts of oxygen are released into the atmosphere.”

In this way, 96% of the energy used in the solar greenhouses in Almería and Granada comes solely from the sun, without the need to use other sources of energy or fossil fuels. This model is notably different from the production methods of other wintering areas, where artificial heating and lighting systems based on fossil fuels are used, which entail up to 30% more energy consumption, plus the consequent polluting effect.

Sun and plastic have made it possible to give the ideal conditions for the growth of plants, protecting them not only from inclement weather or pests but also taking advantage of the resources of light, temperature and humidity.

The plastic covers used in apparently very simple solar greenhouses are, however, the fruit of many years of research and innovation. Today the plastic sheet of the roof of solar greenhouses is made up of several layers with different additives that give it very interesting properties for cultivation.

Thus, the outer layer contains agents that block the entry of part of the ultraviolet light that is not necessary for plants and that, in addition, makes it difficult for many insect pests to enter, since they need this wavelength to be able to see. On the other hand, the internal layers prevent the heat accumulated by the ground during the day from escaping at night. In addition, these layers include compounds that hinder the proliferation of some fungi and the excessive condensation of water in conditions of high humidity.

The covers are replaced every three years and due to their high recyclability they are collected by specialised companies to be reused. They are normally used in the manufacture of garbage containers or urban furniture, wastebaskets, banks, etc.

Greenhouses in the southeast of Spain are fed exclusively by sunlight, with the help of natural ventilation and the roof bleaching technique as climate control systems. Natural ventilation allows control of temperature, humidity and CO2 concentration inside the greenhouse, while whitening the cover reduces the amount of solar radiation that is transmitted inside the greenhouse during times of higher insolation, which allows crops carry out their photosynthetic activity and, in addition, provides the energy that heats plants, soil and air. This absolutely sustainable and natural system guarantees healthy, tasty, high-quality, variety and fresh products throughout the year.