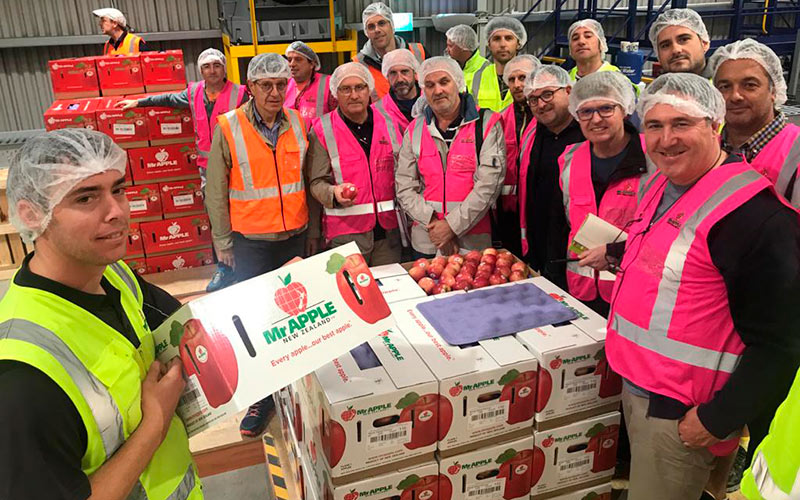 Apple producers from Girona (Spain) were in New Zealand from February 23 to 29 as part of a joint project for the production of fruits in hot climates. The producers of the PGI Poma de Girona visited Hawke’s Bay, in the northeast of New Zealand, to learn about new techniques and new systems of apple production. The expedition consisted of 19 members -among producers, technicians and managers- of the three companies that produce and market the Protected Geographical Indication (PGI) Poma de Girona (Girona Fruits, de Bordils, Giropoma Costa Brava, de Ullà, and Frutícola Empordà , from Sant Pere Pescador).

“Every year we organise technical trips and this time we have chosen New Zealand because it is the cathedral of fruit growing, it is the most favourable place in the world and where there is more production per hectare, which can reach up to 150 tons.”

One of the other reasons that led Girona growers to choose this destination is because with some of these New Zealand producers they are part of the hot weather hybridisation programme Hot Climate Breeding Programme (HCBP). It is a project for the production of apples in hot climates. The HCBP programme aims to improve apple flavour, texture, colour and adaptation to climate change, and one of the results are the first viable varieties emerging for production in hot weather.

For the president of Poma de Girona, New Zealand has a

“very good soil condition, with a lot of organic, fertile matter and a very benign climate. There are practically no hailstorms or frosts and the winters are not cold, this allows the apple tree to have a very long development with a very short winter period with very good conditions. Its apple is very strong and has a lot of colour so that the ultraviolet rays are high.” According to Frigola, “It is clear that each area is different, but there are always actions to put into practice and techniques to experiment in our home. There, they produce a very red, thick and sweet apple that they export to Southeast Asia; Twenty years ago they had smaller, more acidic apples that they sent to the European market but now, they are self-sufficient.”

Another difference Frigola sees is in the market:

“It is different because we store and serve apples for 12 months at supermarkets while they produce and make them during the six months they work each year.” Apple producing companies in New Zealand have a very important part of their production in exclusive club-type varieties that only they can produce, “they buy the production rights of these varieties. This trend is also beginning to be important among the companies of Poma de Girona.”

Girona producers’ visit to New Zealand comes after similar trips to Poland and the west coast of the United States in recent years.