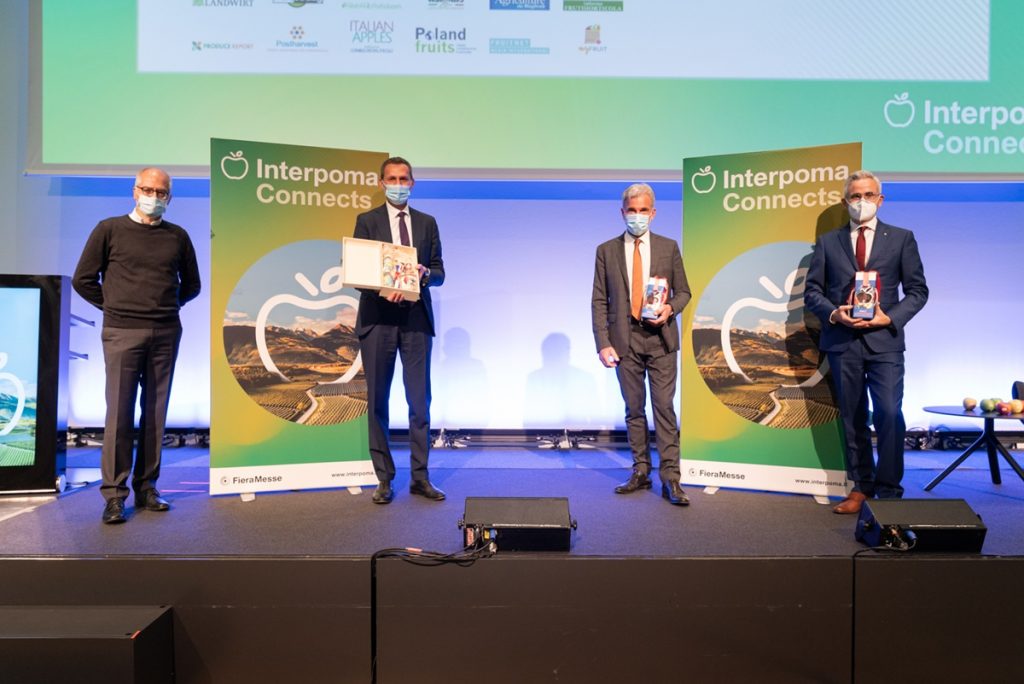 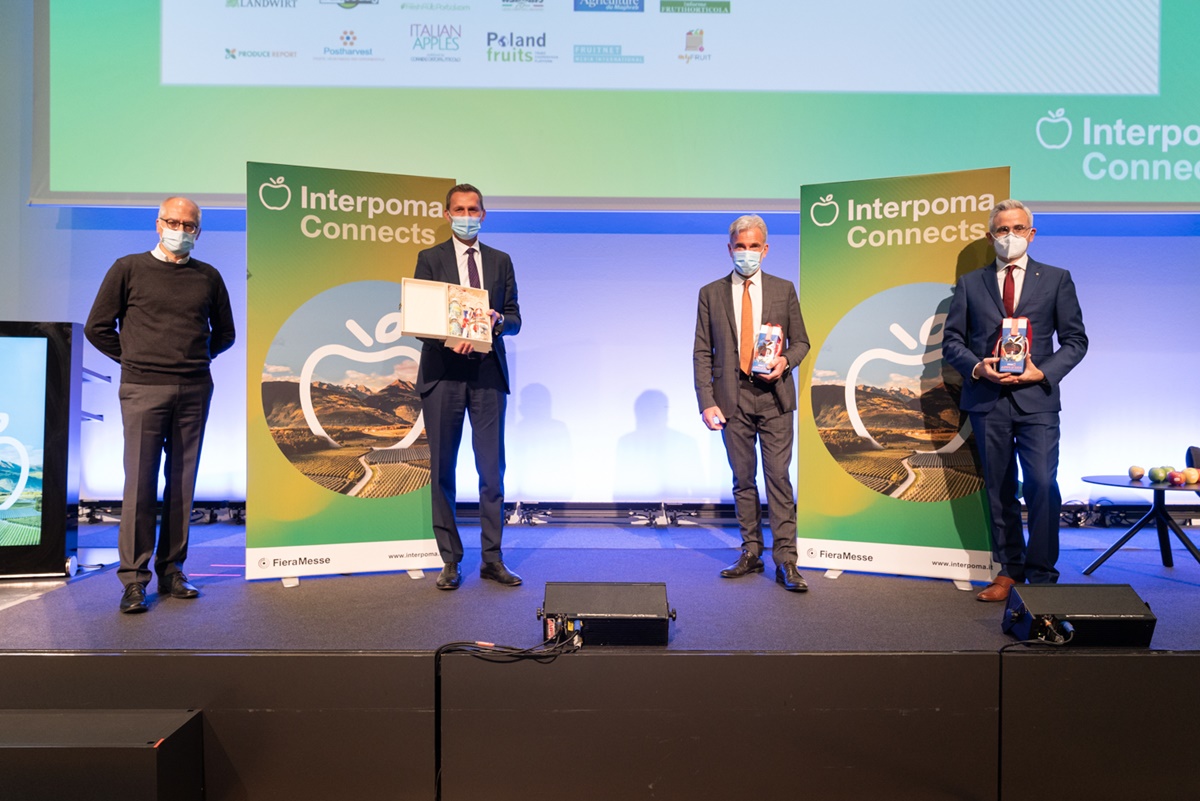 The spectrum of topics at the first digital edition of the Digital Days for the Apple Economy was as diverse as its audience. On November 19 and 20, 1.000 participants from over 50 countries followed the events and interacted with one another in a digital matchmaking event, proving that new digital event formats can create a meeting place for the international economy and maintain the important exchange between operators. At the heart of the digital event program there was of course the world-famous Interpoma Congress.

Bolzano, November, 2020 – In the first ever digital edition of the world-famous Interpoma Congress, a total of 14 international experts reported on the latest research results and laid out their view on the future of the apple economy in a compact 420-minute format.

As the first key note to take the virtual stage, Wilhelm Kremer-Schillings, who is better known as “farmer Willi” in his online blog, explained why farmers are generally popular, but their products are very often not. Urbanization, new media, the individualization of society and, above all, a lack of knowledge about the farming profession are the reasons that contribute to this phenomenon. According to Willi, creative forms of communication might be a solution: a personal and honest approach, but also an educating dialogue at eye level with the consumer might help to resolve many issues. After this more practical approach of Kremer-Schillings, Christoph Josephi from agency panama PR (Germany) provided more insight into the topic. Josephi explained that fake news are best reacted to with positive communication. Anyone who demonstrably does more than others must definitely talk about it – this also applies to the nowadays often-overstretched topic of sustainability.

Following this introduction into the topic of creative communication and sustainability, Alfred Strigl from plenum Austria presented the sustainability strategy of the South Tyrolean apple industry, called “sustain.apple”, developed together with the local key players. Based on the three areas of action, namely “The South Tyrolean apple as a model of global success”, “We feed people in a healthy way” and “Nature as a partner”, concrete measures and a timetable were drawn up to make the South Tyrolean apple industry more sustainable – environmentally, socially and economically speaking. The Biodiversity Project of the Provincial Government, presented subsequently by the Provincial Councilor for Agriculture Arnold Schuler, goes in the same direction. The project intents to make South Tyrol more biodiverse through a long-term and comprehensive biodiversity monitoring program under the direction of Eurac Research.

More exciting topics followed on the second day of the Congress: It is old news that the cultivation, storage and transport of South Tyrol’s most important export product emits tons of carbon dioxide. However, for the first time it is now possible to name the factors that may improve apple production in terms of sustainability and thus meet the needs of fruit growers and consumers worldwide. This and more formed the core of the speech by Professor Massimo Tagliavini of the Free University of Bolzano, who presented their newest study on the carbon footprint of the apple in Trentino South Tyrol.

Sustainability was also the topic of the following speaker, Alain Vialaret, ex-director of the French company Blue Whale, who presented a promising cooperative project on zero residue in agriculture. The new brand “Zéro résidu de pesticides” is everything it promises to be, as fruits and vegetables bearing this label have scientifically proven to be free of any pesticide residues. Although it has only been on the market for two years, the label is very popular in France, featuring 36 different products and a 5% market share in seven years.

On another note, but still on an environmental topic, the next speaker Luciana Tavella, Professor at the University of Turin, focused on invasive species such as the marbled tree bug or the so-called Samurai wasp, which have had a massive environmental, economic as well as social consequences, and explained which countermeasures are promising.

Finally, for the first time in its 20-year history, the Interpoma Congress dealt with what might replace the species issue in the next decade: the rootstock. For more than 100 years, the M9 rootstock has been largely without competition. This monopole however seems to have finally ended. In his rootstock module at the Interpoma Congress, Walter Guerra, chief pomologist of Laimburg Research, welcomed representatives from three promising breeding programs from Great Britain, New Zealand and the USA, to present their projects. It became clear very soon that rootstocks not only have an influence on yield and fruit quality but can also contribute to a more climate-adapted apple cultivation. Therefore, in the future, farmers will not only have to choose between new apple varieties, but also between new rootstocks.

The Interpoma Congress however was not the only highlight of Interpoma Connects 2020. With 256 participants from 40 countries and 138 virtual B2B meetings of 20 minutes each, the first edition of the Interpoma Business Match was a striking success. This digital matchmaking platform proved to have great potential and immediate benefits for all participating parties. The initiative, organized by Fiera Bolzano in collaboration with the Bolzano Chamber of Commerce and EEN Enterprise Europe Network, was free to all participants.

Finally, the Interpoma Startup Award on Friday afternoon concluded the Digital Days. 13 startups were selected, and 11 competed for the title as the best start-up company of the sector. Pixofarm from Austria convinced the eight-member expert jury the most. The app they developed enables users to obtain real-time information about the condition of the fruit and to make forecasts about the harvest based on photos. The startup thus won the competition as well as a free booth at the next edition of Interpoma from November 4 – 6, 2021.

“The number of international participants proved that Interpoma is the leading platform for the global apple industry, even in digital form. We are very satisfied with the result and were able to gather valuable experience that will now help us to develop Interpoma into an even stronger brand, with a mix of live experiences and digital content,” said Thomas Mur, Director of the Fiera Bolzano Exhibition Center.

The next physical edition of Interpoma, the international trade show for the cultivation, storage and marketing of apples, will physically take place again in Bolzano from November 4 to 6, 2021. The edition of 2021 will also witness the first Interpoma Award presented for outstanding achievements in the field of varietal innovation. Applications are accepted until August 31st 2021.