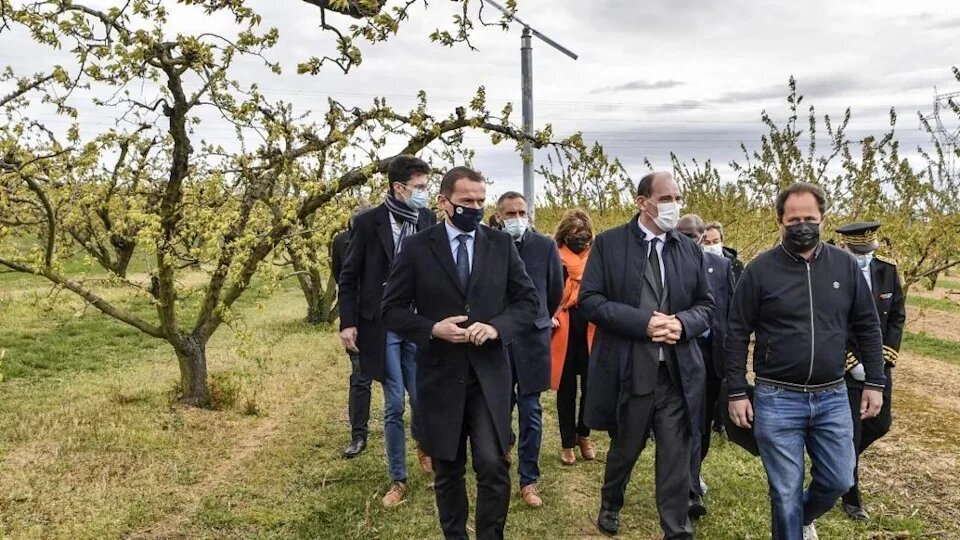 Photo by rfi.fr // After visiting a farm in Ardèche, in south-eastern France, Prime Minister Jean Castex announced plans to remove caps on compensation for agricultural disasters.

The unseasonal frosts that struck France last week are expected to have the most severe impact on the country’s agriculture in recent memory. Crops in large parts of the country face costly damage, including Bordeaux, Burgundy, the  Rhône Valley and  Provence. Grapes, kiwifruit, apricots, and apples are among the crops most affected. The bitter frost struck suddenly after a bout  of warm  weather, which  worsened the  damage.

French agriculture minister Julien Denormandi said: “This is probably the  greatest agricultural catastrophe of the  beginning of the  21st  century. Several hundreds of thousands of hectares have  been impacted.

Daniel  Sauvaitre, president of the  National Apple Pear Association (ANPP), told AFP: “Peaches, nectarines and  apricots will not be easy  to find on the  shelves this  year. The challenge is to know if there are  enough flowers left that are  still green to get  a harvest. And it’s only mid-April,  there could  still be frost  until  early  May.”