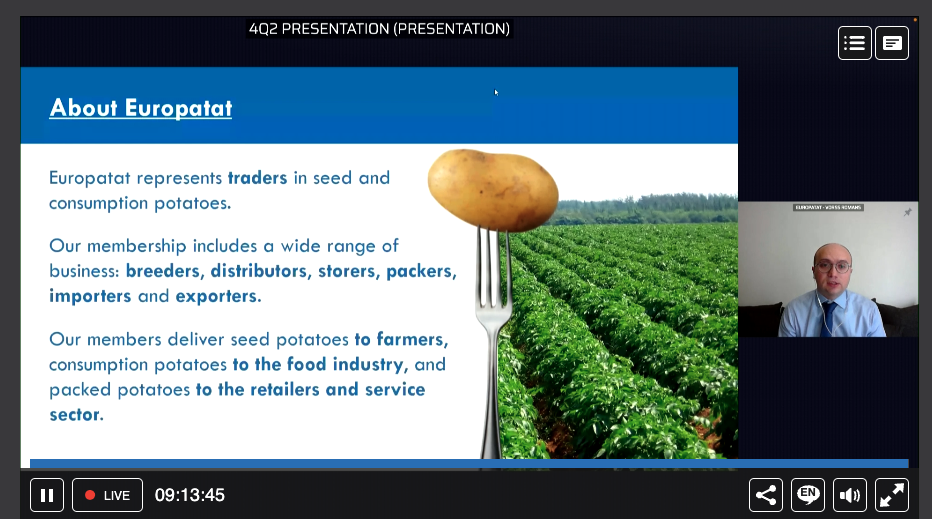 The European Parliament’s Committee on Agriculture and Rural Development held an “Exchange of views on the disruption in the EU-GB trade in seed potatoes” last week, at which Europatat was invited to speak. Europatat used this opportunity to highlight the impact of there being no agreement on the European potato supply chain.

In his introductory speech, Romans Vorss, Europatat technical director, said: “Since 1 January 2021, the European Union no longer allows the import of seed potatoes from Great Britain due to existing EU Plant Health Regulations and the lack of an agreement on equivalence requirements. The UK Government has restricted the marketing of EU seed potatoes within GB. This impasse severely affects the European potato supply chain. The non-agreement denies EU’s sector access to certain varieties which are only available in GB and limits the EU’s export opportunities to GB. Many businesses across the EU including breeders, seed traders, seed growers, and consumption potato growers are affected. This will hit the Irish industry especially hard as they rely heavily on the import of Scottish seed potatoes of certain varieties which cannot be sourced from anywhere else. These varieties make an important contribution towards EU biodiversity and food security, which is particularly crucial these days.”

Europatat called on MEPs in the Agriculture Committee and the European Commission to break the deadlock and to reach an agreement on both a transitional arrangement and a long-term solution to resume the bilateral trade in seed potatoes. It is especially important that this is done soon to avoid the possibility of regulatory divergence emerging between the EU and UK markets, further hindering the opportunities for mutually beneficial bilateral trade.

Tigran Richter, Europatat’s seed commission chairman, said: “The non-agreement affects many EU countries including Spain, France, Denmark, Poland, Finland, Slovenia and Czechia. Therefore, it is a European issue and we need an agreement between the EU and the UK. The lack of agreement could lead to bilateral negotiations between the UK and EU Member States regarding the export to GB. This may lead to misalignment and potentially unfair practices and issues of competition between countries from the bloc. We got the feeling that during the exchange of views many of MEPs supported our Europatat’s position. The question of food security, biodiversity and climate change raised by several members of the discussion makes us believe that it is time to build a new type of relationship to maintain the good businesses relationship of the potato sector that we had in the past for common efforts to meet those challenges.”