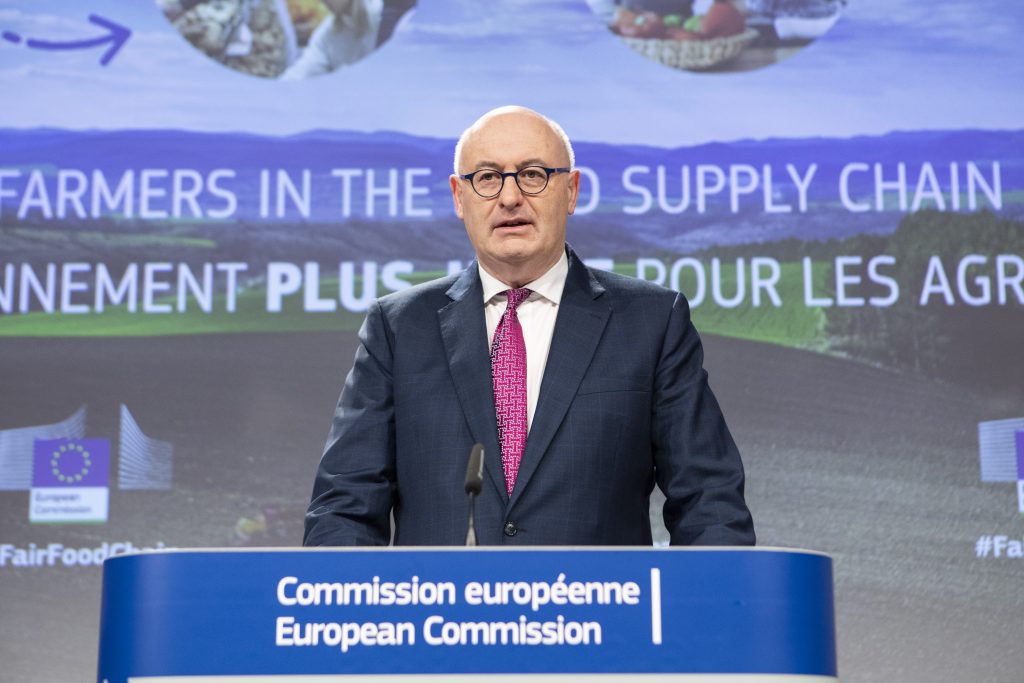 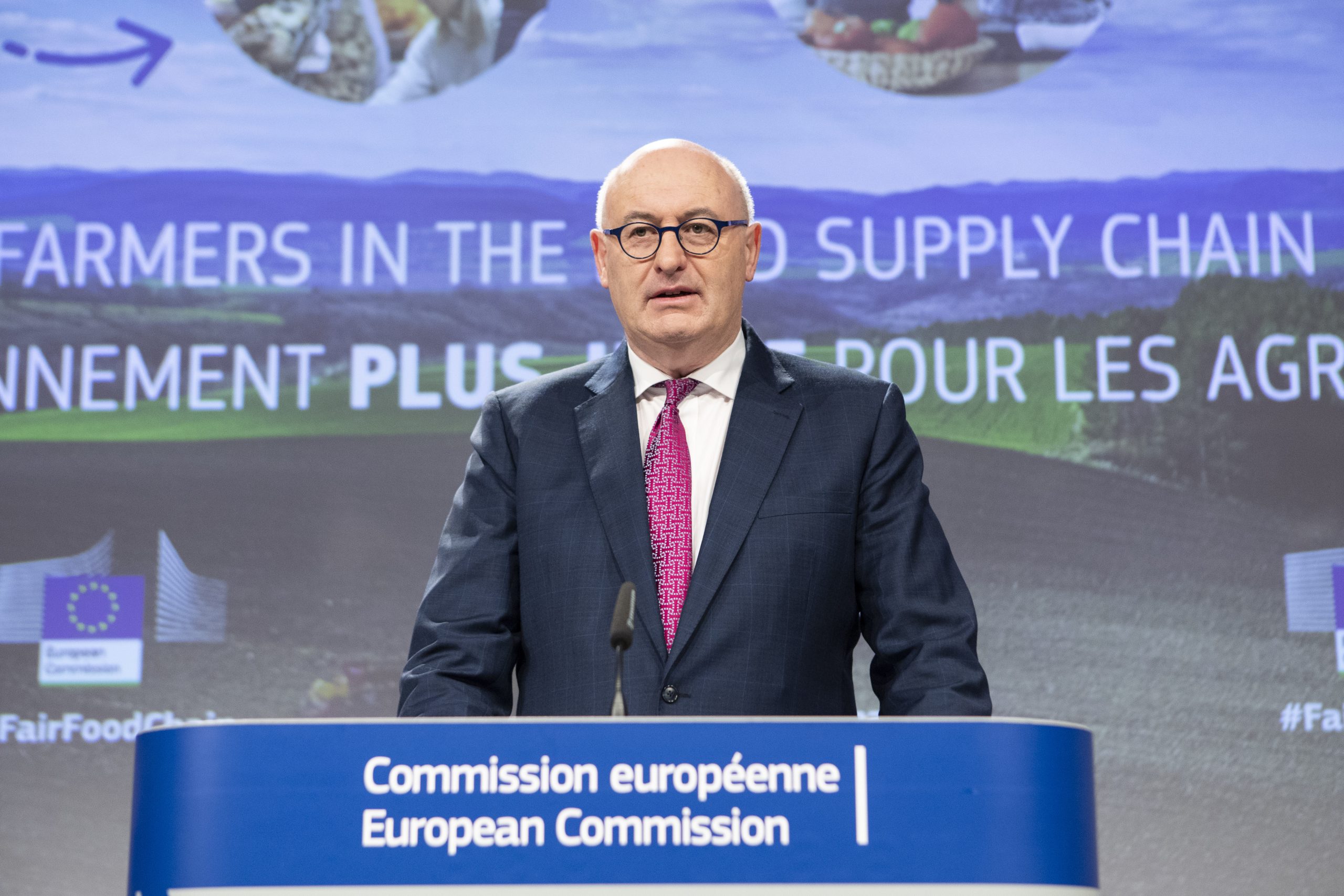 A draft EU law to help protect farmers from unfair trading practices in the food supply chain was presented by European Commissioner for Agriculture Phil Hogan on April 12. Members of the European Parliament (MEPs) described the proposal as a landmark, but one that could yet be improved. The Commission proposal would ban the unfair trading practices (UTPs) considered most harmful to farmers. These are payments later than 30 days for perishable food products, last minute order cancellations, unilateral and retroactive contract changes, and making suppliers pay for wasted products. Member states would each have to designate a public watchdog to enforce the new rules and impose “effective, proportionate and dissuasive” fines for infringement.

The goal is to reduce the occurrence of UTPs in the food supply chain by introducing a minimum common standard of protection across the EU. The protection covers small and medium-sized agricultural producers (including their producer organisations) and other small and medium-sized enterprises (SMEs) in the chain who sell food products to buyers who are not small or medium-sized. Other practices will also be banned unless allowed in an upfront agreement between the parties. These are buyers returning unsold food products to suppliers; buyers charging suppliers for stocking, displaying or listing a food product; and obliging suppliers to pay towards a buyer’s promotion or marketing campaigns. Of note, SME food producers supplying large EU buyers would be able to invoke the rules and complain anonymously about abusive practices whether based inside or outside the EU. In the proposal, the Commission says there is a widespread consensus that UTPs occur throughout the food supply chain. Agricultural producers are particularly vulnerable as they often lack the bargaining power of the downstream players that buy their products and they have limited alternatives for getting their products to consumers.

Hogan said the proposal is “fundamentally about fairness and about farmers,” He also said it was historic, being the first time the Commission had proposed legislation in this area. He added it will be followed by measures to improve market transparency. This is expected to include, by the end of 2018, moves to increase sharing of data, such as on farmgate and other prices in the food supply chain, in addition to the Commission’s existing market observatories and dashboards. The Commission has also signalled supporting measures to promote consolidation – such as the formation of producer cooperatives without fear of contravening competition laws – in the highly fragmented farming sector. The initiative comes in the wake of a European Parliament resolution in June 2016 calling on the Commission to propose legislation to tackle UTPs in the food supply chain. In its motion for the resolution, Parliament noted the fruit and vegetable sector is among those where farmers and cooperatives face an extremely critical situation. At that time, Members (MEPs) stressed that selling below the cost of production, and the serious misuse of basic agricultural foods such as fruit and vegetables as ‘loss leaders’ by large-scale retailers, threaten the long-term sustainability of EU production of such items. They urged the Commission to put forward proposals against UTPs so as to ensure fair earnings for farmers and a wide choice for consumers, and to ensure fair and transparent trade relations among food producers, suppliers and distributors. Fair trading should in turn help to prevent overproduction and food waste, they also said.

Farm groups, agricultural NGOs and politicians have generally described the plan as an important step in the right direction, while some distributors and retailers argue it would reduce competition and see consumers pay even more for food. According to Eureporter, Oxfam, Fair Trade Advocacy Office and IFOAM-EU welcomed the move but called on the European Parliament and Council to strengthen the proposal. Friends of the Earth Europe argued for complementary measures to support direct sales and short food supply chains. FoodDrinkEurope called for the proposal to be widened to cover not only SMEs but all players in the supply chain. Similarly, European Parliament AGRI rapporteur Paolo De Castro also said the proposal was constructive but should encompass all agricultural production, including flowers and feed. Copa-Cogeca chief policy advisor Paulo Gouveia said it is important to address the “fear factor” that often prevents complaints and called for additional measures including modernisation of competition law.

The two co-legislators, the European Parliament and European Council, will separately discuss amendments to the Commission proposal in coming months with a view to a common position and then final text being agreed before the Parliament elections next May. It would probably then be at least 1.5 years before the directive is transcribed into national laws in each EU state. Meanwhile, stakeholders can provide feedback on the plan until June 14.

UTP example
It is not uncommon that following an order given, a producer organisation prepares a batch (with the required grading, packaging and labelling) for which the quantities are revised downwards by the buyer (a retailer or its buying subsidiary) after the batch has left the packing station (e.g. to take into account short term fluctuation of demand at retail stage, in a just-in-time logistic approach). This means that the supplier (i) has to find an alternative outlet (usually at lower price, e.g. on a wholesale market) (ii) has to usually regrade and repack the goods not at its own premises implying extra costs and (iii) lose freshness of the product. In such cases, risks (short term fluctuation of demand) and related costs are entirely passed to the supplier (in many cases a farmer or a producer organisation) and directly result in an income decrease.

Why no outright ban on supplier contributions to retail promotions
Banning suppliers’ contributions to promotions as a general rule could cause losses to suppliers because consumers might instead buy other products, such as ones that were promoted instead. For example, if suppliers of fresh fruit and veg couldn’t contribute to promotions, retailers would have to bear the entire cost of them and might deflect the promotions to other categories of products, such as processed food products, thus negatively affecting sales of fresh fruits and vegetables.