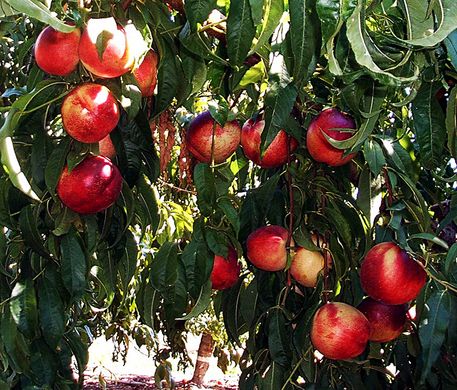 In 2017, EU producers registered a record peach and nectarine crop, with output up 9% from the previous year. The bumper harvest was due to favourable weather conditions and the planting of new, higher-yielding varieties, particularly in Spain, where productivity has risen dramatically. The region’s four leading producers, Spain (42 %), Italy (29 %), Greece (21 %) and France (5%), accounted for about 97% of overall production in 2017. Since 2012, Spain’s share has increased significantly at the expense of Italy and France.

In 2018, the European producers’ association for the peaches and nectarines (EuroPech) expects production to fall by 11% (7% below the 5-year average), due to frost and hail during flowering in Spain, Italy and France. Spain’s output is forecast to fall 14%, France’s by 16% and Italy’s by 10%. Bucking the trend, Greek production is expected to rise 20%. However, as the producers’ association has in the past significantly underestimated the final result, we should wait before making any assumptions.

In 2017, average producer prices were low from mid-July due to oversupply, with large price differences between France and other main producing countries. These price differences are partly due to differences in productivity and labour costs, marketing strategies and product quality. Price levels tend to be higher in France, where local products are in great demand.

Prices for the new early-maturity varieties were higher at the beginning of this campaign than in the same period in 2017, because of the delayed start to the 2018 season. When the Greek and Italian peaches entered the market along with the delayed early-maturity varieties from Spain, prices fell slightly below the levels recorded at the same time year in 2017. Consumption appears to have risen slightly over the past five years to around 6kg per capita, although the weather has played a factor here too.

While the bumper 2017 harvest saw EU peach exports rise slightly, 2018 should see a fall of around 20% due to lower production and difficulties on the export market. Until Russia introduced its import ban in 2014, it was the largest export market for the EU’s fresh peaches and nectarines, in terms of both volume (54%) and value (56%). Following the ban, exports to Belarus, Ukraine and Switzerland increased, but not by enough to offset the loss of the Russian market, causing the EU’s total exports to fall by 25% between 2014 and 2017. Meanwhile, EU production increased by 5% over the same period, triggering price pressure. The European Commission withdrew 175,000 tons of peaches and nectarines to support producers through this difficult time. 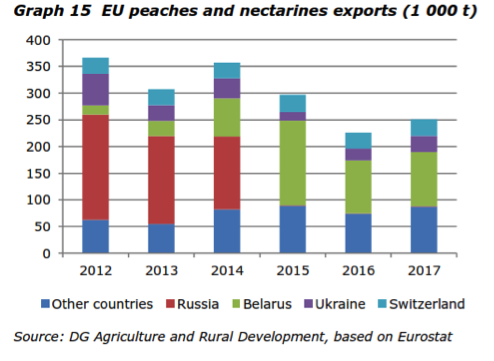