Be it going carbon neutral – or carbon negative, climate positive or beyond carbon neutral – the food industry is increasingly feeling the heat and responding with plans to address emissions.
Wed 26/10/2022 by Julie Butler

Ecovalia
This graphic shows a difference in GHG emissions from conventional vs. organic orange and mandarin trees.

Target
Target’s carport is covered by a solar canopy which connects to the electrical system at the back of the store. 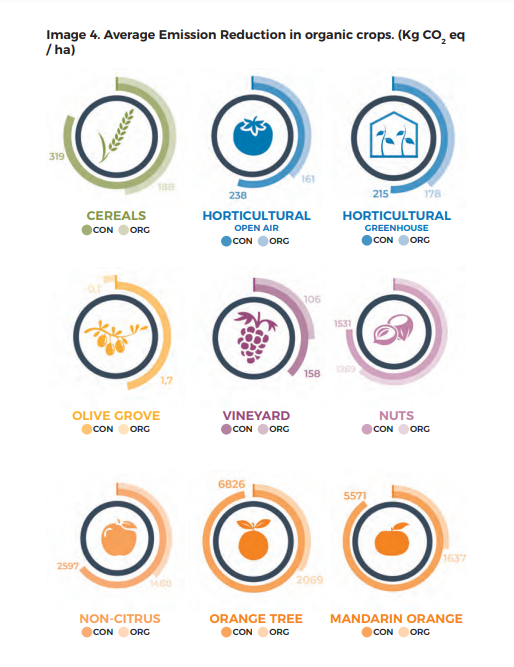 This graphic shows a difference in GHG emissions from conventional vs. organic orange and mandarin trees. 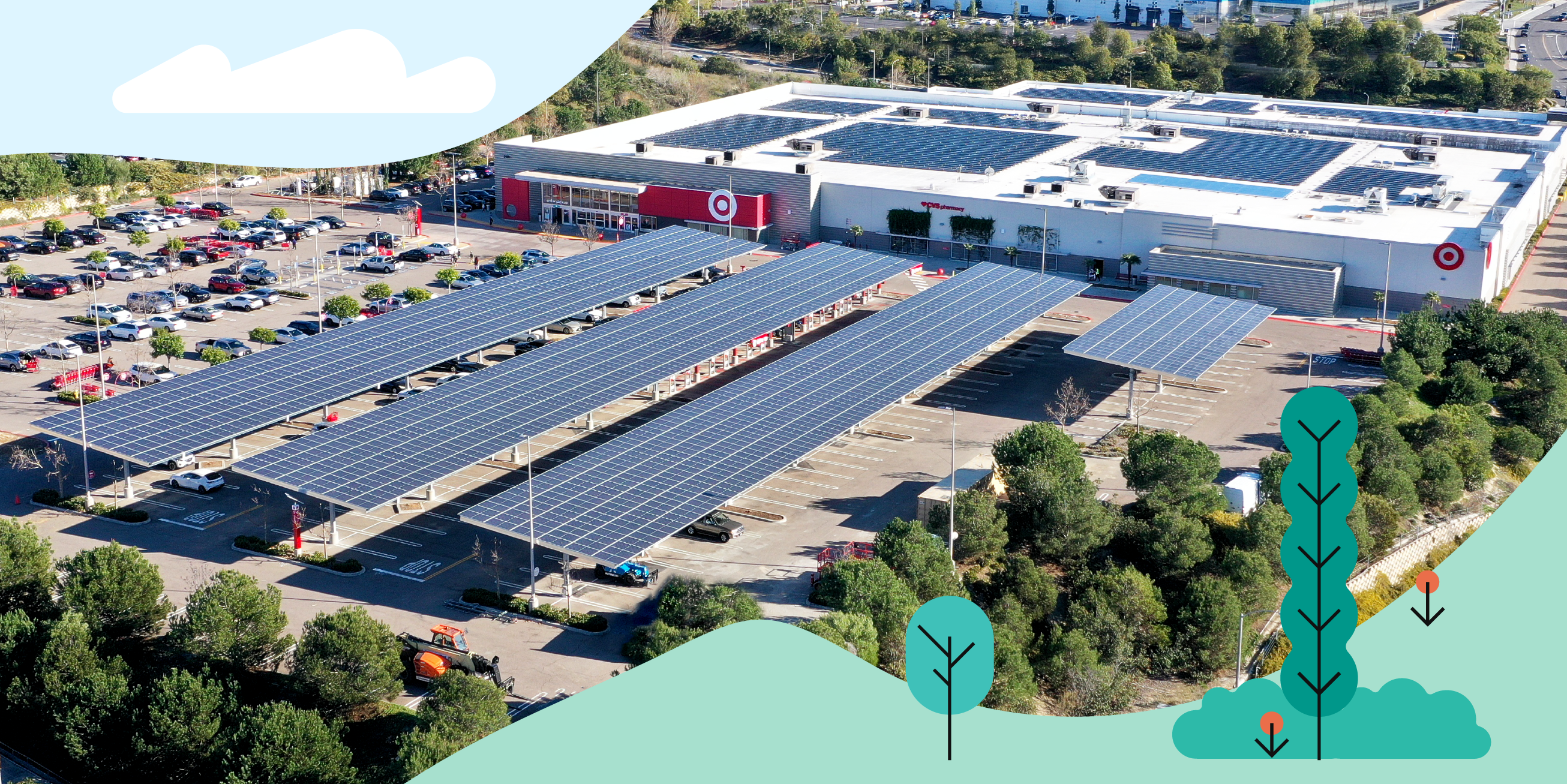 Target’s carport is covered by a solar canopy which connects to the electrical system at the back of the store. 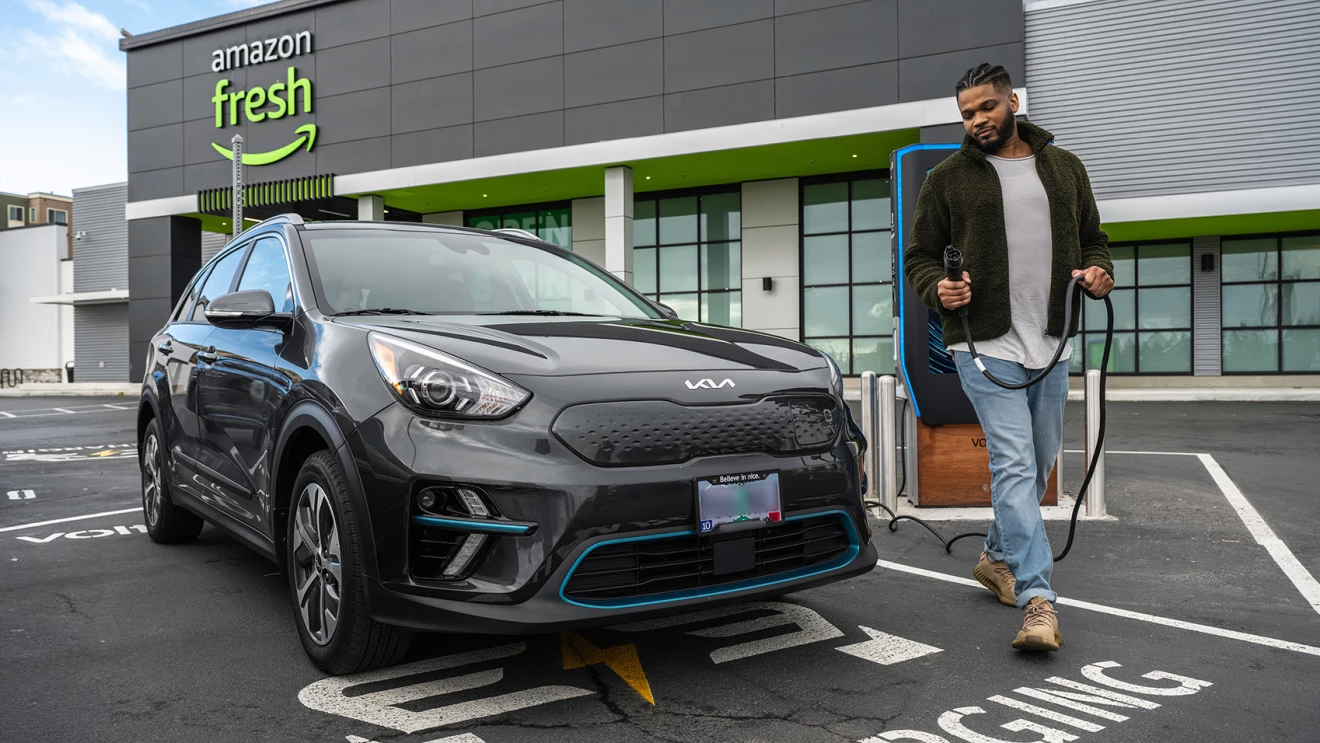 Free electric vehicle charging for customers is among the features of America’s newest Amazon Fresh store.

With the world facing one of the biggest challenges of the century – how to address climate change while ensuring food for a growing population – major players from farm to fork are making promises to do more to protect the planet. Examples range from meal kit company HelloFresh introducing ‘Climate Heroes’ – tags on recipes that denote lower carbon footprints – to the world’s largest retailer, Walmart, aiming to be zero emissions by 2040; the increasing popularity of urban and vertical farms using energy-efficient LEDs; and multinational avocado supplier Westfalia achieving a carbon neutral standard for 15 of its businesses. Here we look at further ways in which key players, including farmers and retailers, are reducing their carbon footprints.

Surveys show a key factor driving up organic consumption is a shopper perception that organic farming is better for the planet. But what can be learnt from existing research about organic methods and climate change? According to a technical report summarising the current state of knowledge, recently released by Ecovalia (the Spanish professional association for organic production), though fruit trees are associated with generally high GHG emissions per hectare, this is less the case for organic ones because of their better carbon sequestration and the fact synthetic fertilisers are not used. The research shows organic fruit trees are associated with lower GHG emissions than conventional ones, both per hectare (47-90% less in the case of orange trees) and per kg of product (44-69% less for orange trees). The Ecovalia report also says carbon sequestration by organic fruit trees is facilitated by wider use of cover crops, the use of organic amendments (e.g. compost), and incorporation of pruning residues in the soil. Research shows organic farming also has a high potential for adaptation to the impact of climate change and resource depletion, mainly through biodiversity management, organic matter management, and reduction of external inputs such as synthetic fertilisers and pesticides.

At its 26th Amazon Fresh grocery store in the US, in Seattle, Amazon will incorporate features including a CO2-based refrigeration system, the use of steel byproducts in the concrete flooring to reduce the embodied carbon, a fully electric kitchen, and use of 100% renewable electricity to power the 3,250 m2 store. Customers shopping in-store will be able to choose from a variety of Climate Pledge Friendly products including grocery items, plus organic produce. Excess food will be donated to local food banks. Amazon has applied for International Living Future Institute (ILFI) Zero Carbon certification for the store, making it the world’s first grocer to seek the certification. Target, meanwhile, has applied for ILFI net zero energy certification for its most sustainable store to date, located in California, where it will generate renewable energy through 3,420 rooftop solar panels and newly installed carport canopies. The store will also feature CO2 refrigeration. Another leader in climate initiatives is Switzerland’s Migros Group, which aims to be ‘net zero’ on GHG by 2050. Under its M-check system, star ratings on Migros packaging show consumers how products perform in terms of CO2 and animal welfare. Also in Switzerland, climate protection projects by retail group Coop include an agroforestry programme in which rows of standard fruit trees and wild fruit trees are planted on arable or pasture land, thereby sequestering CO2. Both Migros and Coop collaborate with Zurich-based climate protection foundation ‘myclimate’.