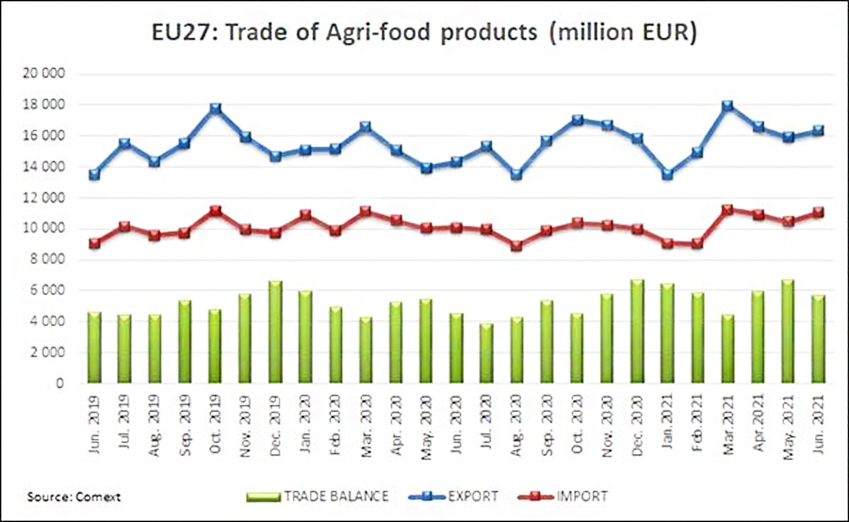 Despite a slow first quarter, the total value of EU agri-food trade (exports plus imports) for January-June of 2021 amounted to €157.1 billion, reflecting a 3% increase on the same period in 2020. Exports rose by almost 6% to €95.3 billion, while imports fell by 1% to €61.8 billion, giving a total agri-food trade surplus of €33.5 billion for the first half of the year. This is an increase of 21% compared to the corresponding period last year. However, there was a significant drop in the value of vegetable exports (down €177 million), as well as in the value of imports of tropical fruit, nuts and spices (down €733 million) and fruit juices (down €175 million).

For January-June 2021, the value of exports to the UK fell more than exports to any other country, down €446 million or 2% compared to the first half of 2020. Similarly, the overall decline in agri-food imports to the EU was largely driven by the reduction in imports from the UK, down by €2 billion or 30% on the same period last year.

Despite the overall increase in agri-food exports, exports to a number of countries declined compared the same period of last year. This includes those to Saudi Arabia (down €341 million), Algeria (down €107 million), South Africa (down €98 million) and Kuwait (down €89 million). Aside from the sizeable decrease in imports from the UK, there was also a decline in imports from the United States (down €522 million), Ukraine (€285 million), Vietnam (€165 million) and Moldova (down €131 million).