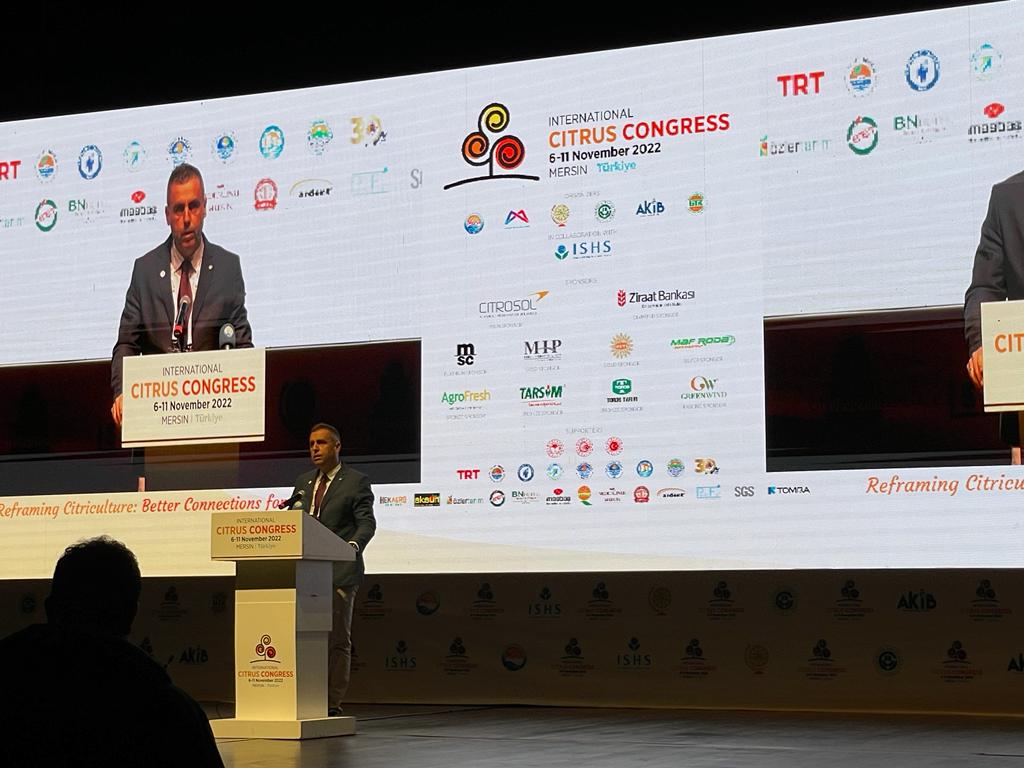 From November 6 to 11, the Turkish city of Mersin hosted the 14th International Citrus Congress, a forum where numerous scientific activities, conferences and workshops were held with the aim of highlighting the importance of citrus at a global level and determining the factors and new policies that will shape its future. As the main sponsor of the congress, Citrosol had the opportunity to allow citrus researchers, farmers and operators around the world to learn about its work and its catalogue so that they can “verify that with our scientific rigour and spirit of continuous improvement, we are the leaders in the post-harvest of citrus fruits”, said CEO of the company, Jorge Bretó.

In the area dedicated to post-harvest, the presentations of the Citrosol scientific team occupied a good part of the programme. The firm’s R+D+i director, Dr Javier Parra, and Dr Benito Orihuel, postharvest advisor, presented in the opening speech on the second day the development of precision postharvest technologies for rot control. In this presentation, the speakers took attendees on a tour of the various milestones and technological developments that have allowed Citrosol to position itself as a benchmark in citrus rot control, starting with drencher treatments and the so-called first treatment, up to the release of the Citrosol Vertido Cero® System, launched on the market in 2010, which was later complemented by the development of the Easy Kit®, which allows checks of rot control treatments.

Javier Parra also spoke at the “Residue Free Citrus Fruit” workshop, where he exhibited the recently launched Citrosol Greencide®, a formula treatment based on plant extracts that can achieve rot control without leaving phytosanitary residues.

The presentation of the new Citrosol tools to control cold damage was given by Drs. Rafa Torregosa, Benito Orihuel and Celia Murciano. The excellent results aroused great interest among attendees from countries such as South Africa, Peru or Australia, all of which are very distant from traditional consumer markets but where there is susceptibility to pathogens such as Cladosporium ramotenellum or the various species of Cladosporium sp, which cause the appearance of a greyish cottony mould on the calyx of the fruit, during transcontinental shipments of citrus where cold treatments are applied to control various pests.

The speakers also highlighted the experience and work accumulated by Citrosol in the detection and management of resistance to fungicides in the control of rot caused by the Geotrichum fungus, which manifests as a soft rot with a sour odour that disintegrates the skin and pulp of the fruit.

Parallel to the Congress, the participants were able to learn first-hand about the Turkish citrus industry in a visit to plantations and a packaging house of the Özler Tarim firm, one of the leading citrus companies in Turkey. During this visit, Citrosol had the opportunity to present its application, control and traceability technologies, since the plant is equipped with Citrosol solutions.