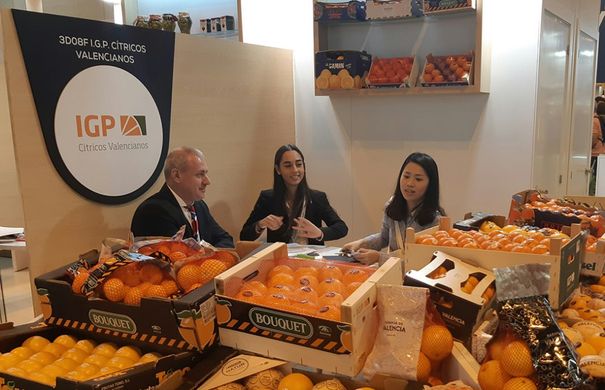 At Fruit Attraction 2018, the Protected Geographical Indication Cítricos Valencianos held 23 meetings with importers from Asia, traditional Europe, Eastern and Third Countries. The overall evaluation of the meetings was “very positive and enriching.”

“This year a total of 23 interviews have been attended, whose stakeholders have come from different destinations around the world. The majority were the countries of the traditional Europe (Germany, Italy, the UK, Ireland, Sweden, Holland and Malta), which accounts for 35% of all the importers that visited us. It is also important to highlight the growth in interest of Asian countries (China and the UAE), which accounted for 22% of the interviews. Chinese importers are increasingly demanding oranges from the Valencian Community and are beginning to distinguish the quality that differentiates them, especially in colour and flavour. In our sector, we know very well that the Chinese consumer values ​​the European product, and that with a bit of luck we can put Spain on the map.”

The manager of the IGP added,

“The rest of the interviews were with interested parties from Eastern Europe (17%), such as Poland, Latvia and Belarus, while 13% were from the domestic market, and another 13% from less common countries such as the United States, Chile and Cape Verde.” Sanz also pointed out, “Participating in this fair is essential for an entity like ours, firstly for the contacts that are made, and then for the visibility of our brands. The fair also allows us to receive visits from producers and new operators interested in receiving information about registering with our IGP. It is also an opportunity to meet the media and inform them about the current situation of our organisation and assess the latest developments and projects that we have underway.”